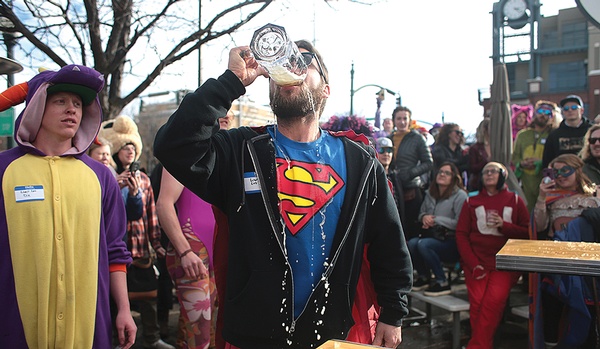 Rejoice, good people. A Rockin’ Snowdown is upon us! Consider this an expert’s guide to a most excellent Snowdown experience. It’s like the classic drinking game, Thumper. What’s the name of the game? Snowdown. Why do we play it? To get effed up.

By the time you read this, Wednesday events will have come and gone. True Snowdown revelers will be operating on a rotational buzzed/drunk/hangover calendar by this point. After all, life’s a circle and Snowdown is no different. Smash a couple of Bloody Marys and you’ll be good.

Simultaneously, the Highway 3 Roadhouse hosts the Rockin’ Rollin’ Oyster Slurpin’ Contest at 4 p.m. It’s simple. How many oysters can you slurp down in one minute? The world record for three minutes is 233. I’d suggest a 16-oz. can of PBR to pair with a tray full of the delectable slimy goo.

The Derailed Pour House hosts a Rocky Mountain Oyster Eat Off at 6 p.m. tonight. The champion who chomps the most bull balls wins. These are our official state delicacy, folks. Pride up! A proper plate of Rocky Mountain oysters should be paired with an icy schooner of Coors Banquet. No other beer will satisfy.

The finals of the Magical Mystery Musical Tour begin at 6 p.m. tonight at the Irish Embassy Pub. My crew – Ted Holteen, Bryant Liggett, Bill Doherty and I – will be calling ourselves Udo Dirkschneider, after the diminutive lead singer of the seminal German heavy metal group. We don’t have an official beer because it’s tough to come by an 11-oz. grenade of Olympia at most bars. Defeat is unacceptable for Udo.

The Snowdown Beard Growing Competition ends at 8 p.m. tonight at Carvers. Contestants were shaved clean in November. As of this writing, the lads are substantially furrier. Prizes will be awarded in a variety of categories. Beardos love suds. Pair with a pint of your frothiest Carvers ale.

Friday is the pinnacle of Snowdown madness. The Bed Races between 7th & 8th on Main are must-see comedy, particularly if you’ve tailgated with THC-infused Oh-Hi seltzers an hour before. Stick around for the annual Snowdown Light Parade at 6 p.m.

At 7:30 p.m. Friday, the Snowdown Follies kick off at both the Hank and Durango Arts Center. If you weren’t lucky enough to score tickets, you can watch a videocast at the ACT. At 10 p.m., the rooms will be cleared for a second staging. Rinse and repeat for Saturday. Vodka tonics and Old Fashioneds are preferred drinks for Follies.

For the late-night revelers, such events as a No Pants Snowpants Dance takes place at the Starlight (wear anything but pants!) at 9:30 p.m. and a Pole Dancing Contest at 10 at the Wild Horse take place. What could possibly go wrong? Jello shots of

Sex on the Beach would be a nice touch.

At noon on Saturday, the Outlaw Josie Pete Golf Tournament tees off at dozens of watering holes across downtown. Contestants (sorry folks, this one filled up a long time ago) get dressed up and play 18 holes of mini-golf, usually slamming a shot at each establishment. I plan on posting up at Durango Craft Spirits with a Sheriff Thompson or two (that’s a Mule made with Cinder Dick Bourbon, for those unfamiliar. Drink one and set your soul free!)

Head down to the La Plata County Fairgrounds Exhibit Hall from noon ‘til 2 Saturday for the Snowdown Chili Cook-Off & Bloody Mary Contest. I’ve never entered either, but hear that the suds and stew are worth the wait. Tasters cost 50 cents for chili and $1 for Bloodies. In the chile wars, prizes will be awarded for best red, green, vegetarian and salsa.

Broomball faces off at 1:15 Saturday afternoon at the Chapman Hill Ice Rink. Because six-person teams will be running around the ice at a city facility swatting each other with wood-handled brooms, alcohol is strictly taboo and those who violate this policy will receive citations. Aside from that, I hear it’s a hoot.

Outhouse Stuffing takes place at Gazpacho’s at 2 p.m. Saturday. I pulled aside Gaz-honcho Matt Arias last weekend and asked if he hosted the event because of Gazpacho’s notoriously small bathrooms. He chuckled and said it had something to do with a porta-potty vendor leaving one in the parking lot at the end of a reconstruction job. Needless to say, nobody has ever asked me to join their outhouse stuffing team. However, it’s a great chance to chug a house margarita while watching the buffoonery around you.

I’ve heard that the Josie Pete’s awards party at the Elks Lodge at 4 p.m. Saturday is the pinnacle of drunken debauchery. Kenny B. spins the tunes, and it’s rumored that event organizer Joe Leder will dress as Slash or some other ’80s rock icon who long ago jumped the shark.

In keeping with their family-friendly theme, the Starlight hosts the Best Chest in the West contest at 9 p.m. Saturday. Both guys and gals will try to rack up prizes. At this stage in Snowdown, martinis are the only way to fly.

Sunday’s slate is rather light, given that Super Bowl game of footie football that takes place the same day. Carb up at the Pancake Breakfast hosted by La Plata County Search & Rescue at the Fairgrounds from 7 a.m. ‘til noon. A handful of events like billiards, Texas Hold ‘Em and a Snowdown truck pull are also slated. Me? I’ll be prepping for my annual Wild Game Super Bowl Party on Sunday morning. I believe my main course this year will be quail stuffed with sausage and rubbed with sage from the garden. Others are rumored to be bringing whitetail deer steaks, slabs of salmon and elk neck stew. I also have a couple of growlers filled with the last of BREW’s excellent Queen of the Wood to pair with Stilton cheese and candied nuts during the pregame tapas hour. Go Chiefs!

They’re gonna break their chains? Email be at chrisa@gobrainstorm.net.