Papadosio, Windswept and Tigers for the win 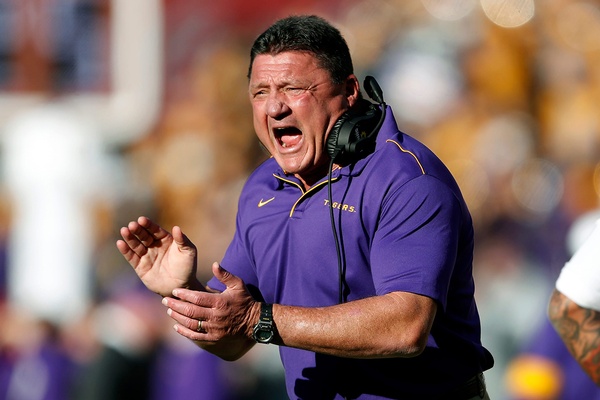 The college football playoffs all comes down to Monday night’s championship tilt between LSU and Clemson (6 p.m. kickoff), which is something difficult for a diehard Alabama fan to acknowledge. Last January proved that Clemson had overtaken my Crimson Tide as college football’s premier program. LSU and their affable, frog-voiced head coach, Ed Orgeron, crashed the SEC party in the 2019 regular season, thanks in no small part to an unstoppable offense. Picking a team to root for is easy for me. Picking a winner, much more difficult.

Orgeron is the type of guy you want to live next door to. Let’s face it: the world would be a better place if the voices of Siri and Alexa were replaced with Ed’s voice. Think Blake Clark as the Old Cajun Man in “Joe Dirt” or Farmer Fran in “The Waterboy” and you get the picture. Understanding Coach Ed isn’t easy – it’s kind of like watching a foreign film without subtitles – but it’s always worth the effort.

Case in point: LSU quarterback Joe Burrow had a game for the ages in a 63-28 semifinal win over Oklahoma a couple weeks ago, completing 29 of 38 passes for 493 yards and seven touchdowns while rushing for another score. In the first half alone, he was 21-of-27 passing for 403 yards and had all seven of his passing TDs. In his post-game, on-field interview Coach Ed waxed poetically about Burrow’s efforts. Trouble is, few people outside Louisiana had any freaking idea what he said. Trust me, I hit rewind on the broadcast several times and listened to clips online. I can cook a mean gumbo, but I am not well versed in Cajun. I suppose that’s why “Swamp People” uses subtitles.

I do know this: there’s no coach in college football that I’d rather sit down and split a 12-pack of Dixie Beer with at a backyard cookout. For that reason and that alone, I’ll be rooting for the purple and gold on Monday. America needs Coach Ed to get a ring.

On the other hand, you have Clemson attempting to do something few other programs have done: win three national titles in four years. Alabama pulled off the feat between 2009-12, but all three wins came in the one-game BCS national championship era. They didn’t have to survive semifinal years each year. Notre Dame finished first in the AP Poll in 1946, ’47 and ’49, but there was no championship played on the field back then. Minnesota finished atop three straight years of polls from 1934-36, but those were during the leatherhead days. Going back to the late 1800s and early 1900s finds California, Yale, Michigan and Princeton laying claim to the accomplishment.

LSU’s route to the championship was harder, with Ohio State lying in their path. I’ll argue that Ohio State was the best team in the country this year. But LSU gutted out a 29-23 win, fueled by a series of instant replay-reversed decisions that benefited them.

Championship teams overcome adversity, and Clemson has demonstrated that over the past four seasons like no other. Clemson’s coach, Dabo Swinney, has modeled his program after Nick Saban’s Crimson Tide. I’m convinced that upon Saban’s retirement, I’ll be shouting “Roll Tide” with Swinney as his replacement.

Monday’s game is a Brady vs. Manning, Bird vs. Magic kind of moment. LSU’s Burrow and Clemson’s Trevor Lawrence are quarterbacks that will define an era at the professional level, with Burrow almost certainly the No. 1 pick in this spring’s NFL draft and Lawrence the same in 2021. Both men make smart decisions, are capable scramblers, and possess cannons for arms.

Although I’m rooting for LSU, I fear that Clemson’s big game experience and will to win will be the deciding factor. My gut tells me it’ll be a high-scoring affair, with Clemson eking out a last-minute victory to shower the Louisiana Superdome in orange.

One way or the other, I predict the Tigers will win the national championship.

The progressive rock group Papadosio plays two nights at the Sheridan Opera House in Telluride at 9 p.m. Friday and Saturday. Falling somewhere between rock, jazz and electronic mayhem, Papadosio strives to create music that is strangely familiar yet celebrates unique music in a constantly changing world. Their latest tour brings the vibe of a packed Red Rocks show (which they did last May) to more intimate venues. The Jauntee opens.

Cancellation notice: The Animas City Theatre had scheduled reggae night with Grammy-winning Morgan Heritage plus Niceness and master of ceremonies Rasta Stevie on Wednesday, but a family emergency has forced a cancellation. Refunds can be issued at point of purchase.

New concert announcement: KSUT’s winter concert series begins with the Grammy-nominated Che Apalache at 7:30 p.m. on Tues., Feb. 25, at the Henry Strater Theatre and tickets went on sale this past Monday at ksut.org. The band, whose name comes from the Spanish words “che,” a casual greeting (“buddy” or “man”) and “Apalache,” or Appalachia, is an acoustic string band based in Buenos Aires, with members from Mexico, Argentina and the United States. They’ve taken the festival world by storm this past year, and their second album, “Rearrange My Heart,” was just nominated for a Grammy in the Best Folk Album category.

You gotta be a football hero? Email me at chrisa@gobrainstorm.net