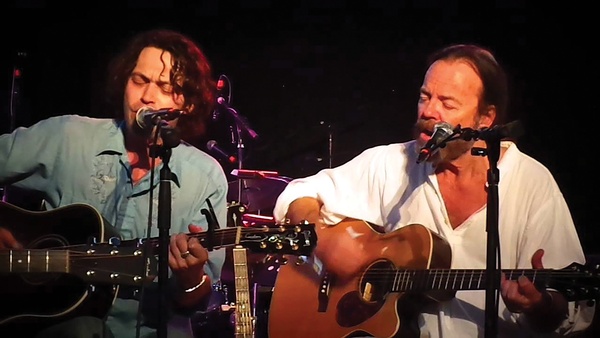 Dustin & Kevin Welch bring "Soldier Songs and Voices" to the Durango VFW at 7p.m. on Sunday.

America: Love it or leave it. Few phrases draw my ire more than this one. I love America. And I’m pissed as hell at what we’ve become. I have no plans to leave it. Expressing public dissent is as American as baseball, apple pie and Chevrolet. Ever since Donald Trump announced his presidency, he’s set out to divide us. I always felt this was more his M.O. than actually winning the presidency. Along the way, something unusual happened: his rhetoric struck a nerve in the working class, particularly in blue collar rust belt states. The election essentially was decided by fewer than 78,000 votes in Pennsylvania, Wisconsin and Michigan.

The rhetoric reached a peak this past weekend when President Trump suggested via Twitter than progressive Democrat congresswomen go back to the countries they came from and help fix those totally broken and crime infested places. Three of the four – Reps. Ayanna Pressley of Massachusetts, Alexandria Ocasio-Cortez of New York and Rashida Tlaib of Michigan – were all born in the U.S.; Rep. Ilhan Omar of Minnesota was born in Somalia,
but immigrated here when she was a small child. His tweets are among his most factually incorrect since his bizarre July 4th speech in which he cited the Army’s control of airstrips as critical to success in the Revolutionary War (pro-tip: the Wright Brothers’ first successful flight was Dec. 17, 1903 – some 120 years after the Revolutionary War). Yet I digress.

Suggesting someone return to their country of origin is racist. It’s racist if you shout “Go back to Africa” at an NBA game. It’s racist to have yelled “Go back to China” to an immigrant who helped build the railways in the 1800s. For our president to make such a comment today? It’s racist. These four congresswomen aren’t leaving. And neither am I. Instead, we’ll do what Americans have always done when facing a crisis: Put the nose to the grindstone and solve the problem.

Musicians are at the forefront of the resistance, stomping out racist, sexist and xenophobic tweets by doing what they do best: write protest music just like Woody Guthrie, Bob Dylan and Chuck D did. Music heals us. Shut up and sing, my ass.

I’m inspired by musicians like Jason Isbell, the Drive-By Truckers, Margo Price and Kyle Craft. I don’t need another song about a fast car or a night of binge drinking. I seek music with a message. And, yes, I hope it has a driving beat and a good riff.

The Animas City Theatre presents Ezra Bell and The Copper Children at 7:45 p.m. Tuesday. Ezra Bell was founded around the irreverent and introspective songwriting of Benjamin Wuamett, carving a wide path through a musical spectrum that brushes up against folk, jazz, blues, rock, pop and R&B. The Portland-based group was formed in 2013, and its once revolving cast of characters settled into a core lineup of Darren Moore (jazz bass), Tom Trotter (drums), Aaron Mattison (horns) and Jeremy Asay (multi-instrumentalist) that provides an unsettling backdrop for Wuamett’s playful and sometimes vicious vocals. They’ve been hailed by Paste, Vortex and No Depression as “charming,” “riveting” and “most impressive.” Denver’s Copper Children is a folk band that blends original soul and psychedelic rock into what they’ve deemed “psychedelic gospel.”

The ACT & Prohibition Herb present the second in a four-night, four-month Battle of the Bands at 8:30 p.m. Saturday. This time around, Red Eyed Djinn, Your Bones, Ashes of Jupiter and Diabolical Sound Platoon compete. The winning band advances to the series finale on Sept. 21, where the grand champion will receive a cool $1,000.

Music in the Mountains takes a swing at big band at 7 p.m. Friday with “Ella, Louis & Friends” at the Community Concert Hall. Conductor and trumpeter Byron Stripling and vocalist Carmen Bradford light up the stage as they take listeners on a journey through the most famous duets and solos by two of jazz’s greatest legends – Ella Fitzgerald and Louis Armstrong. They’ll be accompanied by the Festival Orchestra. It’s just one of several MITM events this week. For a complete schedule and tickets, visit www.music inthemountains.com.

This week’s free Concert Hall @ The Park show at Buckley Park goes local with the M.C. Curry Organ Trio featuring Ryan McCurry, Kevin McCarthy & Clay Lowder from 5:30-7:30 p.m. tonight (Thursday, July 18). McCurry (Hammond organ), McCarthy (guitar) and Lowder (drums) began playing as a trio in May, but have been longtime friends and bandmates for years. McCurry has long aspired to form an organ trio influenced by Dr. Lonnie Smith, Brother Jack McDuff, Jimmy Smith and Joey DeFrancesco. Timing and chemistry aided his vision, with McCarthy’s guitar stylings adding jazz and blues to the mix, with Lowder’s passion for jazz, Latin, rock and blues adding a solid foundation and tasty fills. As always, bring your picnic, lawn chairs and the whole family for a great night of entertainment.

The Telluride Americana Music Fest takes over the Sheridan Opera House tonight through Sunday. Headliners include Jack Ingram and Bonnie Bishop (tonight), John Fullbright (Friday) and Kevin Welch (Saturday), with an undercard of a host of talented singer/songwriters and musicians. A full schedule and tickets are available at Tellurideamericana.com.

Speaking of Kevin Welch, he and his son, Dustin Welch, will bring “Soldier Songs and Voices” to the Durango VFW at 7 p.m. Sunday. Through this organization, the Welches have created change in the lives of veterans and active duty military through songwriting and music. Founded by Dustin in 2011 in Austin, Texas, it’s grown into a nationwide program that provides instruments and songwriting lessons to veterans and military members. The elder Welch is an acclaimed songwriter and Americana/country artist who has released eight studio albums during his career and founded the Dead Reckoning Records label. His songs have been recorded by the likes of Waylon Jennings, Garth Brooks, Trisha Yearwood, Don Williams and Ricky Skaggs. The event includes dinner at 6, followed by the concert. Donations will be accepted.

Finally, And Then Came Humans plays this week’s Ska-B-Q from 5-7 tonight at the World Headquarters in Bodo Park. With origins in Cleveland and New Orleans, the guitar-and-drums duo of Mike Sopko and Ryan Scott Long blend jazz, rock, funk, hip-hop and experimental music into an energetic sound. They’re touring in support of their debut release, “In Heat Wave.”

What we need is awareness? Email me at chrisa@gobrainstorm.net.