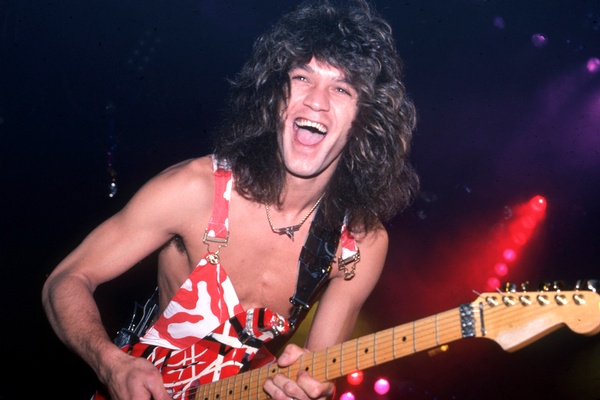 Eddie Van Halen went to the big rock concert in the sky Oct. 6

Backstage at the RockyGrass festival is a surreal place. The St. Vrain River winds through oaks and cottonwoods into a small, short, red rock canyon before dropping into the north Boulder County hamlet of Lyons and moseying out across the high plains.

Aside from a few tour buses, there aren’t many vehicles backstage. Artists typically park on the sides of the festival grounds … unless your name happens to be Tony Rice. If it is, you’re allowed to drive your Mustang to the side of the stage, usually within minutes of your scheduled performance.

The man considered the most influential and talented bluegrass guitarist of all time died on Christmas morning while making coffee. He was 69.

I didn’t know who Tony was until 1998, when he was omnipresent at the 25th annual Telluride Bluegrass Festival. He performed with Out of the Woodwork, a supergroup of sorts of Southern California bluegrass and folk alumni from the late ‘60s; as a duo with David Grisman; as a guest of Peter Rowan’s; and in the all-star collective known as “Thunder Jam,” which grew into the Telluride House Band in future years. I was impressed with his soul and precision, whether a song called for a ripping solo or a single elegant note that seems to drift away with the wind.

I’d go on to see Rice dozens of times the next 15 years, always at Telluride or RockyGrass and often alongside contemporaries like Sam Bush, Béla Fleck, Grisman or Rowan. I never saw Rice sing, as his voice – considered by many to be the best in bluegrass – was stolen by muscle tension dysphonia back in 1994. Then, in 2013, a severe case of tennis elbow forced him to retire from guitar-playing.

What he leaves behind are hundreds of recordings with such groundbreaking groups as the original J.D. Crowe & the New South (which featured not only a young Rice, but future bluegrass luminaries Ricky Skaggs and Jerry Douglas), the original David Grisman Quintet, the Tony Rice Unit and the Peter Rowan/Tony Rice Quartet.

Rice’s death also was one final bird that 2020 flipped at music fans. Let’s face it – the musicians who entertained us in our youth are old men and women these days. Dozens of them were going to die of the usual causes like heart attacks, strokes and cancer. But COVID-19 hurried dozens more along.

Locally, we lost Cy Scarborough, the 93-year-old founder of the Bar D Wranglers, on May 18, and 83-year-old Country Music Hall of Famer Charlie Daniels, a part-time La Plata Canyon resident, on July 6. The two were close friends.

Nationally, country music lost legends like Kenny Rogers, Mac Davis, Joe Diffie and Charley Pride, the latter from COVID just weeks after performing at the 2020 Country Music Association awards show in Nashville, where he also received a Lifetime Achievement Award. The awards ceremony was reportedly a mostly maskless affair with limited social distancing. Whether or not Pride was exposed at the event or traveling to and from it is unknown. However, the CMAs could have opted for a virtual event like the Grammys or Oscars … but hey … “muh freedumbs.”

On the outskirts of country in folk and alt-country territory, 2020 saw David Olney die onstage mid-song while gripping his guitar and hanging onto one last note; Austin outlaws Jerry Jeff Walker and Billy Joe Shaver die within a week of each other; and the legendary John Prine battle COVID-19 in the waning days of March. Prine left us with one final tune, the wistful “I Remember Everything.”

One of rock’s founding fathers, Little Richard, died of bone cancer in May at the age of 87. Crossover acts like Johnny Nash (“I Can See Clearly Now”) and Bill Withers (“Lean on Me”) both passed. Nash was among the first non-Jamaicans to record reggae music. That genre also lost one of its last elder statesmen, Toots Hibbert, to COVID-19 on Sept. 12, just weeks after the triumphant release of his much-heralded comeback album, “Got to be Tough.”

Many of us kissed our youth goodbye when 1980s hard rock heroes Eddie Van Halen and Neil Peart lost their battles to cancer. Both men were in their sixties. I consider myself lucky to have seen Van Halen on the Monsters of Rock Tour at Mile High Stadium in 1988; and Rush at Big Mac during the Power Windows Tour. Other rock visionaries to pass on included the Spencer Davis Group’s namesake, Spencer Davis; Wayne Fontana & the Mindbenders’ lead singer, Wayne Fontana; Molly Hatchet founding lead guitarist, Steve Holland; original Fleetwood Mac singer/guitarist Peter Green; and, a little more than a week ago, Mountain lead singer and guitarist Leslie West.

Also lost were: the banjo player who wrote “Dueling Banjos” from the early ’70s epic, “Deliverance,” Eric Weissberg; “Barefootin’” songwriter and New Orleans soul man Robert Parker; and pianist Henry Gray, who virtually invented Chicago blues piano in the 1950s when he backed the likes of Muddy Waters, Sonny Boy Williamson and Buddy Guy. That dude from Was (Not Was) that also sang in Lyle Lovett’s Large Band, Sweet Pea Atkinson? He died, too.

Helen Reddy stole our hearts in the 1970s as both an actress and singer. She crossed over into the mainstream with “Delta Dawn” after belting out the women’s rights anthem “I Am Woman.” Reddy was my first-ever concert, when I was just 7 years old. My step-dad had access to tickets to the Houston Pro Rodeo at the Astrodome. One night featured some dude who shook his hips named Elvis. The other, that lady who sang “Delta Dawn.” My folks were split on which one they wanted to see. I was the swing vote. I chose poorly. But I fell in love with Helen, who rewarded children of the ’70s with “Pete’s Dragon” a few years later.

Last year was a bitch for all of us. It isolated us. It infected us. It divided us. It even killed some of us. But as we worked from home in our sweats and T-shirts, sometimes unbathed for weeks on end, we got tough. We adapted. And most of us survived.

I’ll sing my visions to the sky high mountains? Email me at chris@ksut.org.