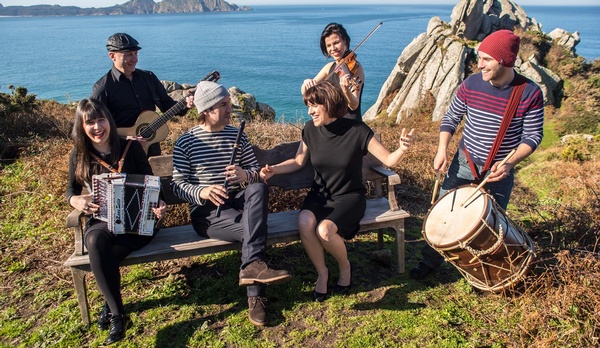 Celtic with a spicy kick comes to the Concert Hall tonight, Thurs., March 23, as Carlos Nun?ez performs with his band.

June 16, 1985, saw my old man pack up the whole family to head down to Mile High Stadium. Normally, such summer outings would be to see the Denver Bears (later the Denver Zephyrs) play minor league baseball. We’d usually stop by the Edgewater Inn for pizza (their Howdy Paisano is still my favorite pie in the world) and sausage and meatball canolis. Bears tickets were cheap. I think they had a kids’ season pass that cost $10 that gave you free admission for each home contest other than the 4th of July fireworks game and the playoffs. When the folks didn’t want to go, they’d either drop me and my buddy Shawn Nichols off at the corner of 17th and Federal, or we’d catch the bus at 26th and Kipling.

But this day was different. Mom had bought us four tickets to see the Father’s Day concert at Mile High. Bill Raines wasn’t (and isn’t) a big music fan. His one soft spot, though, was for Jimmy Buffett. Wedged in between pops by the Denver Symphony Orchestra and the King of the Parrotheads was none other than Chuck Berry.

Already 59 years old, Chuck Berry seemed like a novelty act to me. It’d been 30 years since Leonard Chess recorded “Maybellene” and some of Berry’s other huge hits. While I knew and loved songs like “Rock and Roll Music,” “Johnny B. Goode” and “Roll Over Beethoven” I was into the MTV pop and hair metal of the time and beginning a long love affair with classic rock. And while my own guitar god heroes like Jimmy Page and Keith Richards certainly considered Berry their mentor, I hadn’t yet gotten the message. Sure, my small-but-growing vinyl record collection had “Chuck Berry’s Golden Hits” ($2.25 in the bargain bin at the old used record store on Colfax!) but he seemed like a quaint deviation into my parents’ childhood.

But this old man with his pompadour, flashy suit and odd duck walk during his guitar solos moved me. He was as punk rock as the Ramones, as country as Waylon Jennings and as rock & roll as the Stones. I became a believer that day. By the end of the decade, I was searching for Muddy Waters, Howlin’ Wolf and B.B. King.

Chuck Berry died Saturday at age 90. And although his classic heyday lasted just a decade from 1955-64, he certainly perfected rock & roll. Calling him the inventor of rock is inaccurate, as Fats Domino, Sister Rosetta Tharpe, Jimmy Preston and Ike Turner all predated him. But the kid from St. Louis perfectly fused R&B, blues and country into something new and original. He didn’t sing the sappy ballads that the boy from Tupelo did, especially in the years after Elvis left Sun Records for RCA Victor. He was pure, unhinged energy. His music spoke to the rebellious teens of the late ’50s, the same ones who flocked to James Dean movies.

It was fitting that I heard the news of Berry’s passing Saturday within an hour of my old man arriving at my house for a few days of fishing and camping on the San Juan River. Last month, we said goodbye to Billy Raines, Bill’s son and my brother, who died at age 32. Billy’s first concert was that Buffett/Berry show, just seven months after he was born. The trip to the San Juan served as a way for the Raines/Aaland clan to continue its circle after the recent deaths of Mom, Billy and my baby Gus within the last five or six years … And for Otto to learn fly fishing from the master who taught me. Many of our old hunting and fishing buddies have died, but it’s up to Bill and me to pass the torch to the next generation. After seeing Otto roll cast for two hours straight while wading hip deep into the Holy Waters behind the old Duranglers store on the San Juan and set the hook into a 16-inch rainbow that took him on an angry, aerial run, I know that torch is in good hands.

One person who was certainly influenced by Chuck Berry is bluesrock master Coco Montoya, who plays at Crash Music in the historic Aztec Theatre at 7:30 p.m. Friday, the same day his new album “Hard Truth” hits the stores. Originally a drummer, he was taught to play “icy hot” guitar licks by Albert Collins in the mid-1970s and later was a member of John Mayall’s Bluesbreakers before launching a solo career in 1993.

Carlos Nuñez brings his band to the Community Concert Hall at 7:30 p.m. tonight (Thurs., May 23) to play Celtic music with a medieval, Spanish twist. Nuñez is the undisputed master of Galicia’s signature musical instrument, the gaita, or Galician bagpipes. He is a major force behind the reconstruction of the Galician musical tradition.

Tiffany Christopher brings her one-woman band to El Rancho from 5-8 p.m. Friday. Her third album, “Tremendous Heart,” is a polished version of her live arrangements that uses loop techniques and a variety of instruments and effects. Guests on the record include Kenny Passarelli (longtime Elton John bassist) and Bridget Law (fiddle player for Elephant Revival).

The historic Strater Hotel presents the fifth annual Durango Ragtime & Early Jazz Festival Friday through Sunday. For three days, the Strater will be filled with the sounds of ragtime and early jazz music from the likes of Morten Gunnar Larsen of Norway and the Holland/Coots Jazz Quintet featuring members of the Titan Hot Seven.

Still jonesing for one more powder weekend with a musical twist? The Ride Festival brings North Carolina jam band Big Something to the Sheridan Opera House in Telluride Friday and Saturday.

Earlybird tickets remain on sale through March 31 for the 12th annual Pagosa Folk’n Bluegrass Festival (June 9-11 on Reservoir Hill) and the lineup is now complete. The O’Connor Band featuring Mark O’Connor (fresh off a Grammy for Best Bluegrass Album) and Loudon Wainwright III headline the three-day affair, with the undercard including Dustbowl Revival, Lil’ Smokies and longtime festival favorites Phoebe Hunt (formerly of the Belleview Outfit) and Luke Bulla.

He could play the guitar just like ringing a bell? Email me at chrisa@gobrainstorm.net.