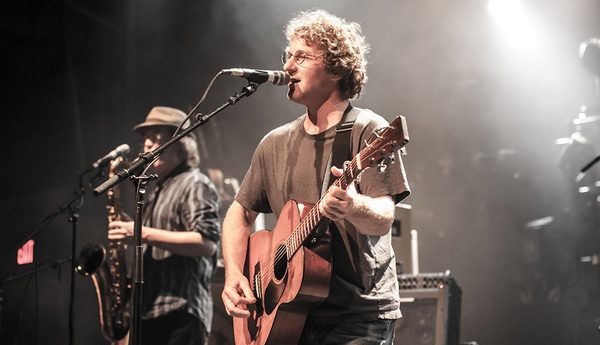 Once upon a time, landscaping was my life. From three years in the mid-1980s working on the grounds crew at Applewood Golf Club in Wheat Ridge to a summer on Tony Fuchs’ crew in the Denver area to a few years mowing dozens of suburban lawns per week in the old neighborhood, it kept me tanned, fit and in beer and concert money in my late teens through early twenties.

While mowing and weed-whacking made up the bulk of my career, I was fortunate to do bigger landscaping projects, particularly with Fuchs (get your mind out of the gutter ... he chose to pronounce it “Fox”). We levelled ground, put in sprinkler systems, laid sod, planted trees, built garden boxes and planters, repaired equipment and much more.

So when my wife, Shelly, grabbed rakes and shovels and started clearing out mulch in the xeriscaped area in front of our house, I knew something was afoot. She’d found out that a friend of a friend was wanting to clear out tons of river rock that he was using to stabilize the slope outside of his house up near Lemon Reservoir. She pounced on the opportunity to procure free rock like a cougar jumping on a wounded deer.

We packed the whole fan-damnily into the Tundra for four trips to fill the bed with rock. This was hand-to-hand combat. Shovels and rakes were next to useless. Instead, we used our hands to load, unload and place a couple of tons. Gloves certainly reduced the amount of pinched pinkies and dented digits, but they didn’t eliminate them. But by Saturday evening, we’d laid nearly 500 square feet.

Next came the planters. We have three whiskey half-barrels in front of our house, and a handful of stone-lined garden areas. The barrels needed filling, first with dirt and compost, then with a mix of annuals and perennials. Finally, ground cover needed to be transplanted into select areas.

By Sunday night, I was sitting in my old, blue ice-fishing chair, drinking an ice-cold Rue B. Soho grapefruit lager and admiring our handiwork. No trips to the emergency room. No major fights between Otto and Rosie. Just a nice-looking rock garden and some pretty flowers.

It’s a never-ending chore, though. Suckers and volunteers have taken over a rocked garden area in the back yard that begs for flat rock. Five aspens have died and need to be taken down, bucked and split for next winter. A six-foot-high fence needs to be erected to contain my spirited German shorthair, Jessie. Grass needs to be mowed and dog poop scooped. But Sunday’s suds sure tasted sweet.

The Dolores River Festival – one of the funkiest little festers in the Southwest – takes place in Dolores’ Joe Rowell Park this Saturday from 10 a.m. until dark. The main stage hosts West Coast funk/reggae/Afrobeat band Diggin Dirt, space cowboy Garrett T. Capps and local acts Afrobeatniks and Elder Grown, while others perform on the side stage and in the crowd throughout the day. Music is just half the fun. There’s also a variety of river activities, family fun, beer drinking, camping and more. Unlike other festivals, this one’s dog friendly, assuming Fido is leashed and behaves himself.

Railroad Earth frontman Todd Sheaffer brings his solo show to Animas City Theatre next Wednesday night (doors open at 7). He’s been Railroad Earth’s principal songwriter, singer and guitarist since 2001, as the group ascended into the rarified air atop contemporary newgrass, alongside the likes of Yonder Mountain String Band, Infamous Stringdusters and Greensky Bluegrass.

Early appearances at Telluride and Grey Fox introduced them to tens of thousands of fans, and Sheaffer and company expanded on their base by playing intimate, smaller venue shows in places like Durango. Sheaffer is more than just a Railroad Earther. Long before that band even formed, he was part of From Good Homes, an East Coast trio that released a handful of acclaimed albums for RCA back in the 1990s. When he wasn’t touring and recording with FGH, Sheaffer undertook solo tours of Europe.

One of the most coveted tickets around is one to the Durango Blues Train, the first of which takes place Friday and Saturday. Six blues acts perform aboard the D&SNGRR on vintage coaches, while passengers dance and drink their way from one coach to another. The first two, along with the Aug. 16-17 trains, sold out months ago. The lucky few get to see Brandon Santini, Ally Venable Band, Brody Buster, Smokestack Relics, A.J. Gaither OMB and Alex Paul perform. Patrons will sip suds and ciders from Ska, Telluride and Big B’s Hard Cider, along with wine and non-alcoholic drinks. Even though it sold out, the folks at Durango Blues Train have teamed up with Lyte to give attendees a safe way to get official tickets after tickets have sold out. This fan-to-fan exchange eliminates the worries of purchasing a fraudulent ticket from a scalper, Craigslist or third party like Stub Hub. Simply visit Durango Blues Train’s website and sign up for the ticket exchange.

Elsewhere: Red Eyed Djinn jams at tonight’s (Thurs., May 30) Ska-B-Q at the World Headquarters in Bodo Park; Tim Sullivan brings country to the Diamond Belle Saloon at 5:30 p.m. tonight; Black Velvet has a busy week, with the duo playing the Dalton Ranch patio at 6 p.m. tonight and the Animas River Beer Garden in the Doubletree Hotel at 5 p.m. Saturday, while the trio returns to the Balcony at 4 p.m. Sunday; Plursday at the Starlight features DJ Zirk from 9 ‘til close tonight; The Cortez country group Bent Fender twangs out at Serious Texas BBQ South at 5 p.m. Friday; The Crags rock the Starlight from 6-9 p.m. Friday, followed by DJ Hakan from 9 ‘til close; and DJ Affex spins at the Starlight from 9 ‘til close Saturday.

The Animas City Theatre will screen the award-winning documentary “Amazing Grace” starting Friday and running through next Thursday. The film documents the live recording of Aretha Franklin’s album of the same name at the New Temple Missionary Baptist Church in Watts in 1972. Critics call it the greatest movie about gospel music ever made. Not only does it document Aretha’s skills, but it’s a transcendent, spine-tingling, uplifting and utterly joyous experience.

When will I see the sunshine again? Email me at chrisa@gobrain storm.net.