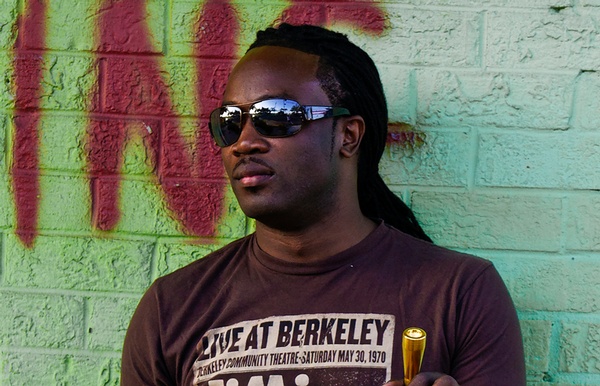 Galactic's Shamarr Allen performs at the Animas City Theatre with his group, the Underdawgs, tonight (Thurs., Aug. 22) at 8:15 p.m.

You know summer is drawing to a close when Lawn Chair Kings make their final stop at The Balcony (6-10 p.m. Friday). It’s one last chance to sit in the company of Kings while sipping Mexican Loggers and enjoying a summer breeze. If you’re lucky, you can watch tourists confounded by the one-way 500 block of Main.

What makes Friday extra special is that drummer Patrick Dressen will have 63 birthday candles to blow out. I’ve known Sir Patrick the longest of any of my local musician friends, having first seen him with the Marmot Mudflaps in the early ’90s. My love for that high-and-lonesome sound is all his fault. Through the years, he’s played guitar, mandolin and drums with a host of local groups, including the Badly Bent, Heart & Soul and others.

The last time I saw LCK was at the Durango Meltdown, when they played as a five-piece bluegrass outfit. The Kings dusted off one from Dressen’s days in the Rusty Razor Band called “Can’t Go Home Again.” I first fell in love with it when the “Durangatwangs” compilation was released on cassette in 1989. The Rusty Razor Band featured Dressen along with Jack Tallmadge, Kyle Bauman and Larry Boyce. A few years later, he reprised the song with Heart & Soul on their “Kindred Spirits” CD. You can imagine my astonishment when bassist Dan Leek introduced the number last spring at Meltdown.

If you find “Durangatwangs” at a thrift store, buy it ... it’s local music history. Many of the folks on the tape are still around, including Kirk James, Peter Neds, Gary Watkins and soundman Doug Eagle.

Beer drinkers unite! The San Juan Brewfest takes place Saturday in Buckley Park, with VIPs admitted at noon and general admission at 1 p.m. This event has sold out the past five years, so it’s unlikely any tickets will be available at the gate. More than 50 breweries will participate, including all five Durango brewers (Animas, Carver’s, Chainless, Ska and Steamworks), most of your regional favorites (Bottom Shelf, Dolores River, Fenceline, Main Street, Mancos, Pagosa, Riff Raff and Telluride) and many others. And know that you’ll be drinking for a cause, with proceeds (nearly $40,000) going to United Way of Southwest Colorado.

Let there be music, sweet music! The event’s headliner is Ron Artis II & the Truth. Artis plays an aggressive, funky version of soul and blues that will surely get the crowd jumping. Artis & company will perform tunes from their latest album, “Love is Love,” which drops Sept. 9. Opening the festivities is Spidercat, a new blues outfit from northern Colorado. You’re probably familiar with some of the trio’s members. Mike Finnders is an award-winning songwriter and longtime frontman of bluegrass/Americana outfit FY5 (formerly Finnders & Youngberg). He trades his trusty acoustic guitar for a Fender Stratocaster in Spidercat. Bassist Eric Thorin is one of Colorado’s most versatile musicians, having slapped the upright  bass for Open Road, Mollie O’Brien, the Matt Flinner Trio and Bonnie Paine, among others. Blues/jazz drummer Larry Bridges completes the trio.

You’ll be tanked by the end of the afternoon, so arrange for a designated driver or safe transportation. Johnny Law will be circling area streets and highways like sharks, and justifiably so. The City of Durango has partnered with Ride Responsible to offer free Durango Transit service Saturday. All routes will be free throughout the day, operating on normal schedules from 7 a.m. - 8:30 p.m.

More rules: leave your children and pets at home. More than 2,500 adults cram into the park for this event; Junior and Fido will just get in the way. And try to get along. Beerfest might not be the best venue to make a social statement, as patrons represent all sides of the political spectrum. Drunks are known to get angry and throw down on occasion. Let’s just drink in peace, if only for a few hours.

The Big Easy comes to Durango at 8:15 p.m. tonight (Thurs., Aug. 22) when Galactic’s Shamarr Allen performs at the Animas City Theatre with his group, the Underdawgs. The trumpeter steps into the forefront to handle lead vocals in his funk/rock/hip-hop outfit, which has several albums under their belts, including the latest, “True Orleans.” No title for a record could be more apt, as Allen was born and raised in the Lower Ninth Ward. He has absorbed all of the musical styles of his hometown, including jazz, blues, funk, hip-hop, rock and even country.

The iAM music festival continues from 5 – 11 p.m. this Sat., Aug. 24 at the 11th Street Station with Jerusafunk, a Phoenix-based psychedelic Klezmer funk band that likely has to be seen to be believed. Opening acts include Loki Moon and PJ & the Swappers. Admission is $10 and goes to benefit iAM’s local musical educational mission.

It’s safe to say the Stillhouse Junkies have outgrown their local band tag. Their latest national tour kicks off at 9:30 p.m. Friday at the Animas City Theatre with their buddies Six Dollar String Band opening. After the show, Stillhouse embarks on a three-week cross-country tour.

The 4 Corners Comedy Festival runs today through Sunday at the Henry Strater Theatre with performances, workshops, parties and more. Comics from all Four Corners states will be represented, including headliner Jay Whitecotton, Virginia Gonzales, Jason Thornton, Curt Fletcher and Jonathan Gregory, among others. Tickets and details are available at henrystrater theatre.com.

Finally, tonight’s Ska-B-Q takes attendees back to the brewery’s roots as Warsaw Poland Bros. play from 5-7 p.m. Expect plenty of vintage ska, reggae, punk and Celtic from the Flagstaff-based band.

He spent his days in the Red Mesa sun? Email me at chrisa@gobrain storm.net