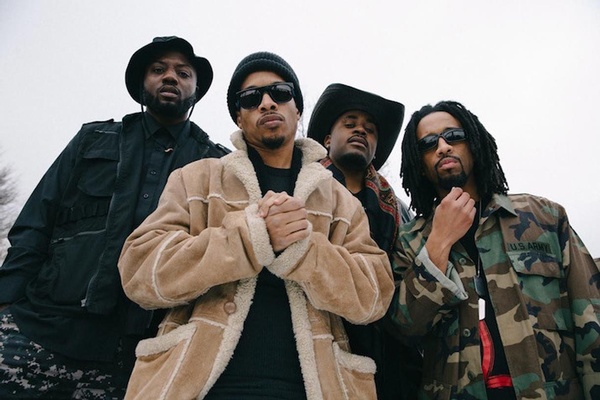 Oh, to bid adieu to 2016 – the year that cost us Bowie, Prince, Hag, Glenn Frey, Muhammad Ali, John Glenn, Leonard Cohen, Guy Clark, Leon Russell and Sharon Jones, as well as national pride and common sense. What does the future hold in store? Who knows for sure.

It wasn’t all bad. The Broncos somehow rolled to their third Super Bowl. The Cubbies exorcised a jinx that dated back to the waning days of Theodore Roosevelt’s second term in office and in classic, nail-biting style, no less. In between, I saw my boy Otto accomplish something I never did as an athlete ... win a championship. The fourth grade Little Demons avenged their last-second loss a year ago to Farmington in the YAFL Super Bowl. A papa’s pride for his middle linebacker is eternal.

Say goodbye to ’16 in style at the Animas City Theatre with the Nappy Roots (doors at 8, music from 9 ’til 2 a.m.). The alternative southern rap quartet formed in 1994 in Bowling Green, Ky., released their debut album, “Country Fried Cess” in 1998 and haven’t looked back. In 2002, they released the best-selling hip hop album of the year, “Watermelon, Chicken & Gritz,” garnering a pair of Grammy nominations. Their latest record, on their own label formed more than a decade ago, is 2015’s “40Akerz Project.”

Silverton’s Grand Imperial Hotel hosts a New Year’s Eve gala with dinner from 5-8 and live music from Farmington Hill from 9 ’til the wee hours. Highlighting the event is the raffle of a coveted, custom Grand Imperial/Venture Paragon snowboard.

Back in D-town, Hello Dollface hosts an “Interstellar NYE” at the Strater Hotel. The all-ages future-themed show is open to all cyborgs, extraterrestrials and spirit animals. Doors open at 9 p.m.

The next day, something new rolls down the rails: a New Year’s Brunch Train to the Cascade Wye. Departing at 9:45 a.m. and returning at 2:45 p.m., first class cars will include the Durango-Silverton Cure, a special on-board brunch catered by the Strater with all the fixins to ring in the New Year; complimentary mimosa; and live music onboard and at Cascade.

Jim Belcher, bassist for Sky Pilot and host of KSUT’s Strange Brew, gave us his Top 10 albums of 2016 this week. As always, his jammy, eclectic tastes shine through.

1. David Bowie, “Blackstar.” I was thrilled to see that Bowie dropped this album on his 69th birthday, and then crushed when I heard of his passing. The album itself is a deeply personal meditation on death and also a courageous commitment to his art, as he knew he was terminally ill during the recording. Plus, it sounds awesome, venturing into the outer realms of proggy jazz, with electronic elements seasoned in. It offers new revelations with every listen.

2. Phish, “Big Boat.” I admit, this album had to grow on me, as I had first been exposed to a good percentage of the tunes in a live setting and got to know them in a jammier way instead of the succinct studio versions. The album features some very heartfelt songs from Trey Anastasio, including “Miss You,” about the continuing impact of the death of his sister, and “Tide Turns,” which harkens back to Trey’s time in rehab and his continued support of those going through the process. Biggest surprise? Three songs from keyboardist Page McConnell.

3. Umphrey’s McGee, “Zonkey.” This prog-jam sextet has breathed new life into the musical mash-up concept, wielding a cross-genre buzz saw and seamlessly re-integrating songs as disparate as Beck’s “Loser, Radiohead’s “National Anthem” and Phil Collins’ “In the Air Tonight” into a new thing that still honors the originals.

4. Lake Street Dive, “Side Pony.” I’ve been a fan of this band since before KSUT brought them to town for a magical evening on the Smiley Building lawn back in 2014. And this release show-cases the growing mastery of their brand of modern retro soul, R&B and jazz-tinged pop, highlighted by the wonderfully catchy title track

5. Red Hot Chili Peppers, “The Getaway.” It’s a long way from the hard funk and rawness of “Uplift Mofo Party Plan” or “Freaky Styley” to the polished approach that these L.A. veterans have laid down on their 11th studio album.

6. Marcus King Band, self-titled. This kid is the Real Deal, with a voice that belies his age (20 years!) and guitar skills that rank up there with his influences, Derek Trucks, Duane Allman and Warren Haynes. I was out of town when they played the ACT right before Thanksgiving, and I’m still kicking myself. Here’s hoping they return soon.

7. Gov’t Mule, “The Tel-Star Sessions.” Speaking of Warren Haynes, this album showcases a young and hungry power trio back in 1984. Although fans have been hearing these songs for years in concert, this is the first time the studio recordings have been released, including a smokin’ cover of ZZ Top’s “Just Got Paid.” Southern Jam, raw and tasty.

8. Mudcrutch, “2.” Big props to Tom Petty for continuing this project. Besides showing his loyalty to his old Florida buddies, it’s good, hearty meat-and-potatoes stuff. On this release, Petty loosens the reins and all the band members take a turn as lead vocalist on their own songs.

9. Radiohead, “A Moon Shaped Pool.” Another thought-provoking and sonically adventurous offering from Thom Yorke and company. Definitely don headphones for this one. Studio trickery, strings, electronic glitches and oblique lyrics all combine into a heady musical stew.

10. Sting, “57th & 9th.” A welcome return to the more direct pop-rockiness of his younger days. Sting has written a set that addresses some current issues (climate change in “One Fine Day,” the many musicians who have passed away in 2016 in “50,000”) with his incisive lyrics. If you like to sing along to “Message in a Bottle” or “Roxanne,” you should find plenty to like about this one.

Look up here, I’m in heaven? Email me: chrisa@gobrainstorm.net.