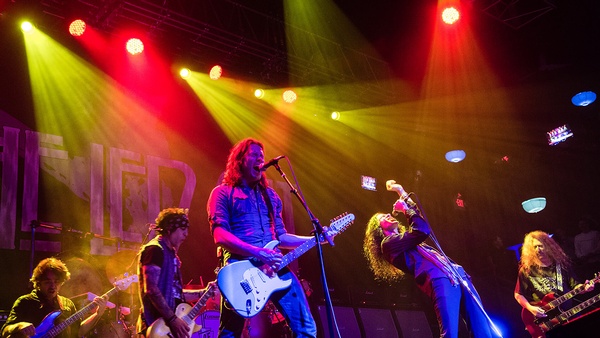 My wife, Shelly, just returned from five days in Nashville, where she attended a work conference. While she was filling her belly with BBQ and hot chicken and seeing the likes of Dan Tyminski and Vincent & Dailey at the Grand Ole Opry, I was back home juggling a moody 12-year-old boy, a rowdy 5-year-old girl and a cantankerous 6-year-old German shorthair with pre-KSUT fund drive duties. Single parenting sucks, even if for less than a week.

Fortunately, I was doing so while celebrating Sober September – which I started the
day after Ska’s 24th anniversary party and will continue until Saturday, Oct. 5, when Town Mountain returns to D-Town. Fighting hangovers and gout simply doesn’t work during insanely busy times at work and home.

Shelly returned with goodies from the road – namely, Pecan GooGoo Clusters and Moon Pies (when in Rome, right?) I’ve never been a fan of Moon Pies, but GooGoo Clusters are a personal weakness. There’s a truckstop in Atwood, Kans., that I usually stopped at en route back to Denver after pheasant hunting trips that specialized in hard-to-find, regional candies. I think it’s the only place I’ve ever seen GooGoo Clusters. I became addicted, even if once every year.

Shelly also bought a shiny silver koozie from the Opry. It’s sad that it’ll have to wait another 10 days to be broken in, once my month-long sobriety binge comes to an end. She knows my soft spots. I have an extensive collection of koozies and pint glasses, numbering in the hundreds each. The koozies are a hodgepodge of overpriced band and festival souvenirs, freebies from beer festivals and even a few deluxe garage sale scores. The glassware collection is so out-of-hand that my contractor buddy Elwin Johnston had to build a railing around my man cave that displays hundreds of these. Otto and his rambunctious friends have only managed to knock off and shatter one of them through the years, but it’s enough to make me consider putting a lip on the front of the railing to protect them from the frivolity of pre-teen boys.

I miss the man cave. Otto took it over four or five years ago, connecting his video game console to the TV. The old turntable collects dust, replaced by the omnipresent Alexa who blurts out his Top 40 flavors of the month much more often than my scratchy vinyl records from Willie Nelson and Bruce Springsteen ever get played.

With the Avalanche and Nuggets on the brink of their season openers, it’s unlikely that I’ll get to watch games in the man cave any time soon. Altitude TV, the home of the Avs and Nugs, is in a never-ending pissing match with DirecTV (which I subscribe to), Dish and Comcast.

ESPN is preparing to enter a similar battle with satellite and cable providers. I place blame on both sides. The rich get richer and could give a damn about you or me. Those of us living on the outskirts of Podunk, U.S.A., have shoddy internet and phone service to begin with, so streaming isn’t the best option – especially for luddites like me.

Perhaps I should dust off the vinyl records again. Skynyrd’s “Gold & Platinum” and Tom Petty & the Heartbreakers’ “Pack the Plantation Live” always worked on Friday nights back in the ’80s.

The Community Concert Hall pays homage to the mighty Zeppelin at 7:30 p.m. Friday, when Get the Led Out returns. Back by popular demand, GTLO captures the essence of the recorded Led Zeppelin catalog. Unlike the great quartet of Plant, Page, Jones and Bonham, GTLO features six musicians who accurately delve into Zeppelin’s studio recordings. From the bombastic and epic, to the folksy and mystical, GTLO focuses on the early years and touches deep tracks that were seldom (if ever) heard in concert. A special acoustic set features the likes of “Tangerine” and “The Battle of Evermore.”

Random Ra brings eclectic electronica to the Animas City Theatre at 9 p.m. Friday. Rab’s songs are at once beautiful and melodic, and anthemic and timeless. He emerged from his own distinct corner of the West Coast electronic music scene by drawing from diverse influences that include trip-hop, classical, Arabic and his own bass-driven compositions. Rab also pulls from a unique personal background that includes fronting a heavy metal band, touring as a classical trumpet player, band, scratching as a DJ for a jazz fusion project and singing in a Mexican rock band.

Farmington Hill plays tonight’s Ska-B-Q from 5-7 p.m. at the World Headquarters in Bodo Park. FH shows are all-too-infrequent as of late, with most occurring in the Nord’s new climes over in Montezuma County. I caught them in early July over at Fenceline Cidery in Mancos. The rhythm section of Jim Belcher and David Sachs’ bass and drums, respectively, in the Ben Gibson Band adds a sophistication to the group’s sound.

Playing the gritty, ballsy, twangy rock forged by Bubba Iudice, Kelly Rogers and that golden rock god himself, Erik Nordstrom, seems liberating for Belcher and Sachs. Those two hours in Mancos might’ve been the best two hours of music I saw all summer. Lightning in a bottle? Methinks not. There’s a cool chemistry here from five music veterans.

Nordstrom also hosts the latest installment of Erik & Friends from 5-7 p.m. at Mancos Brewing. This time around, he’s joined by Chris Bouton, the guitarist/singer/songwriter from the Dolores-based bluegrass outfit, Last Nickel. “His music is inspired by the many musicians he has crossed paths with over the years and by his roots in eastern Kentucky where he started playing music as a teenager,” Nordstrom said. “I admire his unique string attack, thoughtful originals and well-chosen covers.”

The San Juan Symphony kicks off its 34th season with “Absolute Refinement” at 7:30 p.m. Saturday in the Community Concert Hall.

“Mozart and Mendelssohn represent the ultimate in classical beauty and craftsmanship,” SJS maestro Thomas Heuser noted. “In distilling the essence of their musical styles, Prokofiev creates a jaunty and carefree symphony that pairs perfectly with its refined European models.” All three composers are featured in this weekend’s debut (a second performance takes place at 3 p.m. Sunday at Henderson Hall on the San Juan College campus in Farmington). Heuser will offer a pre-concert talk an hour before each show.

My beer holder’s getting bigger every day? Email me at chrisa@gobrainstorm.net