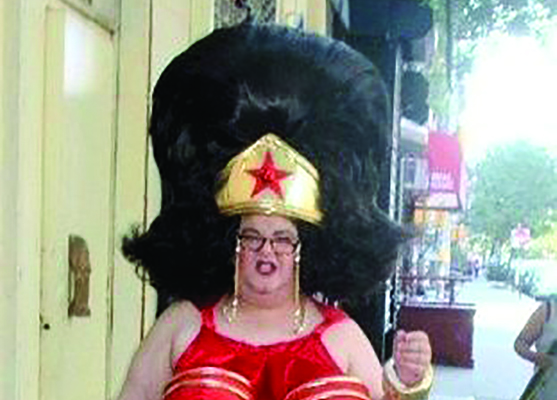 There’s a few rules to keep in mind. You’re forgiven for partying, but not for being an asshole. If you’re going to drink, make sure you have a sober driver or call a taxi. DUI arrests are frequent this week. Don’t start fights, even if you lost the Freestyle Rap Off or Cornhole Tournament. And dress like it’s wintertime. The next round of storms is supposed to hit Saturday and end Tuesday. Nobody wants to freeze to death in a snow bank. Your Wonder Woman outfit is nicely accessorized by a coat, stocking cap and mittens ... maybe even a functional scarf. Trust me. I’ve made the walk from 8th to Main to see the parade, trudging through snow and sliding on ice. It might be wise to leave your Birkenstocks at home.

But nobody likes a preacher, so let’s get down and boogie! Snowdown is our own Mardi Gras. We get to dress like freaks, drink like soldiers on a week-long R&R and generally let life’s ups and downs circle down the toilet. At the end, it’s Super Bowl Sunday and we all get to watch Tom Brady dismantle the other team that doesn’t even belong in the big game.

If I were a Snowdown virgin, I’d circle this baker’s dozen of events in my program:

2. Hot Wing Eating Contest, today, 4 p.m., Cuckoo’s. These ain’t yo’ mama’s wings. Cuckoo’s whips up a special batch of extremely hot wings, and contestants see just how many of these hot mamas they can stuff their faces with. These are hot enough to induce vomit. Cost is $8 per entrant, limited to the first 20.

3. Capt’n Marvel Oyster Slurping, today, 4 p.m., Hwy 3 Roadhouse. Same concept as above, just a fancier appetizer. Put 60 seconds on the clock and slurp to your heart’s content! Cost is $20, limited to the first 10 men and first 10 women.

4. Magical Mystery Musical Tour Finals, tonight (Thurs., Jan. 31), 6 p.m. ‘til late, Irish Embassy Pub. Any chance to see musical geeks like Ted Holteen, Dan Groth, Bryant Liggett and Erik Nordstrom test their trivial IQ is worth it. The hosts, John Hise, Michael Jordan and the esteemed Brothers Garland, keep it fun for the crowd, too, offering up dozens of great prizes for the audience when the contestants bomb. I’ve participated in this six or seven times and it’s a hoot.

5. Snowdown Follies, tonight, Friday & Saturday nights, Durango Arts Center & Henry Strater Theatre. There’s an 8 p.m. gala tonight at the Hank, plus two shows per night at each venue on Friday and Saturday. That’s nine total showings. Don’t worry about waiting in line for tickets ... that ship sailed weeks ago. However, miracles do happen, if you’re either flirty and attractive, or willing to pay scalper’s prices. The Follies, now in their 41th year, are the irreverent, beating heart of Snowdown. It’s always the beer-drenched, dress-stained, lowbrow highlight to the week, with some of Durango’s best and brightest doing amazingly raunchy routines. P and C are definitely two letters missing from the Follies alphabet. Fun fact: a dear friend of mine who has served as Follies MC in the past refers to the event as the Cokedown Follies.

6. Waiter/Waitress Race, Friday, 2 p.m., Steamworks. What better way to get prepped for the parade than getting sauced on microbrew while watching your favorite servers from local restaurants and bars compete in a messy obstacle course that incorporates waiting skills with death-defying athletic prowess?

10. Snowdown Chili-Cook-Off and Bloody Mary Contest, Saturday, noon-2 p.m., La Plata Fairgrounds Exhibit Hall. You think you cook a mean green chile or blend the tastiest bloody in town? Then put your money where your mouth is. Judging begins at 10:30 a.m., with public tasting samples on sale beginning at noon. Beer and soft drinks are also available to soothe your scalded lips. Proceeds benefit Snowdown itself.

11. Outlaw Josie Pete’s Golf Tournament, Saturday, noon, 24 downtown bars & restaurants. This one’s sold out, but it’s a helluva good time to people-watch if you happen to be at one of the bars. Teams of four dress up as superheroes and play mini golf. Each bar is a different hole. Putt and move on, but only after imbibing on the house specialty. If you’re lucky, you might even get to play a hole. I usually plant myself at Durango Craft Spirits and let Chuckles pour me a stiff one (or three).

12. Outhouse Stuffing, Saturday, 1 p.m., Gazpacho. See how many of your flexible friends you can stuff into an outhouse in two minutes! Don’t worry – the port-a-potties have been cleaned in advance.

13. Snowdown Fireworks, Saturday, 6 p.m. The Friday Firework is a spoof. The Saturday show is for reals. Given that the drought-riddled summers deprive us of the patriotic fireworks display each year, this might be your only chance to see the skies light up like the northern lights on acid ... Especially if you dose around 4 p.m. that afternoon!

The ice and snow is sneakin’ through my windows? Email me at chrisa@gobrainstorm.net.