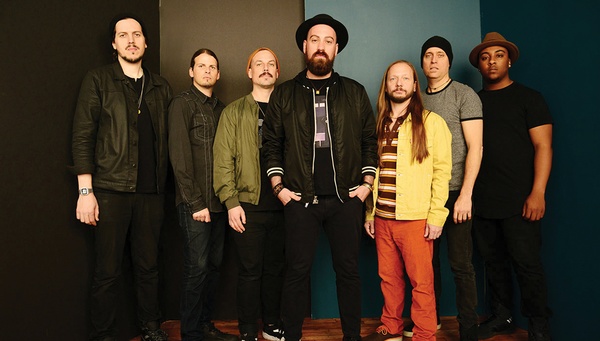 The Motet bring it's "Speed of Light" tour to KSUT's 16th annual Party in the Park from 5-9 p.m. this Saturday.

"There’s never any good live music in Durango.” This statement was, is, and shall always be bunk. Take this weekend, for example. There’s so much to do that promoters of the two biggest events are teaming up to offer free admission to their festivals to ticketholders from the other, allowing attendees to bounce back and forth without being charged twice.

KSUT’s 16th annual Party in the Park takes place from 5-9 p.m. Saturday in Buckley Park, with the Motet bringing it’s “Speed of Light” tour to Durango. The Afrobeatniks kick things off at 5:45, with the Motet taking the stage at around 7:30. The Motet dropped its ninth album, “Death or Devotion,” in January. It rides the same funky wave they’ve been on for the last five years or so. Through the years, their sound has morphed from jam band to world drumming to avant-garde jazz to a soulful blend of funk, disco and R&B. The Afrobeatniks will play songs off their excellent debut album, “Wontanara.” As always, KSUT and its partner, Bank of the San Juans, will serve Ska beer, wines from Wagon Wheel Liquors, cocktails from Durango Craft Spirits and the station’s own signature sangria. Food vendors will also be on site. The Party in the Park isn’t one of those free Buckley affairs, but rather a ticketed one to raise money for public radio in the Four Corners. After all, the bands, sound and lights crew, city, and others don’t give away their services. Advance tickets are available at www.ksut.org, but you can also pay at the gate.

Up on Durango Mesa (formerly known as Ewing Mesa), the Durango Bluegrass Meltdown presents its fifth annual Melt-down on the Mesa. This event shines the spotlight on local bands, with six of them playing from 1-9 p.m. It all wraps up with two full sets by Liver Down the River from 6-9, plus earlier ones by Six Dollar String Band, Crooked Measures, Smelter Mountain Boys, Woodland Remedy and the Badly Bent. There’s also free camping and all-night picking circles.

Sadly, my duties at KSUT’s Party in the Park mean I’ll miss Meltdown on the Mesa for the first time ever. I think I even made all of the event’s precursors, the Meltdown fall parties on the loading dock of the old Durango Brewing Co. If you’re planning on attending one event or the other, you don’t have to miss out. KSUT will admit Meltdown on the Mesa attendees for free with their Meltdown wristband. Likewise, Meltdown on the Mesa is doing the same for people who present their KSUT Party in the Park ticket. It’s a nice compromise for two entities who keep music alive in the Four Corners, giving music fans the option of attending both events.

Instead, the sale of pints benefits Mancos Valley Resources and the Pay It Forward Fund.

The Community Concert Hall at Fort Lewis College kicks off its 2019-20 season with Trace Bundy: Acoustic Ninja at 7:30 p.m. Saturday. Bundy is an internationally acclaimed guitar virtuoso who uses harmonics, looping, multiple capos and a unique stage presence to deliver an unforgettable live concert experience. His career has taken him across the world, with sold-out concerts

in 28 countries – from high-tech performance halls in South Korea and Italy to remote villages in Zimbabwe and Guatemala.

The Animas City Theatre hosts the third and final preliminary rounds of the Battle of the Bands at 8 p.m. Saturday. This time around, Ethnic De Generation, the Shawn Arrington Band, Versa Vice and the Zion Spencer Band will compete for the final slot in the Sept. 21 finale. A grand prize of $1,000 is on the line next month, so stakes are high.

Tonight’s Ska-B-Q (Thurs., Aug. 15) brings the Cheyenne Skye Duet to the World Headquarters at 5 p.m. Skye is a singer who draws inspiration from Patsy Cline, Nina Simone and Janis “Pruned for the Picking,” was released in 2018 and she’s been touring nonstop ever since. Percussionist Brian Coe accompanies her in the duet.

The Town of Silverton has hosted a free concert series on the third Friday of each month through the summer. This week, Whitewater Ramble plays high-octane Rocky Mountain dance-grass on the Mike Geryak Stage in Columbine Park. It all starts with a bike ride from Pedal the Peaks to Columbine at 5 p.m., followed by music at 6. Scott Craig & friends open the concert. Ska beers and wine from Mountain View Winery will be sold, along with grub from Eat a Bite Food Truck.

Kirk James has a busy weekend, as always. On Friday and Saturday, he’ll pick solo, acoustic blues on the long sold-out Durango Blues Train. If you were shut out on tickets, you can still catch Kirk and his band from noon ‘til 3 Sunday at the Wines of the San Juan car show in Blanco, N.M.

Elsewhere: The Badly Bent brings the high and lonesome to Durango Craft Spirits at 7 p.m. Friday; Robby Overfield returns to The Office at 7 p.m. Friday; and the Blue Moon Ramblers hold court at the Diamond Belle Saloon at 6 p.m. Sunday.

Ay carumba! It’s finally the time of year when the scent of roasting green chiles will waft across the South Side and Rio Grande Land. Gazpacho hosts their annual green chile roast and anniversary party on Friday and Saturday, while supplies last. Forty-and 25-pound bags are available, cash (or check) on the barrelhead. The restaurant gets into the spirit by serving the freshest green chile cheeseburgers and rellenos of the year and margarita and beer specials to cool the heat.

Peter Piper picked a peck? Email me at chrisa@gobrainstorm.net