The bottom of the barrel
After 14 years, 'Top Shelf' hangs up the pint glass 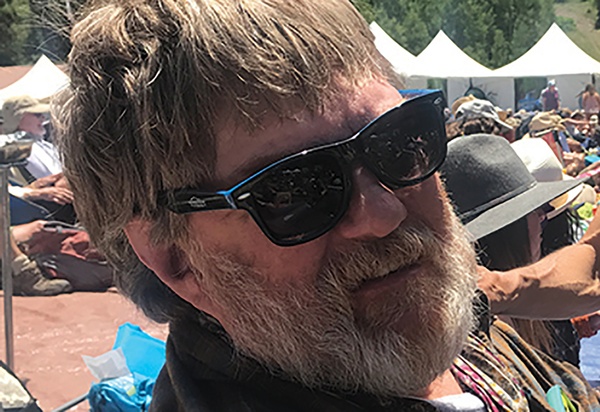 Chris Aaland in his natural habitat during the Telluride Bluegrass Festival in 2018.

We’ve reached the bottom of the barrel. A little more than two years ago, after BREW Pub & Kitchen shuttered its doors, a few of us helped owners Erik and Lainie Maxson clean out their restaurant. Uncle Steve and I showed up with every growler we could get our hands on to fill with as much of Erik’s last beers as possible. For me, that meant plenty of Woody, a doppelbock brewed for a longtime customer who had died while snowshoeing the previous winter.

Like all good malty beers, Woody had notes of caramel and toffee … sweet and salty, just like the man it was named after. The last time I sipped on a Woody was during March Madness this past spring at Erik and Lainie’s house. After two years of being trapped in a can, Woody’s character changed. When I popped the top, the first few sips brought back happy memories. But by the time I was halfway done with the 16-oz. can, it dawned on me that this wasn’t the same beer I’d loved two years ago. Woody’s time had come and gone.

And so has the time for “Top Shelf.” I’ve been writing the Telegraph’s music and nightlife column ever since the departure of Lindsay Nelson in December 2007. She followed in the footsteps of Mike Sheehan and Ted Holteen.

Call it writer’s block. Blame the pandemic and the lockdown, if you must. I just don’t have the passion for it anymore. This spring, a friend told me my column about the inaugural Tico Time festival sucked. She said my writing didn’t have the edge and humor that it once had. At first, I was hurt. Then I was pissed off. Finally, I realized she was right.

I remember the late autumn day that Will Sands, one of the Telegraph’s founders, asked me to meet him downtown – that he had a question for me. “How’d you like to write the music column?” he asked. I could hardly contain myself.

I spent the next few days pondering a name. “Bottom of the Barrel” was my first choice, referring to the sad last glass of beer that foams and sputters out of a tapped keg. It was also a self-deprecating jab at my own taste in music and popular culture. Missy Votel immediately shot that one down. I quickly countered with “Top Shelf,” a reference to both drinking and our mutual favorite sport of hockey. She loved the name.

Through the years, The Shelf shined a spotlight on the local and regional music scene, from small bars to 10,000-person festivals. Occasionally, I’d expand my boundaries beyond the San Juans and tell Hunter-esque tales of my travels. Drag karaoke at an Albuquerque motel after a Metallica concert; slipping and sliding in an oil slick in a Denver parking lot after a Dead show; drunkenly stumbling around

For 14 years, I had the pleasure of waxing about all the annual festival highlights in the region – Telluride’s big four music events (Bluegrass, The Ride, Jazz, Blues & Brews), both festers on Reservoir Hill, RockyGrass at Planet Bluegrass, the Durango Bluegrass Meltdown and more. Often writing about five or six local events each week, I can safely estimate I helped spread the word on over 3,000 live music happenings in our neck of the woods … at least before COVID-19 reared its ugly head.

I had the chance to interview artists like Lucinda Williams, Patterson Hood of Drive-By Truckers, Chan Kinchla of Blues Traveler, Ray Benson of Asleep at the Wheel and dozens more. But my favorite folks to query were local musicians like Erik Nordstrom, Gary Cook, Fred Kozak, Caitlin Cannon, Cody Tinnin and Brendan Shafer; and beer guys like Dave Thibodeau, Brian McEachron and Scott Bickert. These are the folks who entertain us, feed us and help us get our buzz on night in and night out.

The Shelf was always more than just a 1,050-word weekly assignment about music and beer. I regularly dabbled in other topics, like politics, sports, fishing and hunting, cooking, movies and television, and life and death. I eulogized my baby son, Gus, in 2011; a few years later, I wrote about Mom’s passing; and, in 2017, I memorialized my little brother, Billy. My Front of the Line Gang festival buddies Dancing Pat and Scott Spencer were remembered fondly in these pages after their untimely deaths. Missy always let me bare my soul, for better or worse.

There are many people I need to thank. First, there are hundreds of musicians that I’ve gotten to know through the years, some Grammy-winning, others happy to sing to a few folks on a patio on a rainy summer night. The presenters who put on festivals – like Brian Eyster of Planet Bluegrass, Steve Gumble of Telluride Blues & Brews and the countless board members of the Durango Bluegrass Meltdown – are forever in my debt.

My colleagues at my day jobs had to put up with my folly – including folks at Fort Lewis College and, later, KSUT Public Radio. Some liked The Shelf. Some hated it. The damn thing nearly got me fired on more than one occasion.

My buddy Bryant Liggett was my counterpoint at The Durango Herald and KDUR. It was always my aspirational goal to be as good as Liggy. I never was.

My family served as my weekly sounding board. Poor Shelly, Otto and Billy were subjected to hundreds of over-dramatized recitations – often with certain paragraphs re-read dozens of times as I made spontaneous edits. Sometimes these were done late at night or early in the morning in cheap motels, hospitals and even in the car.

I thank the loyal Durango Telegraph readers for letting me share my ramblings … my descriptions of the man cave, my Wild Game Super Bowl spreads, my drunken sprees, my hangovers and my goosebump moments at festivals.

Mostly, I thank Missy and Lainie and the rest of my Tele family. They put up with my tardiness, forgetfulness and crankiness and became my sisters. When Missy was named one of the Extraordinary Women of the Year at the Women’s Resource Center’s 30th anniversary event, she thanked me for being one of the Telegraph girls. I’ve never received higher praise.

We’ve reached the bottom of the barrel.

And he walked on down the hall. Email me at chris@ksut.org. ?