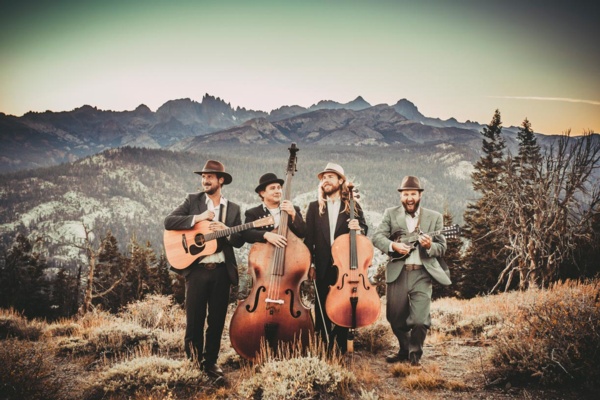 Sweetwater String Band brings its "high Sierra soulgrass" to the San Juan Brewfest on Aug.17. We are telling you now because tickets go like hot cakes,whatever those are.

America’s best and brightest vie for world dominance in sports we only watch every four years. We’re good sheep. We let NBC shepherd the order we see the events on our idiot boxes (highlights from popular sports are aired in prime time, particularly if the Red, White & Blue wins gold). Officially, 306 sets of medals in 28 Olympic sports will be handed out to athletes from 206 nations. But what we’re force fed (at least on the main NBC channel) is primarily American highlights, obnoxious segments about the tragedies that each American athlete had to overcome (Michael couldn’t handle the pain and pressure of winning 18 gold medals, so he turned to drugs and booze), and the occasional breathtaking performance from an athlete from another country. All this interspersed with obligatory “America by Budweiser” commercials. Fortunately, the deep channels of the NBC network feature real-time competition in a variety of lesser-known sports like fencing, table tennis and equestrian events.

And since pros were first allowed to compete in the 1980s, we get to see Dream Teams of Americans, Russians, Chinese, Spaniards and Brazilians beat up on their underfunded foes.

While Herr Drumpf might not succeed – and what a glorious shit show of a week he had! – at least Carmelo Anthony, Alex Morgan and Michael Phelps will Make America Great Again. Take that Fiji, Suriname and Laos!

As music festivals wind down, beer fests are just getting started. The second annual Mancos Valley Summer Brewfest takes place from 10 a.m. ‘til 7 p.m. Saturday at Cottonwood Park in Mancos.  Advance tickets cost $15 (it increases $5 at the gate) and includes admission to see a variety of bands, including Hello Dollface, the Afrobeatniks, the Lindells, Secondhand Strings and the Great Connection. Tokens for suds from Mancos Brewing Co. and Pagosa’s Riff Raff and wines from Guy Drew Vineyards cost extra. All proceeds from the event will be donated to Mancos Valley Resources, Mancos Food Share and the Pay It Forward Fund … three groups that serve the residents of the Mancos Valley.

Tickets are already on sale for the San Juan Brewfest, to be held Aug. 27 in Buckley Park. This one has sold out early the past two years, so advance purchases at sanjuanbrewfest.com are recommended. This year’s event features 54 breweries from around the country, including first-timers Goose Island (Chicago), Full Sail (Oregon), Melvin (Wyoming) and Ballast Point (San Diego). Of course, all six Durango breweries will be on hand, plus many regional favorites. The music is bluegrass themed this year, including the headliners, the Sweetwater String Band. Local hippie-kid favorites Liver Down the River is also on the bill, meaning the dance floor will be stomping. There are a variety of packages available, including VIP, upgraded general admission, general admission and designated driver.

Seats are extremely limited for the Durango Blues Train, which takes place Friday & Saturday and usually sells out. The second weekend of blues trains this summer features Todd & the Fox, the Hazel Miller Band, JW-Jones, Low Volts, John Long and Reverend Deadeye. Brought to you by the same folks who book Telluride Blues & Brews, these blues trains often feature artists who’ve appeared on the main stage and evening juke joints at the annual September shindig in Town Park.

Warsaw Poland Brothers have a long history with Durango, although it’s been a few years. Their 25th anniversary tour finds them at the Animas City Theatre at 9 p.m. tonight (Thur., Aug. 11), along with Buster’s Ghost and DJ I-Gene. The gangster ska band from Tucson has buzzed through town dozens of times in their 25-year history and was one of the first bands – if not the actual first – to play Ska Brewing’s original brewery in Bodo Park. This will be a damned fine rowdy time.

The Fabulous Thunderbirds headline the 18th annual Crestone Music Festival, which runs from Friday through Sunday in the tiny town in the Sangre de Cristos. The funky, three-day affair features everything from hip-hop and reggae to blues and bluegrass. Other acts include the T Sisters and BandaBordel, the latter a combination of two French groups.

To round out their summer tour and fresh off the Fred Shellman Stage at the Telluride Jazz Festival, the Stillwater All Stars will perform Saturday at the La Plata County Fair for the Community 4-H Barbecue Cook-Off. The All Stars kick off the music at noon, followed by Stillwater adult band Animas Rocks (1:20 p.m.) and local bluesman Kirk James accompanied by the Stillwater faculty and student saxophonist Holden Becher (2:45). Seven Sharp 11 rounds at the afternoon with funky jazz at 4.

Moe’s madness this week gets started with Flab playing Funked Up Friday from 7-10, followed by DJ Noonz. DJ Kaztro spins on the patio from 10 ‘til close Saturday. Then on Monday, Missy & The Bluestones host their weekly blues jam starting at 7.

The Irish Embassy’s Underground hosts TGIFF music Friday. As this week’s theme is Folk Friday, Elle Carpenter and Fellowship of Strings play at 7:30 and 9:30 p.m., respectively.

Elsewhere: Pete Giuliani & Richard Leavitt work the Animas River Café at the Doubletree Hotel from 5-9 p.m. Friday, while Nina Sasaki & Dave Rusk play there from 5-9 p.m. Saturday; Chokecherry Jam brings bluegrass to Wines of the San Juan near Blanco, N.M., from 4-7 p.m. Sunday; the Black Velvet Trio returns to the Balcony at 5 p.m. Sunday; and Kirk James has a particularly busy week. He’ll be at the Kennebec Café tonight (Thurs., Aug. 11) from 5:30-7:30; with his band in a Stillwater performance at the Durango Arts center on Friday; at the Smiley Café’s Blues for Brunch from 11 a.m. to 2 p.m Saturday; the aforementioned Fairgrounds BBQ Saturday afternoon; and the Balcony at 5 p.m. Wednesday.

No time for losers? Email me at chrisa@gobrainstorm.net.