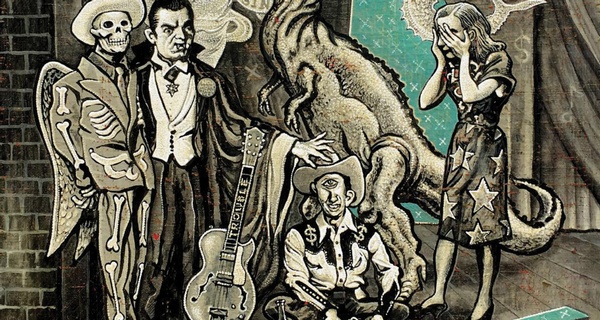 Bloodshot Record's 25th anniversary compilation. Stop what you're doing and get one now.

Every once in a while, something truly cool comes along in the mail. Last week, it was a CD of Bloodshot Records’ 25th anniversary compilation, “Too Late to Pray: Defiant Chicago Roots.” For the uninitiated, Bloodshot is an independent record label based in Chicago that has regularly produced some of the most authentic alternative country music of the past quarter century. Equal parts country and punk, Bloodshot artists are irreverent at times, while holding the ethos of Hank, Cash and Willie dear to their hearts.

The label was founded in 1993 by Nan Warshaw, Rob Miller and Eric Babcock. Warshaw and Miller had met the year before and deejayed on Wednesday country nights at a Chicago bar called the Crash Palace. On one night, they wrote down a wish list of their favorite Windy City underground country bands on a cocktail napkin. That list eventually became the label’s first release, “For a Life of Sin: A Compilation of Insurgent Country.” Bands like the Bottle Rockets, Robbie Fulks and the Sundowners were on that release.

Fast forward 21⁄2 decades, and Bloodshot’s stable has included such groundbreaking acts as Neko Case, Alejandro Escovedo, Waco Brothers, Old 97s, Split Lip Rayfield and dozens more. The music is often too edgy for KSUT (although I break format and spin their acts from time to time, as do a few other rebellious DJs out here). Bloodshot albums are a staple on KDUR, a station that regularly plays college rock. Aside from those two outlets on the bottom of the FM dial, you’d be hard pressed to find another station in La Plata County that’s even heard of the label.

My copy arrived in a coffee-stained, padded envelope. It was so drenched in liquid that it bled through onto the packaging and liner notes. While it was a fitting presentation for my new album, it would’ve been more appropriate to have been soaked in bourbon, beer and blood. Such is the irreverence of Bloodshot.

Longtime favorites like Fulks, the Handsome Family, Kelly Hogan and Jon Langford (best known for his work in Waco Brothers and Mekons) appear. But, as with every Bloodshot collection, it’s the artists you don’t know that warrant closer listens. Wild Earp & the Free for Alls, the Hoyle Brothers and the Western Elstons all caught my ear with their vintage honky-tonk. Joybird and Half Gringa presented ethereal, moody Americana. The Family Gold and the Dyes both presented insurgent bluegrass roots. And Bethany Thomas & Tawny Newsome and Los Callos did minimalist, lo-fi college rock.

Maybe I’m an old-fashioned jackwagon, a curmudgeon or an old dog turning his nose up at new tricks. But any band that dresses like Porter Wagoner or Marty Stuart, plugs a Telecaster into a vintage amp and plays with the energy of the Sex Pistols gets my dime any day of the week.

At our KSUT Members’ Party & Silent Auction a few weeks ago, a sophisticated woman in her early 30s bought a stack of vinyl that included an autographed copy of the new Wilco, an eight-LP Sly & the Family Stone box set and a rare Ramones live collection, along with a coffee table book on American roots music. She oozed cool and would probably sacrifice a small farm animal for a vinyl copy of “Too Late to Pray.” You could be this cool, too, if you gave Bloodshot’s 25th anniversary disc a spin.

If you were a young adult in the 1990s, Jason Mewes and Kevin Smith spoke to you. As Jay & Silent Bob, they brought a twisted sophistication to the slacker lifestyle through classic films like “Clerks,” “Mallrats,” “Chasing Amy,” “Dogma” and several other classic films. They’re also no strangers to the Community Concert Hall and will screen their latest film, “Jay & Silent Bob Reboot,” at 7:30 p.m. tonight (Thurs., Nov. 21). The New Jersey stoner icons first hit the screen 25 years ago and have aged well. When they discover that Hollywood is rebooting an old movie based on them, the clueless duo embark on yet another cross-country mission to stop it. Following the screening, they’ll field questions from the audience. VIP packages are available, which include combinations of meet & greet experiences, photo opportunities and exclusive merchandise.

The Concert Hall hosts another in its “Artists You Should Know” events at 7:30 p.m. Saturday when Daniel Ward & Heidi Swedberg perform tunes from a variety of genres on their ukuleles with all spectators seated onstage with them. They’ll be accompanied by a local rhythm section (yay, Jim Belcher!) While you may not know Swedberg for her musical prowess, you probably remember her role as Susan Ross, the fiance?e of George Costanza on “Seinfeld.” Ross met a horrific fate when she was poisoned after licking envelopes for her wedding announcements, but Swedberg has lived on, both on the screen and onstage. She’s also a veteran of such TV shows as “Murder, She Wrote,” “Star Trek: Deep Space Nine” and “Grace Under Fire,” as well as the movies “Kindergarten Cop” and “Hot Shots!” Born in Hawaii, she grew up playing the ukulele and has released a handful of albums with the Sukey Jump Band and the Smoking Jackets. Ward is a member of the latter. He’s an accomplished musician in a variety of styles, including Mexican mariachi, Spanish flamenco, world music and jazz on both ukulele and guitar. He’s performed all around the world with masters like Ottmar Liebert. Both are veterans of the Rocky Mountain Uke Fest. The duo will also appear at a KSUT Session at 3:06 p.m. today.

The Unitarian Universalist Fellowship of Durango presents its second recital of its 2019-20 series at 7 p.m. Friday at the UUFD (419 San Juan Dr.) This time around, the Mangold Duo – Bonnie Mangold on cello and Marilyn Mangold Garst on piano – will perform works by Beethoven, Hovhaness, Papandopulo, Bruch, Schumann and Piazzolla.

I had to jump on the plane and leave all my clothes behind? Email me at chrisa@gobrainstorm.net.