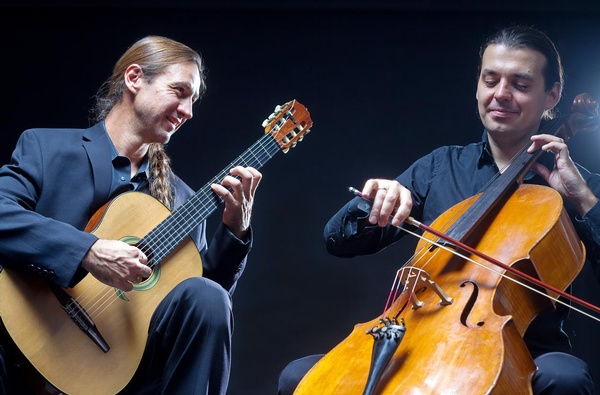 The Richter Uzur Duo, comprised of guitarist Brad Richter and cellist Viktor Uzur, plays the Concert Hall on Tues., May 2, at 7:30 p.m.

Spring has sprung. Grass is straining to be mowed, gardens are groaning to be planted and little league baseball is lighting up the evenings. Concerts at local venues are fewer and further between, especially now that the Durango Bluegrass Melt-down has come and gone. So be it. Soon, we’ll all gather at the Balcony for Mexican Loggers and local bands on Friday afternoons, with the smell of barbecues in the air.

For those of us who are festivarians, we’re already circling our calendars for annual treks to Telluride, Pagosa and beyond.

It’s a special time of year, when we can wake up to a dusting of snow only to see the clouds blow away to reveal 70-degree afternoons. Grab that sunscreen.

The Community Concert Hall’s season may be winding down, but there’s still some quality music in the weeks to
come. Tuesday finds the venue hosting the Richter Uzur Duo at 7:30 p.m. Guitarist Brad Richter and cellist Viktor Uzur are consummate performers and accomplished composers who have each played around the world to critical acclaim. Together, they pair exquisite originals with blazing improvisations and iconic works by Bartok, Gershwin, Rimsky-Korsakov and Saint-Saens. Their program combines elements of classical, rock, Eastern European folk and North American indigenous music.

The Four Corners Rainbow Youth Center hosts a spring benefit for LGBTQ youth at the Powerhouse Science Center this Friday from 6 – 10 p.m. All are invited, and the event features live music from Carute Roma and Denae Benally, food from Norton’s and Bread, beer, wine, and an auction.

Fresh off their packed house at the Wild Horse Saloon during last week’s Durango Bluegrass Meltdown, The Lawn Chair Kings continue their sonic assault on downtown Durango at 9 p.m. Saturday at El Rancho. The Kings getting active is a sure sign of the season.

1. Sell out! For the first time in the festival’s history, the Melt-down sold out. From my vantage point as emcee at the Durango Arts Center on Saturday, I noticed that even the local bands were playing to hundreds of people. Regional acts drew near-capacity and the national headliners had people stretching out the door.

2. Fellowship of the Strings. The jammy, bluegrassy side project of Liver Down the River (Dylan Ruckel, Patrick Storen and Tyler Rice are members of both groups) lit the DAC on fire Sunday afternoon. I jumped on the Yonder train early ... back in 2000, when they first played the Fred Shellman Stage. And I saw dozens of Leftover Salmon sets at Farquahrts back in the early ’90s. It’s not hyperbole to cite a similar energy with the Fellowship.

3. Danny Barnes Trio. I only saw the Friday night set at the DAC, but was thoroughly impressed with Barnes’ skills as a band-leader. Rather than steal the show with his own fretwork, he stepped back and played subtle, jazzy fills while allowing the spotlight to shine on guitarist Grant Gordy and Joe K. Walsh. Tasty covers of Uncle Tupelo and Lefty Frizzell (the latter sung by Walsh) didn’t hurt, either.

4. Town Mountain. This Asheville, N.C., quintet is the new heavyweight in town, drawing a passionate base that rivals Leftover Salmon in their ’90s Durango heyday and The Gourds when they were selling out everywhere they played. Robert Greer’s vocals, Jesse Langlais’ banjo picking, Phil Barker’s mandolin chops and new-comer Jack Devereux’s fiddling make them a bluegrass tour de force.

5. Rapidgrass. The Idaho Springs-based group is a name you should remember. Jam-based yet traditional, with strong songwriting and some of the best pickers on the Front Range, these guys have a bright future.

7. Six Dollar String Band. A member of the Freight Hoppers – one of the most energetic old-time string bands on the scene – was overheard telling Six Dollar bassist Stephen Sellers that they were the Judas Priest of old time music. He used some rather colorful adjectives to describe them, too ... ones my editor won’t let me print. You know what? He was right. Fueled by Robin Davis’ guitar, Six Dollar ain’t no ordinary string band. Sitting in the front row and watching Davis play along note-for-note with Tony Holmquist’s fiddle solos made me wonder what would have happened if the banjo-plucking kid in “Deliverance” had been a meth addict (musically speaking, of course).

8. Kathy Kallick Band. Women took a back seat in bluegrass for most of the genre’s first four decades. Fortunately, visionaries like Kallick, Laurie Lewis and Sally Van Meter formed the Good Old Persons in the Bay Area back in the day and created gender equality within the genre that has since given us Allison Krauss, Rhonda Vincent and thousands of other female bluegrass artists.

9. David Parmley & Cardinal Tradition. I only caught them once, during their Sunday gospel set. Parmley began plying his craft in the mid 1970s as a teenager and hasn’t stopped. Gospelgrass is sometimes too preachy for me, and certainly filled with ballads and slower spirituals. But Parmley rocked.

10. Otto at the mic. At some point on Sunday, Town Mountain’s Robert Greer and my 10-year-old, Otto, hatched a plan for Otto to introduce the band’s final set. The day’s emcee was Rusty Charpentier, one of the nicest guys you’ll ever meet and a heckuva fiddler in his own right. Rusty introduced Otto, lowered the mic stand and my boy uttered the words, “Um. Please welcome Town Mountain!” After an applause from the crowd yet before he opened his mouth, a heckler across the room accurately shouted, “You’re smarter than your dad!” I nearly wet my pants. At the urging of the Meltdown’s Elwin Johnston, Otto again took the mic after the encore to thank the audience, the bands and all the sound people.

A two bourbon twilight, fog from God’s cigar? Email me at chrisa@gobrainstorm.net.