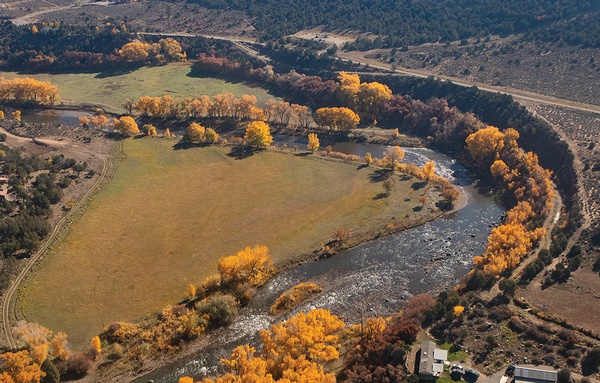 The Animas River has received plenty of TLC over the years, but organizers are now trying to put all those efforts under one umbrella with a stream management plan./?Photo by Stephen Eginoire

Imagine if there was a way to get all the efforts to improve environmental and recreational conditions on the Animas River under one umbrella, and in doing so, open up avenues for funding those projects.

Oh wait, there’s a name for that in Colorado – a stream management plan (SMP). And efforts are under way to see if the community is interested in such a plan and how big the undertaking should be.

For years, several nonprofits, government agencies, citizens and other stakeholders have spearheaded attempts to improve the Animas River. But now, it appears these stakeholders are interested in merging their respective efforts under an SMP, which could better organize projects and increase opportunities for grant funding.

“I think we could be entering a new phase of the Animas River,” Laura Spann, programs coordinator with Southwestern Water Conservation District, said. “(An SMP) might be a way to build a broader vision with all the groups.”

Stakeholders are in the very early stages, just gauging whether there’s public interest to develop an SMP for the Animas. In other parts of the state, the plans have been used to improve fish habitat, increase river access and restore riparian areas.

“These plans are specifically designed to look at the needs of a river basin, or part of a river basin, as it relates to recreational and environmental needs,” Warren Rider, coordinator of the Animas Watershed Partnership, which is leading the SMP process, said. “About a year ago, we started to think now could be a good time.”

In 2015, the state of Colorado adopted the “Colorado Water Plan,” which set goals to help manage increasing water demands while protecting natural resources. Within the Colorado Water Plan is an objective to implement SMPs on 80% of river basins across the state by 2030.

Requests for comment to the Colorado Water Conservation Board, the principal funder for SMPs statewide, were not returned. But, the state’s website for SMPs says many communities have an “economic interest in maintaining healthy watersheds and rivers, but few have developed voluntary strategies to comprehensively protect river health and their flows for ecological and recreational uses.

“At the same time,” the state’s website continues, “there is insufficient data in many places to identify needed actions. SMPs provide a process to fill this gap, collect relevant data and plan to meet the needs of water users while maintaining healthy aquatic ecosystems and fisheries.”

Durango’s beloved Animas River has received plenty of TLC over the years, tackled by a number of groups with a vested interest in or love for the waterway that cuts through the heart of Southwest Colorado, from its headwaters in Silverton as it flows into New Mexico.

While those efforts have resulted in a river that has both better water quality and public access, there seems to be a general consensus that it’s now time to channel this momentum into a comprehensive process.

“In the Animas, there’s such broad interests … and hopefully this brings all these groups together into one, single vision,” Steve Wolff, general manager of SWCD, said.

Now in the early stages of Phase 1, an estimated 40 stakeholders have been interviewed by SMP organizers to identify the issues important to them, and if they’d support a plan. These stakeholders represent varying interests in the Animas – including rafting companies, conservation districts, ranchers and farmers, environmental groups, and residents.

“We’re just trying to gather information to think about what scale we should try to wrap our arms around for the actual plan and figure out what makes most sense for the Animas,” Rider said.

So what really can an SMP accomplish? Looking to the east, the Upper San Juan Watershed Enhancement Partnership, which formed in 2018, just recently helped leverage funding to improve Yamaguchi Park in Pagosa Springs with river stabilization, boater access and needed water diversions.

For the Animas, the wish list could go on seemingly forever: more boater access north and south of town; remediation on the stretch near Bakers Bridge impacted by gravel mining; improved habitat for fish and anglers; and riparian corridor health projects, such as Russian olive tree removal.

“(An SMP) shows people have been communicating about certain projects, and that the community generally knows what they want for the river,” Butler said.

One such project could be improving river put-ins around Durango. In 2013, the city adopted the “Durango Animas River Corridor Management Plan,” which, among other things, helped secure river access at Oxbow Park & Preserve. But, in that plan, the city hopes to improve the put-ins at 29th St., 32nd St. and Santa Rita Park with better parking, ramp access and restroom facilities. The problem, however, is funding.

The city’s plan also calls for in-stream improvements in about 11 spots along the Animas, which could help fish habitat and allow river runners to float at lower flows, which is increasingly important as drought continues to impact the region.

John Brennan, a local boater who has been involved in Animas River-related issues since the 1980s, said the improvements could help rafting companies, one of the biggest economic drivers in the region, extend their season – or at least maintain the status quo as drought continues.

“We’re not going to have high water anymore, and our season keeps getting shorter and shorter, so it’d be nice within (the SMP) to see some in-stream improvements,” Brennan said. “Don’t forget the users; there’s a lot of things we can do to improve the river that can be done inexpensively.”

There’s also a big question that needs answering: Does the SMP include the entire Animas River watershed or just select segments?

Does it make sense, for instance, to include the stretches around Silverton, where the Environmental Protection Agency has a Superfund site addressing mine pollution? Or, the stretch below Silverton to Bakers Bridge, which is incredibly remote with few access points?

Another issue to consider is the Southern Ute Indian Tribe’s interest in the plan. With tribal lands dominating the banks of the Animas south of town, is there an opportunity to expand access in those stretches? A SUIT spokeswoman did not respond to requests for comment, but Rider said the tribe is aware of the planning and in some capacity wants to be involved.

Looking at other Colorado communities, the Yampa River, for example, has included the entire basin. The Upper San Juan, on the other hand, has incorporated only the upper stretches above Pagosa Springs.

After organizers complete interviews with stakeholders, they’ll draft a “scope of work” document that outlines what the SMP could cover. From there, it’ll depend if there’s enough community support for the plan to progress into actual work on the ground.

While a lot remains to be determined when it comes to the Animas River’s SMP, one thing is clear: creating one may have incredible benefits, especially as climate change and drought take their toll on environmental conditions.

“The Animas is a culturally critical basin in Southwest Colorado,” Spann said. “A lot of groups are already working on the Animas, but this is an opportunity to coalesce around a common plan, which can also help us access more funding and build more trust among stakeholders.”