1A passes; Baxter, Noseworthy voted in 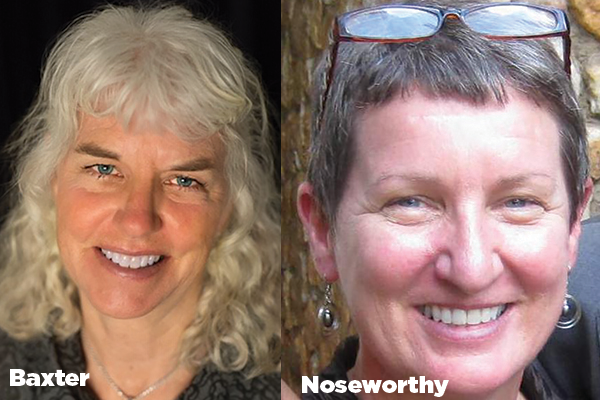 Local residents will be opening their wallets a little wider and seeing two new faces on Durango’s City Council. In Tuesday’s City election, the 1A tax measure passed by a slim margin, while Kim Baxter and Barbara Noseworthy were elected to fill term-limited council seats.

“I’m really excited and so appreciative of everyone who helped,” said top vote-getter Baxter, who admitted to still riding a bit of an adrenaline wave. “I had a hard time falling asleep last night.”

Baxter and Noseworthy will fill the seats vacated by Dick White and Mayor Sweetie Marbury who both served two four-year terms. As the top vote-getter, Baxter will serve as mayor in 2021, following Mayor Pro-tem Melissa Youssef and Dean Brookie.

Baxter said her time knocking on doors was important in giving her a grasp on what local residents value. “I found that the character of the town is very important,” she said.

Her priorities are to keep Durango multi-generational though affordable housing and good jobs so people of all ages and incomes can live here.

She also said she will focus on making good decisions with City spending now that 1A has passed. “I want to give people trust and confidence moving forward,” she said.

Noseworthy, who had just finished walking her dogs Wednesday morning and joked she will probably start needing to carry her phone with her at all times, said she was “thrilled” with the outcome.

“I did the best I could but took nothing for granted,” she said, also admitting to knocking on a lot of doors and “meeting a lot of dogs.”

“In the end, it was up to the voters to decide,” she said.

Like Baxter, she also addressed the need to tackle the City’s shrinking budget with a keen eye. “With 1A passing, it takes some pressure off, but we still have to address the budget issues,” she said.

She also gave kudos to fellow candidates Wisner and McMillan on a clean race and wished to thank all former and current city councilors and county commissioners for their service. “It’s not an easy job,” she said. “I want to thank Marcos and Jaime for putting their hats in the ring, it was a civil and friendly race. No one was running against anyone.”

The only other issue on the ballot was measure 1A, a half-cent sales tax increase to pay for road repairs and upkeep. The measure was the second attempt by the city to raise taxes to pay for infrastructure in a year. The much-broader 2A, which would have increased sales and property taxes to pay for streets as well as a new police station, was soundly defeated last November. The more-streamlined 1A narrowly passed by l95 votes, 2,305 to 2,110.

Ballot measure 1A will increase sales tax by 0.5 percent – from 7.9 percent to 8.4 percent – to raise no more than $4.69 million a year for construction, operation and maintenance of streets, alleys, curbs, gutters and sidewalks. The fund will be overseen by a citizen advisory board, and the tax will sunset in 10 years.

Two campaigns emerged on either side of the issue. “Citizens for Making Durango A#1,” which was chaired by former city councilor Christina Rinderle, was pro-1A. In its argument it pointed to rising costs of labor and materials as well as the slow siphoning of City income to internet sales. The group also argued it is more cost-effective to makes repairs now than later, when streets reach failure.

Coming out against the tax increase was “United for Durango’s Future,” led by former council candidate David McHenry. Opponents of the tax increase argued the City could find funds elsewhere, such as in the half-cent sales tax dedicated to parks, rec and open space passed in 2015.

“I’m very happy that 1A passed and will be having a positive impact on our community,” Rinderle said Wednesday. According to her, deferring maintenance would only cost taxpayers more in the long run, to the tune of $2 million to $4 million a year.

“I just wanted to say thank you to people who recognized how much this vote means to the community,” she said. “An ounce of prevention is worth a pound of cure, and preserving parks and rec spending is so important to our economy and quality of life.”

According to the city clerk, 4,432 city residents voted in Tuesday’s election – about 37 percent of the nearly 12,000 ballots that were mailed out.