A ferret is born
Can a cloned baby black-footed ferret save her species? 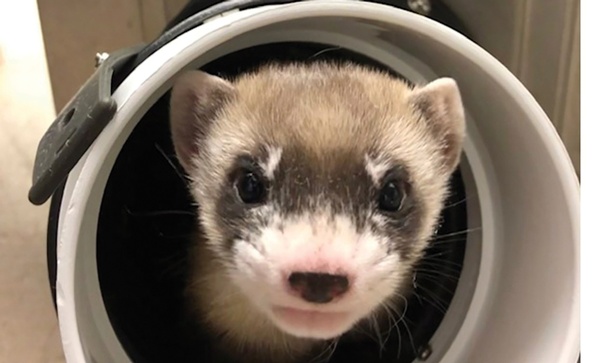 Elizabeth Ann peers out from her cage at the National Black-Footed Ferret Conservation Center outside of Fort Collins./Photo courtesy U.S. Division of Wildlife

A small face pokes its nose through the bars of a metal cage, curious about the two women who’ve entered the room at the National Black-Footed Ferret Conservation Center outside of Fort Collins.

“This is mama,” Bortner said. “Normally if this was a black-footed ferret, we could not do anything like what we’re doing now, which is handling her. It’s very different for us to work with ferrets that don’t want to bite you.”

The friendly, domestic ferret she’s holding is a surrogate mom to the first cloned endangered species native to North America, a black footed ferret named Elizabeth Ann, who is hidden in the nest box.

To get the baby ferret out of hiding, U.S. Fish and Wildlife veterinarian Della Garelle uses a small handling cage and places her on the scale. She weighs in at 816 grams.

“Very good weight for a female black-footed ferret,” Bortner said. “She has all the usual characteristics of her species which are the classic black feet, a black tip tail. And she’s got her black mask.”

Elizabeth Ann might look like all the other black-footed ferrets at the center, but she is unique. She’s the clone of a ferret who died in the 1980s.

“It’s pretty inspiring that people 30 years ago saved those tissues, in case this could happen someday. So dreams do come true,” Garelle said.

The bigger dream is to get the black-footed ferret off the endangered species list, Garelle said. To help save this little mammal – one of the most endangered animals in North America – found in Colorado and several other states, scientists brought Elizabeth Ann into the world.

Biotechnology nonprofit Revive & Restore collaborated with the U.S. Fish and Wildlife Service to bring this clone to life.

“Elizabeth Ann stands to bring in this huge boost of diversity for the species,” Ben Novak, the nonprofit’s lead scientist, said. “Today every black-footed ferret is related to each other, somewhere between a sibling and a first cousin.”

The black-footed ferret was once thought to be extinct. In the early 1980s, a ranch dog in Wyoming dropped a carcass off on its owner’s porch. Biologists tracked down where it came from, and eventually captured the last known group of wild black-footed ferrets. Only seven of those passed down their DNA.

“Elizabeth Ann was cloned from the tissue of a ferret named Willa, who actually has no living descendants,” Novak said. “By cloning her, Elizabeth Ann is actually a potential eighth founder for this population.”

Habitat loss, disease and the decimation of prairie dog populations – a black-footed ferret’s primary source of food – drove these animals close to extinction. There are now around 500 in the wild. Novak believes Elizabeth Ann embodies a paradigm shift for conservation efforts.

“We're being proactive. A lot of times in conservation, we are reacting to a crisis that's urgent in the moment,” Novak said. “So we cloned Elizabeth Ann to bring in new genetic diversity and get ahead of those problems so that hopefully they'll never happen.”

Wild black-footed ferrets need human intervention to stay healthy, like vaccines and insecticides to control flea populations that spread disease. Increased genetic diversity from Elizabeth Ann could help protect these animals from some of these issues.

Novak said the group is looking at different “genetic rescue” solutions to all of the threats the animals face, so that one day they no longer need the help of humans to survive.

Revive & Restore is still working on what Novak calls its moonshot projects, like bringing back the woolly mammoth. A project like that could take decades. In the meantime, their new technology could work on other conservation challenges faster.

“We are at the dawn I believe, not at a culmination of our understanding about how these kinds of samples can be used,” Oliver Ryder, the director of conservation genetics at San Diego Zoo Global, said.

Ryder was the one who asked for the samples of Willa in the 1980s from the veterinarian who was working with the captured black-footed ferrets.

“I told him how important I thought it might be, to get a small skin biopsy and that we could grow cells form it,” Ryder said. “I went home, and then later some samples arrived in the lab.”

Ryder said he didn’t know those samples would one day result in a clone. For more than 30 years, the black-footed ferret cells were kept at the Frozen Zoo in San Diego, a collection of cryopreserved animal tissue samples. Last year, they were turned into embryos by the commercial cloning company ViaGen Pets in New York, where they were implanted into the domestic ferret.

“The combination of these technologies can really provide a basis for ensuring that we have wildlife populations in the future,” Ryder said.

Elizabeth Ann will live at the conservation center, along with her identical-cloned sisters who are on the way. There are hopes of cloning a male ferret who died around the same time as Willa, who could “make the optimal husband for Elizabeth Ann,” Novak said.

“If everything goes really well, we could end up seeing some children or grandchildren of Elizabeth actually going into the wild and bringing that genetic boost to the ferrets across the Great Plains,” Novak said.