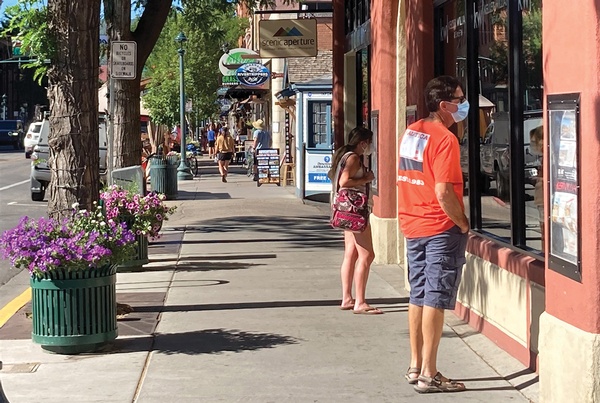 Folks peruse the latest real estate offerings during a stroll on Main Avenue last summer. Ballot question 1-A is asking local voters to approve an increase in lodgers tax – a tax paid by visitors renting hotel rooms and other accommodations – to help fund transit, arts and tourism marketing./File photo

With less than five months’ respite from the last election, Durango voters will soon be headed to the polls (or mail or drop boxes) to weigh in on an impressively large field of City Council candidates (seven) as well as an increase in the city lodgers tax.

While those wanting to know the deepest thoughts and secrets of council candidates will have to wait till next week, this week we tackle Ballot Question 1-A, aka the lodgers tax. Or lodger’s tax, depending on your affinity for punctuation (for the purposes of this story, we will go sans apostrophe.)

Now that that’s out of the way, let’s dive into the deviled details of this tax, which includes lots of numbers, so stick with us. But before we get too deep into the weeds, let’s back up the lodgers tax train. First approved by City Council in 1980, the 2 percent lodgers tax is charged to visitors when they rent rooms in a hotel, motel or B&B, a vacation rental, or even a spot in a campground. Currently, 60 percent of money from that tax, which generates about $500,000 a year, goes to marketing and advertising via Durango’s official tourism arm, Visit Durango; 30 percent goes to transit; and 10 percent to special events and administration.

However, with the 2008 recession and ensuing budget fall-out, city leaders were forced to make cuts to services and amenities. Some of those services, such as transit and arts funding, have never fully recovered. That was when City Council approached business leaders, the tourism office and other stakeholders about exploring another revenue stream from lodgers tax to help offset those losses. An increase in the lodgers tax seemed like the path of least resistance, as 1) it would be paid by visitors and not residents; and 2) Durango currently has one of the lowest lodgers taxes in the state.

The resulting solution, measure 1-A, was presented to councilors earlier this year. The ordinance would increase the tax to 5.25 percent starting June 1, equating to about $4.22 night for the average $130/night hotel room. The tax is expected to bring in an estimated $2 million in 2022, the first full year it would be in effect. The measure also tweaks the spending formula as follows:

• 20 percent toward transportation and transit services

• 14 percent to arts and cultural events

“This time around, working with the Council, I feel like we have something that’s for the benefit of the community,” Jasper Welch, chairman of the 1-A initiative effort and longtime local business leader, said. “I think that’s important. I think we need to look at, long-term, how do we sustain Durango and keep what we all enjoy and still have a vibrant economy.”

And while it is easy for most residents to get behind supporting things like the Bluegrass Meltdown, Taste of Durango, Powerhouse Science Center and the Durango Arts Center, the elephant in the room, of course, is tourism. Or in this case “sustainable tourism” – and what exactly that is. The new tax would more than double Visit Durango’s current marketing budget to $2 million a year.

“After last year’s influx of tourists in spite of the pandemic, it’s important to consider what sustainable tourism really means,” commented one resident in a survey gauging sentiment on the ballot issue. “Do we seriously need more marketing?”

Local resident Ellen Stein, who said she is opposed to the measure on many levels, agrees.

“DATO stopped marketing last summer, and people still came. Look what happened to Ice Lakes,” she said. In addition to seeing unprecedented numbers of visitors and resource damage, including human feces and trail erosion, the high-alpine area also saw a devastating fire, the cause of which is still under investigation.

Welch is first to admit no one wants a repeat of the mayhem of last summer, but also notes it was an anomaly due to people not having many travel or recreation options other than drive-to destinations, such as Durango.4

“I don’t think anyone was prepared for last summer,” he said. “I view that as a once-in-our-lifetime situation. But it also showed we really need to have sustainable tourism marketing.”

Welch noted that if the measure passes, Durango will be the first city in Colorado to have “sustainable tourism” written into an ordinance. He said part of that is focusing on shoulder seasons and “managing” tourism, and its fairly new evil twin, overtourism, more so than marketing. For example, last year Visit Durango came up with its “Care for Durango” campaign to target negative impacts of rampant tourism. The campaign is based on results of a resident survey, of which more than 1,200 people voiced their top five concerns with tourism: fire safety; habitat protection (trail erosion, river put-ins, etc.); responsible COVID health precautions; cultural respect; and considerate and safe recreating.

“Part of sustainable tourism is we don’t really need to market summer other than to let people know we’re here. We really need to look at how we can have better your-round visitation,” said Welch. “Management is what they’re putting more focus on, which is, ‘how can we advertise and market the community in a way that protects the environment and suddenly doesn’t make summer too busy?’”

Another major concern voiced over the lodgers tax is that it does not go far enough in funding transit or affordable housing. In Telluride, for example, a 2.5 percent tax on short-term rentals goes to help fund affordable housing.

City Councilor Barbara Noseworthy brought this up at a city meeting in January, suggesting that 45 percent of the tax proceeds go to workforce housing and transit. According to Noseworthy, the city is facing a looming transit financial “cliff” in 2023, when grant funding from CDOT will drop off by half.

“I am not sure why this budget shortfall has not been a regular discussion topic on Council and boards,” she told members of the City’s Multimodal Advisory and Community Relations boards in an email in January. She said the recommended allotment of 20 percent will barely cover current transit services and that another $400,000-$500,000 a year would be needed to reinstate routes that have been dropped, such as Three Springs/Mercy.

In the end, however, Noseworthy was the lone dissenter, and the council voted 4-1 in February to approve the ballot language as it stands.

Stein, who is also a member of the Multimodal Advisory Board, agrees that the money would be better spent on needs other than tourism, sustainable or not, such as re-instating transit routes for underserved populations, and affordable housing. She also feels the measure was conceived in haste.

“The money is not adequate for transit to meet current needs and expansion of the system,” she said. “Should this be where our tax money goes? It seems upside down.”

She also noted the finality of the tax. Unlike some of Durango’s other sales taxes, which sunset after a period of time, the lodgers tax will go on in perpetuity, or until citizens vote to change it.

“My main concern is we’re locking it in,” Stein said. “All our other taxes have a time frame, which allows for more flexibility and respect for the range of municipal needs.”

While Welch admits affordable housing is a noble cause that must be addressed, he said the huge scope of it is outside the somewhat modest means of the lodgers tax.

“That is a bigger issue that you’re not going to be able to solve with this revenue stream,” he said, adding that there are other tools, such as public-private partnerships, to address housing.

In the end, he said the lodgers tax cannot fulfill every need and want. But, it can go a long way to help with some things, like business, arts and culture – something he referred to as the “grand bargain.”

“There are going to be some people who don’t like the grand bargain and would rather have the money allocated to other things,” he said. “That’s the down side. But if it doesn’t pass, I don’t think you’re going to see it come back for a while, and then you have a lodgers tax that is probably lower than it needs to be and is limited on what it can fund … I think that would be a lose for the community.”

There is no organized opposition on the lodgers tax. To read resident’s comments on the issue, check out the “Municipal Election Informational Booklet” that the city recently mailed to voters. To read up on the 1-A campaign’s FAQs, visit tourismfundsdurango.com. 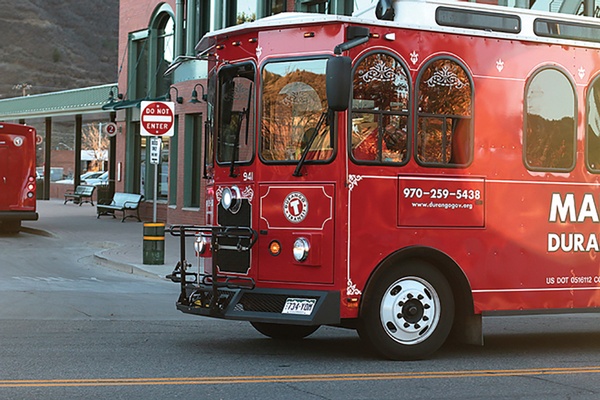 Mass transit would receive funding from the 1-A lodgers tax. But some argue the allotment is not enough and will barely sustain current service, let alone reinstating routes cut due to budget constraints./File photo