A little on the dry side
What the warm, dry weather means for business on Main Avenue 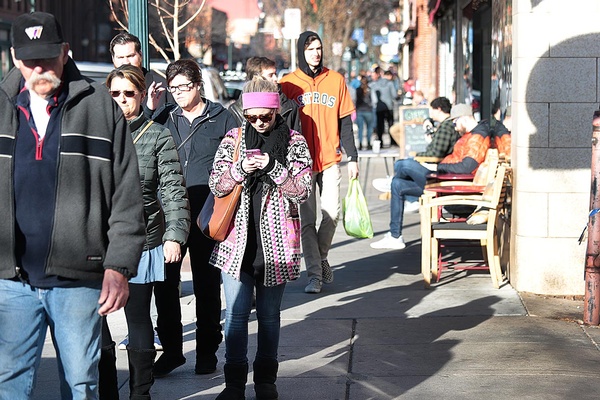 Crowds packed Main Avenue in downtown Durango on Tuesday afternoon. Although most businesses on Main are seeing plenty of foot traffic, they've still expressed concerns for those in the ski industry, as well as for other businesses that could be hurt by the drought, like rafting companies./Photo by Jennaye Derge

In any given year, most residents would have already broken out the skis, snowshoes or snow shovels. The T-shirts would be packed away and playgrounds would be empty. But this year, things are very different.

Residents are still using their mountain bikes, hiking boots and even their boats.

“It’s going to be a year to remember,” Peter Schertz, co-owner of Maria’s Bookshop, said.

Just a few days ago, Schertz found himself canoeing on the Animas River. His family even went for a hike on Engineer Mountain. With no snow on the slopes and sunny days in the forecast, people are finding other things to do, he said.

One spot seeing a lot more foot traffic – literally – is Mesa Verde National Park. Christy Brown, the park’s public information officer, said they are getting more visitors than they usually do this time of year.

Many of the hiking trails typically closed or with limited access, like the Petroglyph Point Trail, are still completely open. Also, the Cliff Palace Loop Road and the Family Terrace Trail, which are commonly used by cross country skiers or snowshoers in the winter, are instead open to hikers.

“It’s a great time to visit the park,” Brown said.

Business has also been booming at Nini’s Taqueria on the southern end of Main Avenue, near the train station. Owner Andy Snow attributed much of the restaurant’s traffic to the Polar Express.

The Durango & Silverton Narrow Gauge Railroad’s annual holiday ride to the North Pole is always a hot ticket in the cold, winter months. Tickets typically sell fast, and visitors purchase those tickets long before they know if there’s any snow in the forecast.

Local brewery and restaurant, BREW Pub & Kitchen, is also on the south end of downtown near the train station. Owner Erik Maxson said this holiday season business has been a little busier than in years past, but that’s also been the trend all year.

It’s hard to say just how much the weather is affecting the bottom line.

Stapleton doesn’t think his Main Avenue music shop has seen any significant declines in business due to the warm weather. If there’s any impact on his business, it’s more likely due to timing.

With Christmas Day falling on a Monday, most holiday vacations were shorter than usual and started over the weekend. Stapleton said his store was packed on the Friday and Saturday before Christmas.

Other businesses along Main Avenue – from restaurants to marijuana shops – have said they were up in sales or, at the very least, it’s been business as usual.

Most of their concerns were about the months ahead. If the snowpack, which is just 22 percent of average, doesn’t catch up in the coming months, it will significantly impact the summer boating season and could increase the potential fire danger.

“I’ll take not having to wear rubber boots, but I think we’ll have to pay for it in the long run,” Stapleton said.

According to the National Weather Service, the forecast for the coming week shows a slight chance for snow over the weekend and perhaps a storm next week. Neither of these forecasts, however, are likely to bring significant snowfall.

But as Jeff Givens, who analyzes weather on his Durango Snow Lovers Facebook page, recently posted, “Anything helps.”

Some forecasters, including Givens, think eventually this current weather pattern will break. The snow could fall throughout February, March and late into the season.

And, as much as he enjoyed his recent canoe trip down the Animas, he said he’s thinking about everyone in the ski industry, many of whom are still waiting to get to work.

Schertz said Maria’s Bookshop – like other businesses downtown – finished off the year pretty solid, something he attributed to both locals and tourists. But it’s important, he added, for all sectors of the economy to be healthy.

“You’ve got to be firing on all cylinders in a local economy,” Schertz explained. “We’ll all feel it if the ski industry is lagging ... We’re all in this together.”

Exactly one year ago, Purgatory Resort was boasting 100 inches of snowfall and the entire mountain was open. Today, their season total is just 22 inches.

With their ever-expanding snowmaking fleet and colder temperatures, the resort’s employees have been able to make enough snow to offer top-to-bottom skiing and get 24 percent of the mountain open.

“While this season has been unusual, Purgatory’s snow-making and grooming teams have done an excellent job,” she added.

Oyler said the resort actually had strong lodging numbers over the holidays despite the lack of snow, and some guests postponed their trips and plan to come later in the season.

While the resort waits for the snow, Oyler said it got creative. The resort has hosted twice as many events as last year, and currently has deals on lift tickets and lodging. It’s also opened the Columbine beginner area for night skiing to combat the loss of night skiing typically available at Hesperus Ski Area.

But she, like others, is feeling positive the jetstream will eventually deliver the real goods.

“I have faith Mother Nature is bringing snow sooner rather than later,” Oyler said. 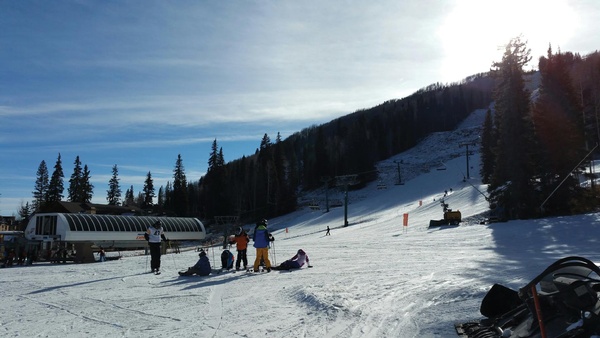 Guests at Purgatory Resort take a break near Lift 1 in the base area on Tuesday afternoon. Snowmaking efforts by the resort's mountain crew combined with 22 inches of snowfall have allowed Purgatory to open up 24 percent of the mountain, even in the dry, warm weather pattern of La Nin?a./Photo by Scott Wachob