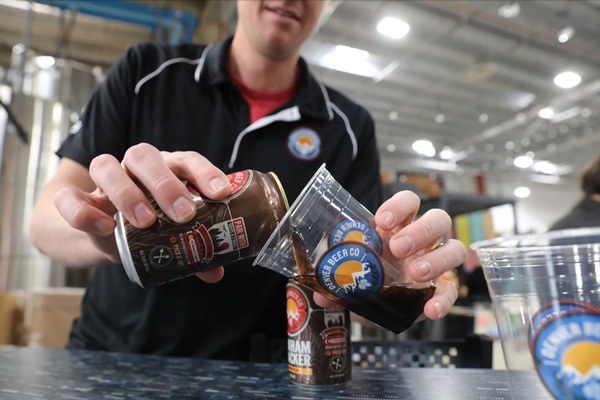 Charlie Berger, co-founder of the Denver Beer Co., pours some beer for a taste test. In a pilot project facilitated by the state health department, carbon dioxide generated during fermentation from the Beer Co. was sold to The Clinic, a Denver cannabis dispensary, to boost plant growth at its grow operation./Photo by Hart Van Denburg/CPR News

The idea was to capture carbon dioxide, which beer releases as it ferments, and sell it to a cannabis company that needs the greenhouse gas to grow its marijuana plants indoors.

It's a simple concept that has a lot of Colorado synergy to it.

The hope was the partnership could be both economically and environmentally viable. Now, the carbon exchange program has proven to be just that after a successful state pilot.

The four-month experiment went uninterrupted by COVID-19, since both businesses were deemed essential and continued operations. For Kaitlin Urso, an environmental consultant for the state and pilot lead, it was an important question even before the worries of the coronavirus: could Denver Beer make enough CO2 to carbonate their own beer and supply the Clinic's needs?

The answer was a resounding yes. “It was just a really great success to see all around,” Urso said.

The Clinic reduced its CO2 costs by 15 percent, and their plants met their growth milestones and expected yields. By having a buyer for its CO2, Denver Beer Co. offset the cost of the equipment that captures and liquefies the gas.

Earthly Labs, the company that created the capture technology, said Denver Beer Co. recovered 93 trees worth of CO2. In a nod to the program, The Clinic's recycled-carbon-grown cannabis line is called "93 Hoppy Trees."

Zach Engel, operations director for The Clinic, believes his company is the first cannabis cultivator in the country to use natural CO2 from a brewery to grow its product. In a statement, Engel said The Clinic will expand its partnership with Denver Beer Co. to further reduce emissions.

While the state's role in this experiment has come to an end, Urso wants to help other businesses take on a similar project.

"Many different industries use CO2 – from laboratories to restaurants, to medical applications to marijuana. Not only cultivation but a lot of concentrates are extracted using CO2 as the solvent," Urso said. "We'd like to see this type of partnership grow."

For more from Colorado Public Radio News, go to www.cpr.org.