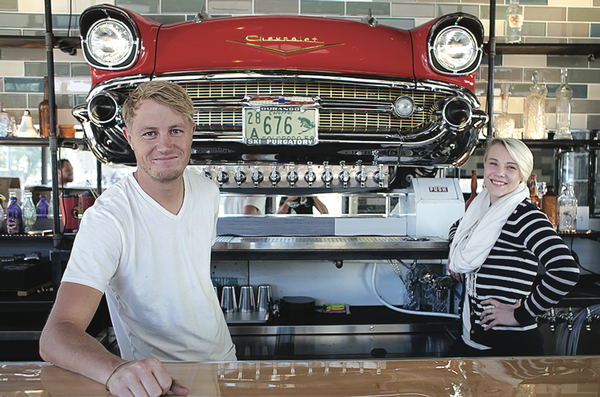 Marcos Wisner, left, and bartender Bridgett Tesmer, right, pose inside the 11th Street Station, a sort of permanent food truck court anchored by a bar. Wisner and his dad, Jaime, converted the space formerly home to the Durango Downtown Smoke Shop and before that, a gas station /Photo by Jennaye Derge

When Carley Snider discovered an old leather book filled with chocolate recipes, she had no idea it would change her life. Naturally curious, she tried making some of the truffles and found she liked making chocolate. In 2011, her hobby morphed into a business: Animas Chocolate Co.

After a few months, the company moved into a retail space in the Rivergate Center and then expanded to its current location on North Main in 2013.

“We’ve just planned to organically grow, and now we’re ready for the next step. We found this amazing place on Main Avenue in downtown that actually used to be Rickey’s Soda Fountain and Confectionary, one of Durango’s first candy and chocolate shops. The original back bar is still in there,” she explained.

The new location at 920 Main Ave. will offer a bigger production space as well as amenities for customers like an espresso bar with many flavors of hot chocolate (and, of course, espresso). Visitors can see employees making chocolate from cacao beans at the “Bean-to-Bar,” or watch chocolatiers at work in the production kitchen through glass doors. It should open this month.

“We’ll be offering tours and classes once we get rolling,” she said.

The new Animas Chocolate Co. location and concept is one of many tasty changes happening in Durango’s restaurant scene in the coming weeks.

Take 11th Street Station. Fifth-generation Durangoan Marcos Wisner and his dad, Jaime, are converting a large space at 1101 Main Ave. (most recently home to the Durango Downtown Smoke Shop) into a sort of permanent food truck court anchored by a bar. Named Ernie’s after Ernie Schaaf, who owned the gas station that stood on the corner in the 1950s, the bar will feature mezcal and six cocktails on draft so customers can grab a quick drink to sip while they stand in line to order from one of the food trucks or carts. Then they can eat at one of the tables on the 5,000-square-foot property.

“It’s all about making drinks and making them fast and having a really cool, fun space for people to hang out at,” he said. “And we’re definitely going to have live music. The property just lends itself to it.”

The trucks will serve food until around midnight, and the bar will be open until 2 a.m., he said. Dining options include Indonesian dishes from Mariana’s Authentic Cuisine; sushi from Manny Fresco; sliders, soups and salads from Backcountry Gourmet; wood-fired pizzas from The Box; and tacos from Chingaderas. The station should open for business just before Halloween.

“We’re not just this hodgepodge of random trucks – it’s a food and beverage collective,” Wisner explained. “It’s a cool new product for Durango instead of just building some four-story condo on the property.”

Tad Brown and his wife, Vilma, co-owners of Fired Up Pizzeria, had a pizza cart in Moab that was so popular with cyclists from Durango that they decided to move here. In 2011, they opened Fired Up Pizzeria in the space now occupied by Rice Monkeys, then moved to 741 Main Ave., next door to the Open Shutter Gallery. When the photography gallery closed earlier this year (sob!), the Browns purchased the building and moved Fired Up into the larger space in September.

Instead of letting the lease on their former Fired Up location expire, the Browns are going to double down and open a new restaurant there called Mountain Taco and Tequila in November.

“If I see a street taco cart, I have a hard time not hitting the brakes. We really spent the last eight months diving into tacos – into different taco recipes in different regions of Mexico and different places around the States fusing these sorts of tacos,” Tad said, adding with a chuckle, “and tequila, for that matter – it’s been a fun eight months.”

Tad said if the restaurant succeeds, the next step is to become an employee-owned business. Some of the staff has worked at Fired up for five or six years, so he hopes they can open other Fired Up or Mountain Taco restaurants and benefit from profit sharing.

“If we can give people a future, that would be my ultimate goal. That’s my fantasy right now. Quite frankly, this used to be my fantasy, the restaurant that I’m standing in right now,” he said. “But to change a bunch of people’s lives and generations after that, that would be the coolest thing ever.”

Jimmy Nguyen, co-owner of Rice Monkeys, used to dream of working in the medical field. But during college in Florida he spent years “rolling sushi” and discovered his true passion. The popularity of Rice Monkeys, which opened at 1050 Main Ave. in 2012, showed him locals love fresh fish. So he’s opening the kind of restaurant where he’d like to hang out: Pop Sushi, an Izakaya-inspired restaurant. The grand opening is Fri., Oct. 6, at 42 Florida Road, Unit 400 (formerly home to Plate).

“Izakaya is basically an Asian tapas restaurant,” he said. “So it’s sushi, a lot of appetizers, and ramen. And a full bar! I basically created this concept for myself. I want to watch sports on TV and drink sake bombs at the bar, and with the urban, young vibe, you know?”

Instead of an early happy hour, Pop Sushi will host “Pop Hour” at 8 p.m. with discounted drinks and apps. The restaurant will serve food until around midnight on Saturdays.

“The whole intention is to cater to the locals,” Nguyen said. “I’m just trying to make it a fun place.”

Beto Navarro, owner of Macho’s and a former semi-pro soccer player, hopes to bring the local flair of his hometown of Guadalajara, Mexico, to his new restaurant Cantera, which will occupy 1150 Main Ave. (formerly The Lost Dog Bar & Lounge). Cantera is a volcanic quarry rock that offers a distinctive style to many buildings and fire-places in Guadalajara, he said. Decorations like blown glass chandeliers will also pay homage to his roots – as well as the food.

“When you ask somebody in the States what Mexican food is, they usually just say ‘tacos,’ or ‘burritos,’ or ‘enchiladas,’ things like that,” he said. “There’s much more than that. Down in Mexico where I’m from, we also have steaks, and lobster, and oysters, and seafood, and great dishes we don’t have up here. So that’s what we’re trying to introduce here: modern Mexican.”

He’ll do so with the help of Carlos Calderon, an award-winning chef who studied the culinary arts in Peru, Brazil and India and will create fusion dishes. Cantera will also offer guava, starfruit and other exotic fruits infused with liquor such as raicilla, an up-and-coming drink made from agave. (There will also be margaritas for traditionalists.) He’s shooting for a soft opening at the end of October, and a grand opening Nov. 9.

“We’ll have four different types of steaks – I think this town could use more steak houses, so we’re bringing some of that. At the same time, we know it’s a college town, so we don’t want to break people’s wallets,” he said. “Cantera will be affordable for all ages and for all different budgets.”

Fans of Mexican food have another restaurant opening to anticipate: Zia Taqueria should break ground this winter on a larger property one block south of its current North Main location. Owner Tim Turner purchased the property at 30th and Main to offer better parking, patio dining and a rooftop deck as well as a meeting room and space for holiday parties and fundraisers.

“I just see there’s a need in the community for a place to be able to gather,” Turner said. “That’s one of the bigger

reasons we moved: to be able to host and be more of a community gathering place for events.”

He said the new restaurant – Zia Cantina – will not have the “Subway line” that customers are used to at the two current locations. (Zia South will remain the same; Turner will continue to lease the current Zia North location and possibly create a fast-casual breakfast place there.) Instead, diners will place an order, then sit down while the team cooks the meal. When it’s ready, a food runner will bring it to the table.

“Those people will also be able to take a drink order if you’re like, ‘Hey, I want another margarita.’ With that model and a little bit more seating, it will be a more relaxed environment,” he said.

“I want to reinvest in the community that has supported us for the last 12 years,” he said.

Durango’s newest arrival to the restaurant scene is Charlie Shew, who graduated with an engineering degree from Fort Lewis College just last May. But he’s following his dream and opening Rendezvous Doughnuts at 139 East Fifth St. (formerly Fifth Street Eatery) later this month. His goal is for customers to linger in the shop while enjoying

coffee and “wholesome” doughnuts made with fresh, local ingredients.

“My first job when I was almost too young to legally work was as a doughnut baker at a startup mom-and-pop shop back in Atlanta, Ga., where I was born and raised,” he said. “Where I come from, doughnuts are a destination ... it’s about going to the shop with your family, or friends, or team, or party, or work group. That’s an experience I wanted to replicate when I came to Durango.”

Shew said he’s been “amazed” by the outpouring of support he’s received from owners of local businesses, such as Cream Bean Berry, Animas Chocolate and Bookcase & Barber.

“I wouldn’t be where I am now and moving along so quickly if I didn’t have their mentorship,” he said. “It speaks volumes for both the food culture in this town, and also the culture in general. People talk about Durango being a tourist town, but starting a business, I have dealt with locals and they have showed up in a huge way.” 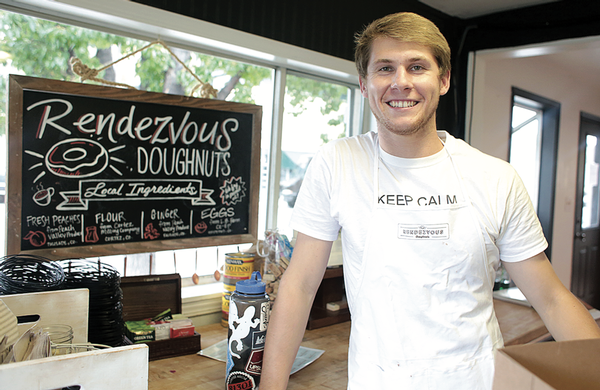 Charlie Shew, a recent graduate of Fort Lewis, is following his dream and opening Rendezvous Doughnuts at 139 E. Fifth St. later this month./Photo by Jennaye Derge