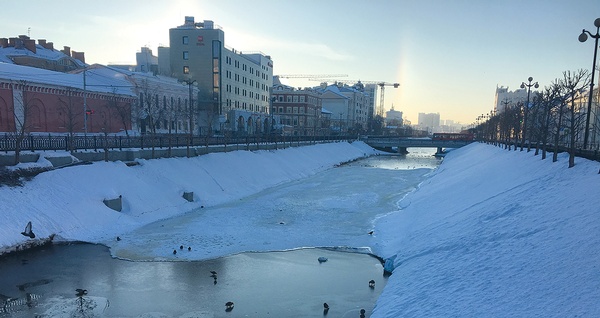 A snowbow seen early in the morning in Kazan, Russia./Photo by Heidi Steltzer

It’s a good thing Heidi Steltzer can’t tolerate the heat or the open ocean. “I thought I wanted to be a marine biologist, and I got seasick,” said Steltzer, a professor in the Biology Department and Environmental Science program at Fort Lewis College. “Then, I thought I wanted to be a tropical biologist and went to Costa Rica and my head stopped working because of the heat.”

Fortunately, in 1993, she found her happy place: the mountains. As an undergraduate at Duke University, she spent a summer studying at the Rocky Mountain Biology Laboratory in Gothic, outside Crested Butte.

“My physiology works better in cold places, and I came to Colorado and I loved it,” said Steltzer, who credits her cold-resiliency to her German/Swedish roots.

Little did she know this tiny ghost-town-turned-science-outpost at 9,500 feet would lead to bigger things. Much bigger.

This winter, Steltzer, who went on to get her PhD from the University of Colorado, was chosen to author a section of an upcoming special report from the Intergovernmental Panel on Climate Change (IPCC) – the United Nation’s body for assessing science related to climate change. The report, which will be published in September, is titled “The Ocean and Cryosphere in a Changing Climate,” and she is responsible for the ecosystem section on high mountain areas.

“These places that are far away, cold or vast, we don’t understand them well yet, and this is an effort to put that story together,” she said. “A focus of the report is on how less snow, retreating glaciers and thawing permafrost affect the water supply, hazards, ecosystems and communities in mountain regions and adjacent lowlands.”

Steltzer was nominated for the post when the previous author was unable to work for medical reasons. She said it has been a steep learning curve – but one that she has embraced.

“It’s still mind-blowing. I’ve never contributed to a major report before, and this is the major leagues,” she said. “But that doesn’t mean I don’t have the expertise.”

In addition to her work at the Gothic lab, Steltzer also has done extensive snow research in the San Juan Mountains, where she moved in 2009. She said she was drawn here not just for the aesthetics, but for the academic possibilities.

“These San Juan mountains are different from the mountains across the rest of the state, and they’re less studied,” she said. “I wanted to be near this unique place.” Since first coming to Colorado 26 years ago, Steltzer has seen changes in climate. “The mountains are different now. We have data that shows snowpack has declined in Colorado and in mountain regions around the world,” she said. “Air temperatures are warmer, and desert dust darkens mountain snow, leading to earlier melt.” Although there are still years with more snow (such as this one), many years, snow melts early, plants grow early and fewer plants bloom. “Mountain plants are running out of water, as are rivers, as are we,” she said.

In conjunction with the Center for Snow and Avalanche Studies in Silverton, in 2009, Steltzer published a first-of-its kind study on early snowmelt in Senator Beck Basin. Using landscape fabric draped over the snowpack, the study simulated earlier snowmelt and its effects on the ecosystem. It was a novel methodology at the time – up until then, snow was merely shoveled aside to mimic early snowmelt, but this method failed to emulate the melting of snow and the water’s ensuing journey.

“I study the hidden parts of mountain ecosystems that ensure everything else works well, the movement of water and availability of key nutrients,” she said.

Steltzer said often the mountains are overlooked when putting together the bigger picture of climate change because population centers tend to be located along coasts and rivers. However, the more sparsely-populated mountains are important as they often provide water for these larger cities.

“People who don’t live in or near mountains don’t see how significant the changes are and how impactful they can be for whole regions,” she said.

In March, Steltzer gathered for a week with other mountain scientists to write and discuss final revisions to the IPCC report. Fittingly, it was held in Kazan, Russia. Although it’s considered “southern Russia,” it lies at roughly the same latitude as Canada’s Hudson Bay.

She said it was apt that the final meeting about a report on the cryosphere (the frozen parts of the Earth for you non-bio majors) was held there. One day, she and some cohorts ventured out in search of the famed Volga River, which flows through the city. “All we saw was this white expanse; the entire river was frozen over, and the sky was white too,” she said (quipping that next time she would bring Yak Tracks.)

Growing up in the U.S. during the Cold War era, Steltzer said she never imagined going to Russia. Nevertheless, she found Kazan to be surprisingly cosmopolitan and said the trip – which was paid for by the federal government’s U.S. Global Change Research Program – was amazing, on an academic and global level.

“It is a really unique experience to be halfway around the world in a country I’d never think I’d go to, sitting next to people from Germany, Canada, Nepal, Japan, India, Ecuador, Italy and Russia,” she said.

Now back in decidedly less-cosmopolitan Durango, Steltzer is toiling away to finish her chapter. She said the bulk of her work entails pouring over peer-reviewed scientific studies to find – or not find – some kind of consensus on changes due to shifts in snow, glaciers and permafrost. She points out that climate change doesn’t just mean  warmer temperatures, but more erratic and severe weather events.

“There’s no doubt the climate is changing. In the future, there’s going to be greater uncertainty in what rainfall and snowfall is going to look like,” she said.

Steltzer, who has enlisted FLC students to help her scour the literature, said the point of the report is not to be “prescriptive,” i.e. provide actions, but to suggest options and alternatives based on science. “We can highlight natural adaptation and human adaptation options,” she said. “The idea is assessment.”

The report can also recommend further studies, such as Steltzer’s with the black fabric, to set a baseline and find commonalities across the world’s mountainous regions.

But most importantly, Steltzer’s mission is to tell a story using scientific data to engage and make something anyone can understand.

“There is so much out there, we have to try and tell a story,” she said. “It will have a greater impact if it links ideas in a new, novel way.”

She even added that the “story” has some elements of surprise – but to find out, you’ll have to wait until September. That’s when the report will officially be released in Monaco.

“We’re under embargo until then,” she said.

For the next several weeks, Steltzer will be burrowed away with her laptop; her section of the report is due in May. But she has a plan to help ease the pain of being cooped up during prime desert camping season.

“In classic Durango style, I set up my camper in the front yard,” she said. “Since I’m not going to be able to go camping, I’m going to at least work on the report sitting in my R-pod.”

Then, when her epic all-nighter of all-nighters is done, she’ll “rest and hike mountains and do all the fun things that we live in Durango for.”

And of course, she also will rest knowing she has scaled a mountain of a different sort. “It’s worth it to gain this knowledge and share what I learn, and a piece of it is identifying what we don’t know yet,” she said. “It’s about slowing the rate of change and having the future we want, not the one that we get because we didn’t know.”

To find out more on the IPCC report “Ocean and Cryosphere in a Changing Climate” visit: www.ipcc.ch/report/srocc/. 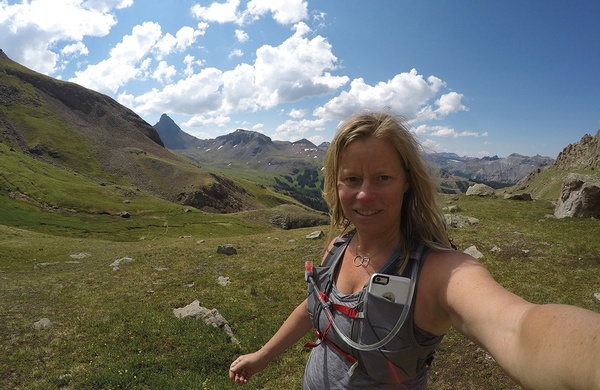 After a 2017-18 winter with little snow, Heidi Steltzer hiked trails in the northern San Juan Mountains in an effort to understand the impact. She said by early July, the area was uncharacteristically without any snowpack./Photo by Heidi Steltzer