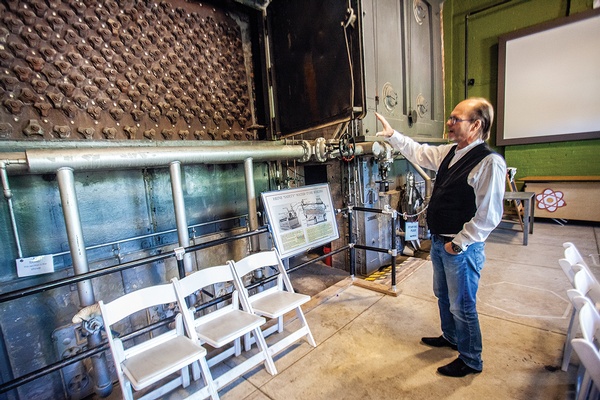 After a decade of surges and blackouts, the Powerhouse Science Center is buzzing again. Not only does the STEM (science, technology, engineering and math) center have a new director with a 30-year history in the biz (and some real- life experience with NASA), it’s also on terra firma financially.

“We’re in the best financial shape we’ve ever been in,” Powerhouse Board member Erica Max said Tuesday. “We’ve turned things around. We’re lean and mean.”

(Max, of course, is addressing the elephant in the room: the brief closure of the Powerhouse in May 2015 due to financial insolvency. The center re-opened four months later and has been slowly restructuring and developing new short- and long- term strategies ever since.)

“It took a lot of hard work. Our staff really went above and beyond, but we’ve moved past that in a big way,” she said. For starters, there’s the aforementioned new executive director, Wayne LaBar, the product of a national search last January. Max, who worked for an executive search firm, helped head up that, well, head hunt.

“We conducted a national search and were lucky enough to attract the best in the biz,” she said.

For his part, LaBar, who most recently lived in Connecticut, has a slew of lengthy degrees to his name, including one in aerospace engineering. In addition to his stint at NASA, he was the director of exhibits at the Tech Museum in San Jose, Calif., and vice president of exhibits at the Liberty Science Center, outside New York City. He also helped start science museums all over the world through his consulting business, Alchemy Studio. In other words, he knows his chops and electrons, protons and nanoparticles.

“I was looking to rejoin a community, it’s a little more fun and meaningful when you are working for a community,” he said.

Since taking the helm in April, LaBar has set about implementing what the center is calling the “Four Corners Transformation” campaign, which seeks to turn the center into a regional player. “We want to transform the museum into a more impactful and relevant science center for the region,” he said. The goal is not just to attract families and school kids as the center has done for years, but destination tourists as well. This will be done through new, upgraded exhibits – all with a regional slant.

“The focus will be on science technology that is uniquely part of the Four Corners and relevant to the community,” he said. This could include exhibits on everything from earth and space sciences to the area’s ecosystem, biomes, animals and plants, to mechanical sciences popular here (think skis and bikes for starters.)

“We want to feature the science behind what makes Durango tick, things that are part of our everyday lives,” he said.

Which isn’t to say there won’t be a continued nod to the past – and what a past it was. The historic Mission-style building, built in 1892, was originally home to the Durango Light and Power Co. It was one of the country’s first plants generating A/C (alternating current) power, which is still widely used today, meaning Durango was cutting edge way before ski lifts or mountain bikes were even invented. The power plant’s original boiler room is still intact, something LaBar envision showcasing on a grand level.

“We want to transform it into a theater where it comes alive during the day,” he said. “That’s what this place should be. We want a better interpretation of the history of the powerhouse and energy creation. We want to bring history alive.”

And speaking of bringing things alive, LaBar said a virtual reality exhibit is also in the works. It, along with other new exhibits, will be previewed at the “Powerfall Ball” from 6 – 10 p.m., Sat., Sept. 8, at the center.

“The ball will provide a sneak peek to these plans,” said LaBar. It will also raise vital funds for all these big plans, which is where you, the STEM-supporting public, comes in.

“There are a lot of works in progress at the moment,” said Max.

In addition to the sneak peek, the ball will also honor four “Powerhouse Makers” in the areas of individual, organization, philanthropist and student.

“These four are emblematic of the ‘can do’ maker attitude that has been part of living here since the first people moved into Mesa Verde,” he said.

The awards will be given in conjunction with the Durango MakerLab, which joined the Powerhouse in 2016. LaBar said the addition of the MakerLab played a big role in his decision to take the Powerhouse job.

“It’s a community of creative, industrial creators constantly changing and improving,” he said.

Folks can buy monthly or annual memberships to the MakerLab, which gains them access to all sorts of technological toys, from a 3-D printer and CNC router to industrial sewing machines. The lab is geared to attract not just basement tinkerers but the next big thing.

“If you are creating a start-up, we have equipment you could never afford that you can come in and use,” said Max. “We are creating businesses in town.”

In addition to all this, the center still hosts regular hours as well as toddler mornings, after-school activities, Thursday night trivia, science camps, Maker Mingle nights, corporate team-building retreats, a Kentucky Derby party – and pretty much anything else that powers the imagination.

“The Powerhouse is a huge educational resource that needs to be open,” said Max.

But if all that doesn’t convince you to turn out for the ball, perhaps the prospect of an electrical party, complete with dueling pianos, will. “Our event is way fun,” said Max. “It’s going to be the best party anywhere and support STEM education across the Four Corners.” 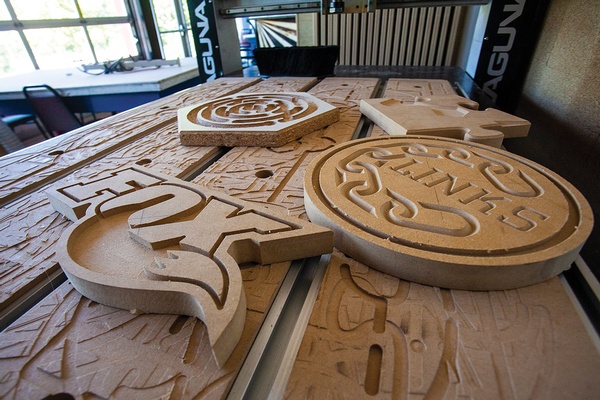 Just a few of the projects created on the Maker Labs' CNC router./Photo by Stephen Eginoire 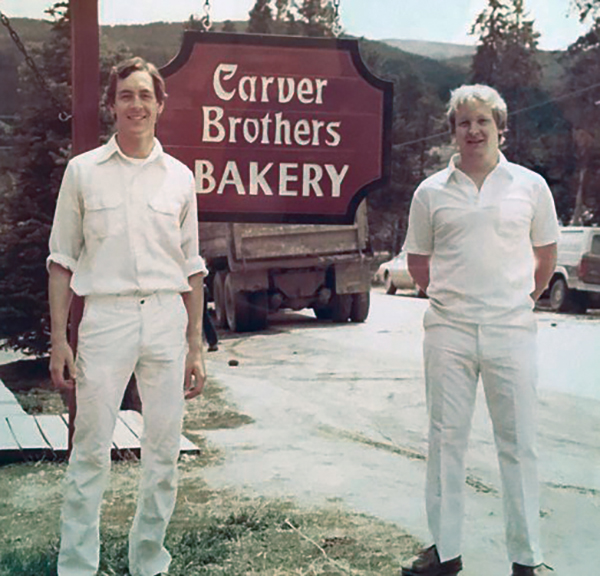 The Carver Brothers, back in their Win- ter Park days, circa 1983. (Above photo)

• 1892: Durango Light and Power Co. opens, one of the first A/C generating plants in the country

• Mid-1970s: Durango Powerhouse shuts down and falls into disrepair. At the same time, it is listed on the State and National registers of Historic Places and is named one of Colorado’s “Most Endangered Places.”

• 1998: Durango Children’s Museum, operating in the cramped upstairs of the Durango Arts Center, proposes converting the power plant into a science center.

• 2002: The City of Durango, which owns the power plant, approves plans to renovate the old plant. Grants for renovation and site cleanup, including asbestos removal, are secured.

As part of its first Powerfall Ball, the Powerhouse Science Center is starting another new tradition: The Powerhouse Maker Honorees. On Sat., Sept. 8, four honorees will be recognized for their ingenuity, perseverance and ability to innovate, succeed and survive in the fields of science, technology, engineering, math and education.

“These are individuals and organizations that lead by example and provide models for others in our community and in our world,” Powerhouse Director Wayne LaBar said.

This years’ honorees are:

1. Carver Brewing Co. – L. L. Nunn Honoree in Philanthropy. In 1988, Durango’s first brewpub since prohibition – and the second in the state – was established by brothers Jim and Bill Carver. Since then, Carvers, as locals call it, has been a leader in supporting the STEM education efforts of The Powerhouse through contributions and community fundraisers.Carver Brewing and the Carver family have donated more than $500,000 to The Powerhouse. In addition, Carvers is the main sponsor of the Search & Rescue Pancake Breakfast as well as many other community events and nonprofits in Durango.

2. Henry Haggart – The Caroline Romney Honoree for a Student or Child. A senior at Animas High School, Henry interns with the Fort Lewis College Engineering Department, races mountain bikes and tutors for Durango Academic Coaching. He also has interned at the Powerhouse for five years, putting in more than 400 unpaid hours. Outside of working at the science center, Henry is a member of Durango’s Team America Rocketry Challenge and Solar Car Challenge teams. Known as a “Jack of all trades,” he has an insatiable curiosity about all things: minerals, galaxies, fluid dynamics and the list goes on. Curiously, out of his many skills, the one thing he can’t do is tie a balloon.

3. Richard Rohrbacher – The Stuart Allen “Stu” Roosa Honoree for an Individual. The CEO at Rohrbacher Waterblasting Technologies and Colorado Wildfire Con-trol, Rohrbacher invented the system for removing rubber from airport runways, and dirt and grime from theme parks, while recycling all water used in the process. He holds nine U.S. patents and 14 international ones. As a child, he built rockets, race cars and machines out of scrap lumber and metal scrounged from his dad’s garage. Later, he channeled his inventive spirit into creating industrial equipment that included a soil sanitation system for the USDA and decontamination devices for nuclear plants.

4. Advanced Mobile Propulsion Test – The William Jackson Palmer Honoree for an Organization/Business. Founded in 2009, the prime mission of AMPT is to provide the expertise and infrastructure to test, evaluate and fabricate spacecraft propulsion systems, instrumentation design and implementation, altitude systems, and engine processing facilities.