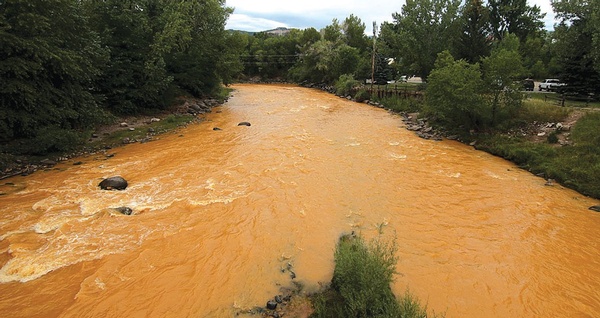 The Animas River as the orange plume from the Gold King Mine spill hit town Aug. 6, 2015 – a day that will live on in local infamy./ Courtesy photo

With the recent news that the Environmental Protection Agency agreed to pay New Mexico and the Navajo Nation more than $63 million for damages related to the Gold King Mine spill, some Coloradoans are asking: What about us?

“I just always question, should we have been louder, because holy smokes, that’s a lot of money,” La Plata County Commissioner Matt Salka said. “And it is concerning when $60 million-plus goes to communities at the end of the river, yet (Durango and Silverton) were the most heavily impacted.”

On Aug. 5, 2015, Southwest Colorado made national headlines when an EPA-contracted crew conducting remediation work at the Gold King Mine north of Silverton dug too far into a mound of debris at the mine’s entrance. The breach released more than 3 million gallons of water laced with heavy metals into the Animas River, which eventually reached the San Juan River and Lake Powell.

The immediate response was one of fear and chaos, as no one knew exactly what was in the water. Moreover, the river had turned a shocking, acidic Kool-aid orange. The river was shut down to recreationists, water taps were closed off and irrigation fields went dry. Slowly but surely, however, it became clear that while the spill was a jarring sight, it did not have lasting environmental impacts on the waterway. Just 10 days later, the EPA?declared the river was  back to pre-spill conditions.

However, the legal frenzy was just getting started. After the plume passed by, the communities closest to the headwaters – Silverton and Durango – decided not to pursue litigation against the EPA. Instead, they chose to push for the cleanup of mines that pock the mountains around Silverton and have degraded water quality in the Animas River since the heydey of mining in the late 1800s, early 1900s. And indeed, in fall 2016, a collection of historic mines in the area, including the Gold King, received a Superfund designation with widespread local support.

Downstream communities in New Mexico and on the Navajo Nation, however, went a different route. New Mexico sued the EPA in May 2016, with the Navajo Nation following suit a few months later. The $63 million settlement, announced in June, is now under question by upriver elected officials.

“Those are funds I would have liked to see go to the actual source of the issue,” Salka said. “We should be addressing the Superfund site, making sure water quality is good and preventing another mine blowout.”

From the beginning, the reaction to the Gold King Mine spill was vastly different in Durango and Silverton compared to New Mexico and the Navajo Nation. In Southwest Colorado, the issue of inactive mines leaching heavy metals into the Animas River has been well-studied and the focus of cleanup for decades.

While the sheer sight of the spill alarmed even the most involved members of groups such as the Animas River Stakeholders Group (a now-defunct organization of volunteers dedicated to protecting the health of the river), the fact that a mine blew out near Silverton wasn’t a shock. It has happened many times over the years. Looking at the long view: roughly 5.4 million gallons of acid mine drainage leaches into the Animas each day, compared to 3 million in the one-time Gold King blowout.

The spill, however, was the catalyst that finally secured a Superfund designation for the mines draining around Silverton. In the past, some community members objected that a Superfund declaration carried a stigma that would imperil the town’s tourism economy and destroy any possibility of reviving the local mining industry.

But after the Gold King blowout drew national attention, there was no stopping the momentum, and the Bonita Peak Superfund site was established. It’s composed of 48 historic mining sites around Silverton that are the biggest culprits of metal loading.

“We wanted to address the bigger issue and fix our entire watershed as opposed to taking advantage of the situation and making wild claims about damages and filing a lawsuit,” Dean Brookie, who was mayor of Durango at the time, said.

Julie Westendorff, a La Plata County commissioner also at the time, said if not for the spill, it was unlikely a Superfund site would have ever been declared. Seven years later, she feels “100% confident” the right decision was made to forgo a costly and time intensive lawsuit.

“(The spill) was a major blow to our community, no doubt about it, but the silver lining is a Superfund was created,” Westendorff said. “Having the problem addressed is the best bang for the buck we could have done, and we’re fortunate we were successful.”

Anthony Edwards, San Juan County (CO) liaison to the EPA, said a lawsuit could have delayed serious cleanup efforts for years. “This is a positive outcome when you don’t know what would have happened if litigation took place,” he said. “Time will tell, but we’re hoping we will move toward meaningful activity in the watershed.”

To win a lawsuit, of course, a party has to prove damages. While the sight of the spill was certainly unsettling, there wasn’t any die-off of aquatic life or long-term health or environmental impacts. Hence, many Southwest Colorado officials question what damages New Mexico, namely Farmington and San Juan County (NM), suffered to justify a more than $30 million payout.

“For New Mexico, I don’t know how they could have proved (damages),” Westendorff, an attorney and former judge, said. “There was quite a bit of politics in who sued and who didn’t sue, to be frank.”

On June 16, the day the settlement was announced, New Mexico Gov. Michelle Lujan Grisham said the blowout destroyed farmers’ crops, shut off water headgates and impacted tourism. New Mexico Attorney General Hector Balderas added the state knew it would have to “get in a fistfight” with the EPA to recover damages.

“While the San Juan and Animas rivers have healed from the spill, it’s time for communities like Farmington, Bloomfield and Aztec to do the same,” Lujan Grisham said. “This is an economic development boom (sic) for this entire community.” Most of the settlement money will go to San Juan County (NM) for outdoor recreation, and proposals for projects could start as early as August, Lujan Grisham said.

“How does (outdoor recreation) help the water quality?” Salka questioned.

It should be noted New Mexico also reached an $11 million settlement with Sunnyside Gold, the last operating mining company in Silverton, and is still pursuing a lawsuit against the EPA’s contractor.

On the Navajo Nation, a different case was made about the Gold King Mine spill. From a Native American cultural perspective, waters are sacred, and the disturbing sight of a bright orange San Juan River had a traumatic impact on tribal members (not to mention the history of environmental injustice on tribes throughout North America). According to media reports, some farmers on the Navajo Nation refused to use San Juan River water for years after the spill.

In a prepared statement at the time the settlement was announced in June, Navajo Nation President Jonathan Nez said that when the spill occurred, the tribe went to the Gold King Mine site and saw firsthand the environmental impacts to the land and water.

“I am thankful that the Biden-Harris administration acknowledges the devastation that it caused and took the steps necessary to reach this settlement,” Nez said (though the spill happened during the Obama administration). “This important settlement reflects the EPA’s recognition of the suffering it caused the Navajo Nation and our people.”

The Navajo Nation’s statement did not specify how the settlement money would be spent.

(As an aside, Utah filed the largest claim at a whopping $1.9 billion. Utah later agreed to drop its lawsuit in exchange for $220 million dedicated to the Bonita Peak Superfund cleanup as well as other mine sites located in Utah.)

That’s not to say Silverton and Durango were shorted. Both governments received some reimbursement for dealing with the spill itself. The EPA built a $1 million water treatment plant that continues to operate at a cost to the EPA of $2.5 million a year. And, the agency has spent about $100 million to date on the Superfund site and expects to spend significantly more in the coming years.

“The EPA continues to focus on the completion of site activities that will benefit downstream Colorado communities and the watershed,” EPA Spokesman Alfred Basile said. “Recent cleanup work, including efforts to stabilize mine waste and reduce contaminant releases to surface waters from source areas, have improved environmental conditions and will inform the development of future cleanup remedies for the entire site.”

“The concern why downstream communities are getting so much money ... is a valid concern I’d have if I were you as well,” she told commissioners during a board discussion session. “But we’re trying to spend money we have to improve water quality. And we hope the settlements allow (New Mexico and the Navajo Nation) to do similar things on their lands.”

Seven years in, the Bonita Peak Superfund site has only slightly improved water quality in the Animas as the EPA continues to research the problem on the ground and come up with the best solution. Peter Butler, a co-founder of the Animas River Stakeholders Group, said he believes that now that the EPA has settled the lawsuits, the agency will ramp up cleanup efforts.

“Now that it’s settled, hopefully the EPA can talk more openly about their plans,” Butler said. “I don’t think people regret (going the non-litigation route), but there is a fairness issue. We didn’t file a suit and didn’t get anything. And they got a pretty good settlement.”

Since the Gold King Mine spill happened, a lot of money has been exchanged (and not exchanged: the EPA, for instance, denied liability for $1.2 billion in private damages, such as rafting companies that took a hit during the river closure, lost wages for the tourism sector and alleged damage to crops and livestock). EPA’s Basile added a separate lawsuit settlement will have Sunnyside Gold pay $41 million to the federal government and $4 million to Colorado, all to be used on top of the federal government’s $45 million for the Bonita Peak site.

When The Durango Telegraph contacted the Colorado Attorney General’s Office this week to ask why the state decided not to pursue litigation against the EPA, Lawrence Pacheco, spokesman for the office, wrote in an emailed response: “The Colorado Department of Law is currently in negotiations with the federal government regarding natural resources damages related to releases from the Bonita Peak Mining District.” Pacheco declined to comment further.

At the end of the day, however, local officials say the best payout of all would be improved water quality in the Animas River watershed. Yet, Brookie said it does sting to see the dollar amount going to a New Mexico community that may not necessarily have a case for claiming they were impacted by the Gold King Mine spill.

“With New Mexico, it’s upsetting, because they just wanted to take advantage. What’s that saying? ‘Never let a good crisis go to waste,’” Brookie said. “But we saw (the spill) as a bigger problem rather than a single community victimized. We just wanted to get on with the cleanup.”