A terrible, horrible, no good, very bad year
From coronavirus to economic downturn to wildfires, 2020 puts Polis to the test 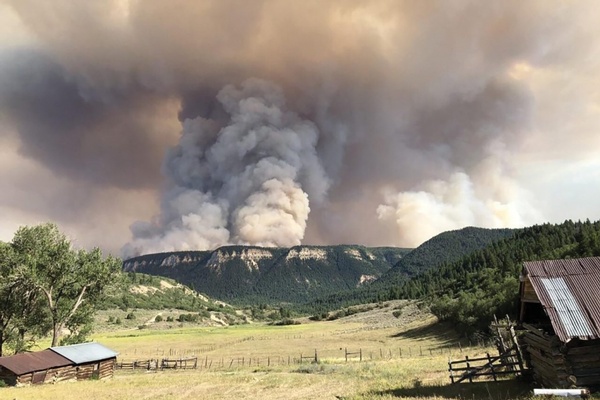 The Pine Gulch Fire north of Grand Junction billows atop a ridgeline on Tues., Aug. 18. That same day, Gov. Polis enacted a statewide fire ban for 30 days. As of Wednesday, the Pine Gulch Fire was at 125,000 acres and closing in fast on the Hayman Fire for the dubious honor of the largest in state history./Photo courtesy Inciweb

by John Dale / Colorado Public Radio News - 08/20/2020
Gov. Jared Polis’ 2020 started with the arrival of the novel coronavirus in March, followed by an economic crisis caused by the pandemic. And now, the state’s worst wildfire season in years, compounding the challenges unleashed by the first two.
Bad things come in threes.
In a news conference Tuesday, the fires got most of the attention. Polis issued a temporary statewide open fire ban, barring campfires and fireworks.
“The hot, dry weather is making fire behavior extreme, rapid spread, already taxing our resources to fight fires,” he said. “We need to do everything we can to prevent new fires from starting in the first place.”
He said the ban doesn’t include home barbecues, public grills, camp stoves and approved covered fire pits.
The ban will have a limited impact for most Coloradans. Only three West Slope counties didn’t already have their own bans in place, including La Plata, which lifted fire restrictions Aug. 4. On Wednesday, the San Juan National Forest announced Stage 1 fire restrictions starting Aug. 20.
The statewide ban will be in effect for 30 days, as Colorado faces hot, dry weather with no relief in sight.
When asked if the ban would include shooting on public lands, Stan Hilkey, the executive director of Colorado's Department of Public Safety, said he didn’t think it would, but added that the language was still being drafted.
“I think the real relevant point is that we want people to take the fire ban seriously,” he said.
There are four major fires now burning in the state, and Polis said three of them were likely caused by humans, with the largest, the Pine Gulch Fire north of Grand Junction, the result of a lightning strike.
The Williams Fork Fire north of Silverthorne is considered human-caused because there was no indication of lightning in the area when the fire started. Two blazes, the Grizzly Creek and the Cameron Peak fires, are still under investigation. However, the former appears to have been caused by sparks from a vehicle, “something dragging on the interstate,” the governor said. There was also no sign of lightning near the start of the Cameron Peak blaze.
Hilkey said that the state has spent $10.5 million on fire suppression costs so far in 2020. Wildland firefighters, including Colorado Department of Natural Resources executive director Dan Gibbs, who also appeared with Polis on Tuesday, have focused on protecting lives and property while the fires burn primarily in remote terrain.
Meantime, the governor had better news to discuss on the COVID-19 front, with the state recording some of its lowest figures for positivity rates – which track positive results per number of tests taken – since the pandemic began in March. He credited the state’s residents for following public health guidelines, including the mask order introduced last month.
“That is a direct result of you wearing masks in public, of you avoiding large gatherings, staying home when you can,” Polis said. “And that's especially welcome news as kids return to school across our state.”
The positivity rate, as measured over three days to smooth out peaks and valleys alike, has fallen below 3 percent. That's a fraction of the rates in states like Arizona, Texas, Florida and Georgia, which have struggled to contain the spread of the highly contagious virus. Colorado’s case counts are about a quarter of those in Arizona.
“Overall, 10 of the last 14 days, we've had a downward trend (in key COVID-19 measures),” the governor said. He called the crisis the “greatest pandemic in a century.”
When asked whether the state could expect to continue with low positivity numbers, epidemiologist Dr. Alexis Burakoff said it’s difficult to predict.
“It's really too hard to guess what the impact of things like school openings might have on our numbers. We think that the guidance that we've released is going to make school as safe as possible,” Burakoff said. “So certainly, my hope is that that wouldn't be a huge driver, but it’s too hard to say what will happen.”
The governor was asked if the state should consider lifting some restrictions – for example, the 10 p.m. deadline for last call at bars and restaurants or the indoor visitation rules at nursing homes. He said nursing home rules were being revisited and new guidelines would be coming in “the next few days.”
But with his order on last call set to expire soon, the governor expressed skepticism about loosening that rule. “We know that we can’t return to normal like so many things in life,” Polis said.
A late-night social environment, especially one where people are inebriated, “provides an ideal environment for the virus to spread,” he said.
Polis was hopeful the state could make progress with the lower virus numbers it was seeing, but he said Colorado was still a ways away from "normal."
“We're nowhere near a situation where we can return to living the way we did last year without giving the virus the opportunity to expand exponentially in our state, and destroying our economy and costing thousands of lives," he said.
For more from Colorado Public Radio, go to www.cpr.org.