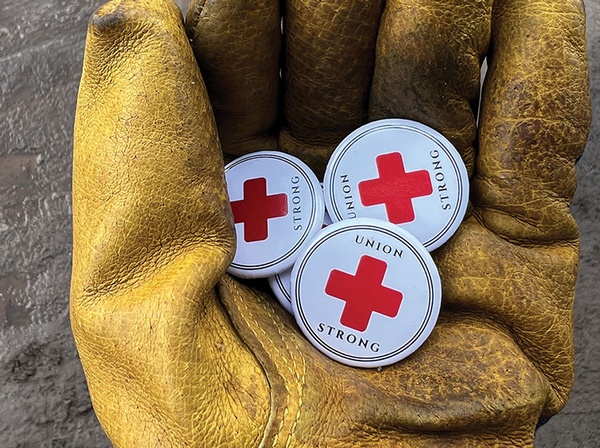 With increasing cost of living and stagnating wages, Purgatory Ski Patrol is following suit with many other rescue teams across the West in an attempt to unionize. The hope, ski patrollers say, is to then begin negotiations with the resort./ Photo by Missy Votel

Ski patrollers at Purgatory Resort appear set to join the growing ranks of rescue teams across the West in establishing a union to collectively push for better wages, compensation and benefits.

After years of discussion, Purgatory Ski Patrol sent out ballots to about 50 of its members to vote on whether or not to unionize. Though the majority of ballots have been turned in, an official decision won’t be announced until sometime in April.

However, Jason Moore, a ski patroller at Purgatory, said an informal poll of the team before ballots went out found that about 90% of members favor unionizing, an encouraging sign the move for a unified voice is on the right track.

“Right out of the gate, we had pretty high support,” he said. “We thought it would be worth organizing and giving ourselves a better opportunity for a collective voice.”

Unionizing discussions at Purgatory, as well as at ski resorts across the West, have taken place for years, though in most cases failed to gain momentum. But the past two years, specifically, have seen a tipping point for patrollers who say their work is underpaid and underfunded.

At Purgatory, for instance, the starting wage for a ski patroller is just $13 an hour (minimum wage in the state is $12.56), which has led to high turnover rates. And, several members interviewed for this story said the department – whose tasks include emergency rescue, medical calls and avalanche mitigation, to name a few – is chronically under budget.

“The reason we do this job is because we love it,” Bob Rydiger, who has worked for Purgatory Ski Patrol for 40 years, said. “But we’ve noticed the prices going up for everything, and our wages haven’t been following that bottom line. We’d like to be better compensated.”

In February, Purgatory Ski Patrol notified Mountain Capital Partners, the entity that owns and operates the resort, that it was going to hold a formal vote on whether to unionize. This move, it appears, was the culmination of years of longstanding issues and frustration over funding.

One of the obvious issues, Moore said, is that the starting wage is $13 an hour for a position that requires a number of medical certifications and emergency training requirements. Other ski mountains, like Vail and Aspen, have recently raised initial wages to $20-$21 an hour. Purgatory ski patrollers don’t have a set starting wage in mind at the moment, but will come to a number in line with other resorts, Moore said, likely during negotiations.

Ski patrollers also seek an increase in gear stipends. This year, for the first time, Purgatory gave members a stipend for gear (that price was not disclosed). But given that ski patrollers, usually out on the slopes 100 days a season, supply their own skis or snowboards, boots, helmets and other equipment, this money goes quickly and is not nearly enough, patrollers say.

And, the department’s chronic underfunding on equipment like ropes, snowmobiles, drills and tools needs to be addressed, Rydiger said. Several ski patrollers also noted that Purgatory’s radio system – a pretty important tool for emergencies on the mountain – barely works.

“Our radio system was pretty hit or miss this year,” Rydiger said.

All of these issues have led to rampant ski patrol turnover. The team had to replace 14 new patrollers in 2020, and 10 new members in 2022. That amounts to almost 50% turnover in the past two years, with many leaving for jobs with Mercy Hospital or Durango Fire Protection District that offer better pay and benefits. New or less experienced patrollers, of course, lead to more safety concerns and more time spent on training.

“It takes a couple years to grow a patroller to where they are a solid, real-world experienced patroller,” Moore said. “I know for a fact we could keep a lot more people with better wages and benefits.”

Ironically, the influx of new patrollers, some from resorts that have unionized and seen success, is what helped build momentum at Purgatory. Add on the fact that the cost of living in Durango and La Plata County has skyrocketed over the past two years, and the situation reached a breaking point.

Put simply: the long-held stereotype that patrollers are ski bums who do it for powder days on the mountain, not the pay, just wasn’t cutting it anymore.

“Most of our team would do whatever they could to make ends meet and still do this job, because they love it,” Moore said. “But we lose so many people, because (our wages) can’t compete, and it’s just not financially viable for them.”

Unionizing, ski patrollers said, will give the team a unified voice for negotiating. Rydiger said ski patrol isn’t a year-round career, but increased benefits and incentives will help grow members within the patrol and keep them on board year over year.

“Way back in the day, we had little turnover, and everyone came back in the winter,” Rydiger said. “But now, it’s harder for younger people to stick around.”

Purgatory, through Mountain Capital Partners (co-owned by James Coleman, who took over in 2015), sets the budget for ski patrol. Resort officials said they were unable to speak about this story, given legalities. A labor union acts as an intermediary between employees and the business that employs them, through collective bargaining. Typically, companies oppose the unionization of workers.

Dave Rathbun, general manager of Purgatory, did, however, provide a written statement that said “this effort came as a complete surprise to me and our management team, as we have always worked hard to maintain a positive working relationship with all our employees and have invested significantly in our ski patrollers and their department resources.”

“Nonetheless, someone or something has persuaded our ski patrollers that a union can negotiate better terms and conditions of employment for them than they could have gotten for themselves, had they approached their manager, Human Resources or me directly,” Rathbun wrote. “We are understandably disappointed by this turn of events, but again, we recognize our employees’ right to bargain collectively and will respect the results of the election.”

Blayne Woods, director of Purgatory Ski Patrol (who is not eligible to vote), did not return a call seeking comment.

If you’ve kept up with the news in the past two years, you know Purgatory is not alone in its attempt to unionize. Ski patrollers across the West are fed up with low wages and benefits and are demanding fair compensation, especially given high costs of living in mountain towns.

According to the U.S. Bureau of Labor Statistics, ski patrollers make an average of $13 an hour, which ranks in the bottom 3% of wages nationally (other medical jobs pay nearly $18 an hour). Many believe this is far too low given the danger, hardships and responsibilities of the job.

Previously, only select resorts had unions – Crested Butte, Park City, Steamboat and Telluride, all of which boast higher wages and better benefits. But in recent years, several other ski areas started the push, with both Breckenridge and Big Sky unionizing this year. Keystone, however, fell short last year in a 42-36 vote.

Notably, ski patrollers at Park City threatened to strike this January if conditions were not improved. Ultimately, Vail Resorts (which owns Park City) raised the team’s wages to $19 an hour, along with other benefits.

“The business model needs to change in the ski industry, and unionization is the way to do that,” Joe Naunchik, a Park City ski patroller, told The Colorado Sun. “Unions are the best chance we have for making this a career and not being treated like a second-class seasonal employee. I think the momentum is swinging back our way. People are tired of being exploited.”

Requests for comment to the United Professional Ski Patrols of America/Communications Workers for America, which manages unions for patrol teams, were not returned.

A day in the life

These calls to unionize come at a time when visitation at ski mountains is exploding. At Purgatory, the resort is on track this season to be 12% above the average annual visitors from 2015-20 (though those years included the severe drought year of 2017-18 and the COVID-19 pandemic year 2019-20).

On a typical day, about 15 patrollers are responsible for covering the entire mountain. A 10-hour shift requires team members to check for hazards before opening around 8 a.m. Then, they are responsible for not only injuries, but situations ranging from drug overdoses to people falling in parking lot and fights in the lift line. At the end of the day, they’re back on the mountain for a final sweep to make sure everyone is down safely.

Ski patrollers said they were not authorized to provide the specific number of rescues on a typical day, but it’s in the double digits. During holidays, which can bring 5,400 visitors a day, the amount of calls can significantly increase.

“We are a catch-all as far as dealing with the public,” Rydiger said. “People come out here to vacation and they want the best and safest experience, and we want that for them. And we believe we should be fairly compensated for that work.”

Once all the votes are in later in April, the National Labors Relation Board (which did not return requests for comment) will count the votes. If members vote yes, Purgatory Ski Patrol becomes a union and then intends to start negotiations with the resort. If votes come back no, the patrol team is back to square one.

But with an informal vote showing 90% supporting unionization, Moore said it’s likely a unified front is on the way. While a few members were concerned that if they attempted to unionize, Purgatory could retaliate or replace them with volunteers, Moore said those fears were quelled once they heard support from other emergency personnel in the community.

“We all believe the local community appreciates what we do and wouldn’t volunteer to work our jobs for free and put 49 people out of work,” Moore said.

More than anything, Purgatory Ski Patrol is adamant on improving conditions for its staff, while at the same time, keeping good relations with resort management.

“We’ve emphasized we don’t want this to be an adversarial thing; we want a tight-knit, collaborative relationship,” Moore said. “And I really think the union construct will give us the ability to be heard a little more and be pushed up the priority chain when we ask for certain things.”