All ears
Monument scoping this week in Utah 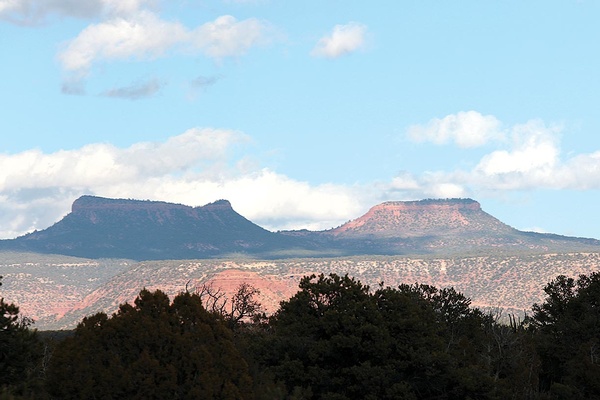 The BLM is holding public scoping meetings this week in Bluff and Blanding, Utah, for the two smaller monuments meant to replace Bears Ears: Shash Jaa and Indian Creek. Meetings will also be held in Kanab and Escalante for the three smaller monuments carved from Grand Staircase Escalante./Photo by Jennaye Derge

Here’s one more reason to head to the desert over spring break next week – the BLM has announced it will be holding public scoping meetings on southern Utah’s two newly shrunken national monuments. But you better hurry. There will only be four meetings – two for Bear’s Ears and two for Grand Staircase Escalante.
The BLM is developing two new environmental impact statements for the downsized Bears’ Ears, which is being divvied up into the so-called Indian Creek unit to the north and Shash Jaa, Navajo for “Bears Ears,” to the south.
Three new EIS’ are being drawn up for the GSENM, which will now be parceled into three smaller monuments – Grand Staircase, Escalante and Kaiparowits Plateau. A separate EIS will also be drawn up for the areas removed from the original monument and not included in the new monument boundaries.

The meetings will take place at the following times and locations:

“The public is encouraged to help identify any issues, management questions or concerns that should be addressed in the planning processes,” read a statement from the BLM. “The comments will be used to help set the parameters, or scope, of the review of the land use plans. The public scoping meetings provide the public an opportunity to talk to resource specialists and submit written comments in person.”

The meetings are taking place despite lawsuits to stop the re-drawing of the monuments’ boundaries by various tribes and environmental organizations. Opponents are also decrying the lack of opportunity for public input –15 meetings were held in seven states for GSENM whereas Bears Ears entailed a months-long collaborative effort between tribes, government leaders and non-tribal entities.

Among the 1.15 million acres removed from Bears Ears are Cedar Mesa, Dark Canyon, Elk Ridge, Mancos Mesa and Valley of the Gods. Those areas will revert to being managed under resource management plans for the BLM Monticello Field Office and Manti-La Sal National Forest

Lands removed from the GSENM include hundreds of miles of roads that were previously closed to motorized use, as well as rich coal and oil deposits and major dinosaur discoveries.

• Comments for Bears Ears can also be made directly through: the BLM’s ePlanning page at https://goo.gl/uLrEae; mailed to P.O. Box 7 Monticello, UT 84535; or emailed to blm_ut_monticello_ monuments@blm.gov. Comments must be received by April 11.

• Comments on the GSENM can be submitted through the project ePlanning page at https://goo.gl/EHvhbc; mailed to 669 S Hwy 89A Kanab, UT 84741; or emailed to BLM_UT_CCD_monuments@blm.gov. Comments for GSENM must be received by April 13.