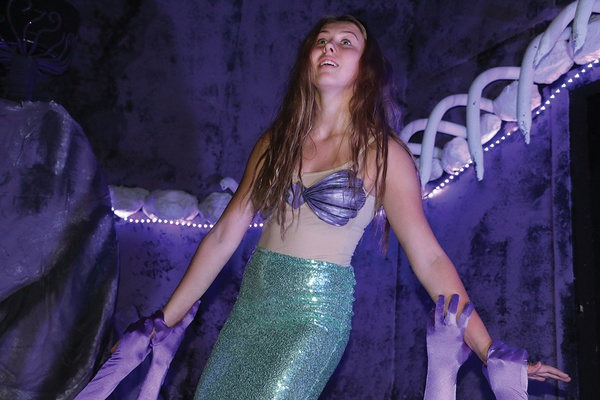 Anna Fenberg, aka Ariel, rehearses a scene from DHS Troupe 1096's rendition of "The Little Mermaid." The musical, the timing of which was purely coincidental to the re-boot of the Disney classic, opens Nov. 8 and runs for three weekends at the high school./Photo by Isabelle Herringer

Durango has long housed an impressive theatrical community, especially considering how it stacks up against the scenes in much larger towns. Now, the recognition is official: the Durango City Council will designate November as Durango Theater Month, in honor of the many productions taking place in the next few weeks.

“It underscores the spirit of cooperation that we are all very dedicated to,” Mona Wood-Patterson, director of the Merely Players’ upcoming show, “Every Brilliant Thing,” said. “Durango has a vibrant theater scene, and it’s important to our community.

The plays have overlapping runs, due to the reality of school schedules and holidays. But instead of bemoaning the scheduling conflicts or competing with one another, these three directors decided to collaborate to promote theater across the region.

“We are three separate companies, but we all have a similar and common spirit behind our missions,” Carson said. “We are all interconnected. We are all part of one community. We have to look at theater and the arts as a whole in our community. It just makes me happy that people are out there seeing theater.”

The directors recognize this special opportunity for theatergoers. Not only are the three plays so distinct in style and tone – “The Little Mermaid” is a stage version of the Disney classic; “Every Brilliant Thing” is a one-woman show in a found space; and “Gypsy” is an ensemble musical production – but having them staged simultaneously is actually a boon rather than a detriment. Locals and visitors alike can choose to make a long weekend out of going to the theater or plan ahead to catch all three shows throughout the month.

Even if people just choose one production to visit, the cross-promotional movement is worth it to these directors. “If someone goes to see another show, that energy starts spreading,” Carson said. “That means in the future, more theaters, more shows, more people will continue to go. By seeing any of our shows, that energy will continue to spread. And that benefits all of us.”

So in that spirit, let’s take a look at the marquee for Durango Theater Month, which begins in earnest Fri., Nov. 8.

The 1959 play set in the burlesque world of the ’20s and ’30s is often recognized as the greatest American musical. Based very loosely on the memoirs of striptease artist Gypsy Rose Lee, the production features such now-standard numbers as “Everything’s Coming Up Roses.”

“It’s a musical with a complex, nuanced story,” Carson said. “The characters are rich and compelling and colorful. It’s very story-and plot-driven.”

However, “Gypsy” is tricky for a college production, because it asks for cast members of all ages. Rather than evade these difficulties, Carson welcomed the chance to open the curtains for collaboration with the Drango community. In addition to college actors, the 34-person cast features 14 children, six adult community members, and FLC staff and alumni.

Having such an inclusive cast makes this production particularly special for Carson. The FLC Theater Department strives to stage such community-centric productions periodically and having this one align with Theater Month just adds icing to the cake.

Plus, theater buffs may know that the role of Mama Rose, the iconic “stage mother,” was once played by Angela Lansbury – who will have a special message for attendees of the Gypsy Gala, the Theater Department’s fundraising event Mon., Nov. 11.

If there’s an antithesis to the ensemble numbers of “Gypsy,” this is it: playwright Duncan Macmillan wrote this play for one person of any age, ethnicity or gender to perform on a minimal stage.

To play the narrator, Wood-Patterson cast local favorite Sarah Syverson, who has written and starred in multiple one-woman shows of her own. Merely Players is well-known for staging plays in found spaces – that is, in nontraditional settings – and this

one will be held at Hesperus Camp, with one special performance at the Sunflower Theater in Cortez.

“The joy of this play is that it’s witty and fun and unexpected and very real,” said Wood-Patterson. “It’s about a woman who, when she’s 7 years old, her mother attempts suicide. And then her mother does that several times over her life. So to deal with it, this child begins to make a list of everything that’s wonderful in the world.”

A joyful play about suicide – yes, it’s true. The play is filled with hope, Wood-Patterson says, and she and Syverson are taking the opportunity to promote suicide awareness, especially considering that the suicide rate in La Plata County is double the national rate.

Mental health counselor Janet Curry will be on hand after every performance for talkbacks, should anybody wish to discuss the topic of suicide further, and she is also a liaison to numerous mental health organizations and crisis lines.

“This one is just right for our community at this time,” Wood-Patterson said. “It’s an exquisite piece of theater.”

Swinging the pendulum in a different direction, Durango High School Troupe 1096 is producing the stage version of “The Little Mermaid,” the Disney Renaissance story of Ariel’s deal with the devil – ditching her tail and voice for land legs and a shot at Prince Eric.

The plays at DHS are chosen by a board of seniors and director Ben Mattson, and they did not know about the forthcoming Disney live action film when they chose this play. “We seem to be on the cusp of that movement,” Mattson said. “We wanted to do something that played to a wide audience and that families could come to enjoy.”

The story is likely familiar to many theatergoers already, but the stage production takes the time to add depth to the characters and their relationships. Ursula the sea witch’s backstory is more flushed out, for example, and the relationship between Ariel and her father emphasizes the mer-dad’s struggle to understand that he must let go so his daughter can be happy.

Mattson said that he has an ambitious group of seniors on stage this fall, as well as underclassmen with fire and drive, so he feels confident in his troupe’s ambitious production. “We’re all pretty exhausted,” he said, “but really excited, too.

With options like these, casual theatergoers and seasoned theater buffs can only choose right. One play or three? Whatever they choose, they’ll be contributing to the universal yet one-of-a-kind experience of sharing in a live  performance with their wider community.

“It’s becoming rarer that people agree to sit in the same space,” Mattson said. “There’s something magical about it. Some people say that theater is on its way out with all these advancements in how people get entertainment. But I don’t think it will ever go away. People will always want to be in the same room at the same time. It builds something that nothing else can really do in the same way.” 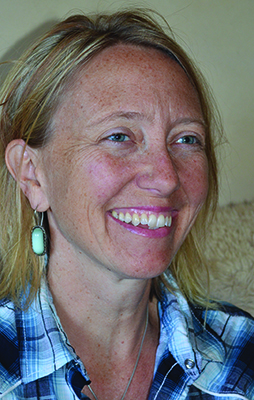 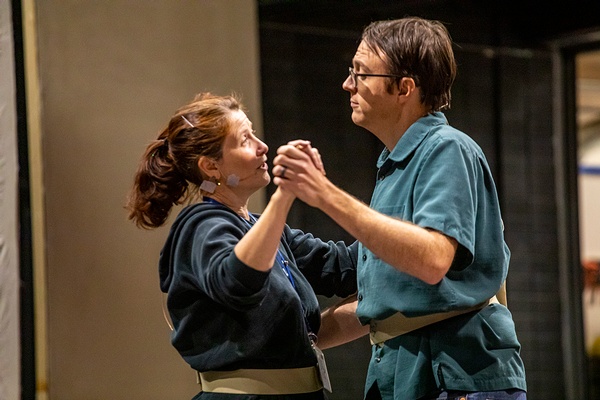 FLC alumni Jenny Fitts Reynolds, left, and Geoff Johnson rehearse a scene from FLC's upcoming production of "Gypsy." Since the play requires cast members of all ages, FLC Theater Director Theresa Carson opened it up to the community, including local kids and adults./ Photo by Stephen Eginoire