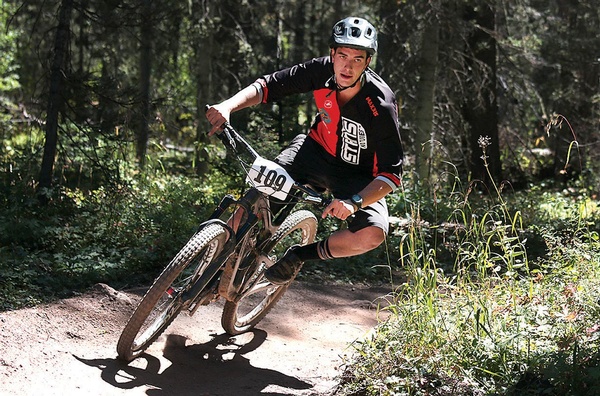 Purgatory's Divinity Flow Trail, pictured above, opened last year. The resort's trails, most of which are on public land, will be open to ebikes as part of a pilot Forest Service program./File photo

When the Forest Service released a final Environmental Assessment – basically the last step in the process – for its management plan of the Hermosa Creek Watershed, it included some unexpected items. Some were considered welcome and forward thinking, like trails for ebikes. Others, not so much – like seasonal closures on trails for mountain bikers.

One of the items in the final plan – initiated by the passage of the Hermosa Creek Watershed Protection Act three years ago – allows ebikes on 13 miles of Purgatory’s trail system, which is primarily on Forest Service land.

“We thought the Purgatory public trails would be the place to try (ebikes) out,” Cam Hooley, the project leader for the Hermosa Creek Watershed Management Plan, said.

Considered motorized vehicles by most state and federal regulators, ebikes are typically only allowed on trails where motorized travel is allowed. What the Forest Service did here is give them a special designation, putting them on the same playing field with mountain bikes. It’s a first for the San Juan National Forest.

In many ways, the thinking behind the move is to put other users on the same playing field. Many of Purgatory’s guests come from lower elevations and are not accustomed to the high-altitude terrain.

“The demographics of many of the ski area clients are such that they would benefit from pedal-assist bikes, because they are often from lower elevations, infrequent mountain bikers, and are either older or have young children,” the plan reads. “This would give the (Forest Service) an opportunity to evaluate a new technology and its impacts in a mostly self-contained trail system.”

Koesis said ebikes allow more people to get on bikes and get out on the mountain. And that’s a good thing. “If it’s opening (it up) to more people – putting more people on bikes – I’m all for it,” he added.

Next summer, Purgatory is likely to have some ebike demos and exhibition events, according to Koesis. If the resort decides to add ebikes to its fleet, it wouldn’t happen until 2019.

The ebikes are part of the EA’s proposed Alternative 2, which is the preferred alternative, in the management plan released in September. This will be the final plan, along with a couple additions taken from Alternative 3, related to the Cutthroat Trail and a bypass trail.

The Cutthroat Trail is an addition to the Purgatory trail system. It parallels the East Fork of Hermosa Creek, providing a beginner connector trail that runs from the ski area to the Hermosa Creek Trail. In Alternative 2, this trail was supposed to have limited ebike use. Instead, the Forest Service plans to allow ebikes the entire length of the trail.

The other addition is an off highway vehicle (OHV) bypass trail, which would start at the base of Purgatory and end at a staging area where Hermosa Park and Elbert Creek Road meet. The purpose of the bypass is to get OHVs off the Forest Service road, which is considered an unsafe situation. Also, under the final plan, OHV’s won’t be allowed on the first 3 miles of the Hermosa Park Forest Service Road so they would have to be trailered up to the staging area.

“(The bypass) would add an additional opportunity for those that do not want to trailer their OHVs the extra 3 miles and would also add an opportunity for motorized recreationalist to stop at Purgatory for lunch or other amenities,” the plan reads.

On the flipside of these changes are those that are considered by some to be not so welcoming or forward thinking, like the reclassification of mountain bikes and seasonal closures on trails.

In the plan, the Forest Service classified mountain bikes as mechanized vehicles – essentially clumping them together with motorized vehicles. This cuts them off from trails they thought would replace ones lost when a portion of the Hermosa Creek area was designated wilderness.

When the Hermosa Creek bill was being written, mountain bike advocates knew they would lose some access. They also knew that other trails would fill that void.

Mary Monroe Brown, director for Trails 2000, said there’s clearly a difference between mountain bikes and motorized vehicles. She wants mountain bikers to know their support of the wilderness was not in vain.

“The main thing is that Trails 2000 worked successfully and collaboratively on the entire process,” Monroe Brown explained. “The (Environmental Assessment) includes some things that were not in the spirit of the law.”

As a result, Trails 2000 plans to file an objection. Only individuals or groups who commented on earlier versions of the plan can object in these final stages, and those objections won’t be handled by the same Forest Service employees who were involved throughout the project. The Forest Service’s regional administrators take on that task.

Hooley said they’ll contact each objector – of which there were a few – and attempt to resolve the complaint. Whether that means anything within the plan will change is unknown.

The last piece of the puzzle is the release of a Signed Decision Notice by the Forest Service, which is expected to be complete by Dec. 19. Incidentally, that is three years to the day when the Hermosa Creek legislation became law. Then, the plan is official and implementation can begin.

Hooley said education, signage and other kinds of outreach would be the first steps, so things like seasonal closures wouldn’t be enforced until next winter. These final steps ahead of the Dec. 19 deadline also mean the end of the road for many people involved in the plan.

It began with a group of locals – boaters, water officials, congressional staffers, conservationists, tribal leaders, hunters and others – who sat down to discuss the best way to protect the watershed. Hooley, who’s been involved with the plan from the beginning as the environmental coordinator for the Columbine Ranger District, said she appreciates the community’s involvement.

“We had a lot of support from the community ... I credit that to the grassroots effort that started the whole thing,” she said.

On the city side of things, ebikes are moving forward – literally. The city began a year-long trial period Sept. 30, allowing ebikes on the Animas River Trail.

According to Parks and Recreation Director Cathy Metz, the city has received comments about general concerns with bike and pedestrian safety, but nothing specifically related to ebikes.

“The success or failure of the pilot program will be determined ultimately by the community,” Metz said in an email.

She encouraged residents to provide feedback throughout the trial period by emailing rec@durangogov.org.

The city is also looking for feedback on future plans for Chapman Hill.

Some initial ideas for the Chapman Hill Ski Area Master Plan will be presented at a community forum at 5 p.m. tonight (Thurs., Oct. 26) at Chapman Hill.

The master plan would touch on winter activities including tubing, lifts, snowmaking and lighting, as well as summer activities like trails. It will also address future expansion of the area. Metz said the city’s design contractor, Zehren and Associates, an Avon-based firm, will present its preliminary findings and recommendations at the meeting.

“We would like feedback from the community on the proposed improvements ... including any recommendations for changes,” Metz said.

For more information on the Chapman Hill Master Plan, call 375-7321 or email rec@durangogov.org.