An extra $400? Sure, why not
Polis plans to speed up tax refund; Republicans call out election-year move 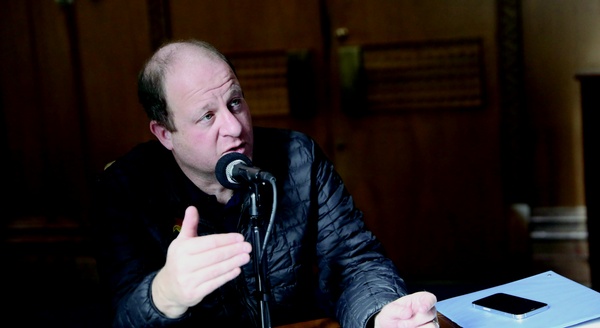 Colorado Gov. Jared Polis wants to refund taxpayers this summer, instead of next spring. Republicans are calling it a move to win favor in the November election./ Hart Van Denburg/CPR News

Governor Jared Polis wants to change how quickly – and in what amounts – Coloradans receive their upcoming TABOR tax refunds.

Polis is currently backing a bill to send taxpayers rebates – $400 for individuals or $800 for couples – this summer, instead of next spring.

To be eligible for the earlier payout, people must file their 2021 state taxes before the end of May.

Colorado currently uses a sliding scale that refunds more money to higher-income earners. Under the new bill, it would be a flat rate. The result is that people in the lowest income bracket – those making under $47,000 a year – would get an extra $124, while everyone in higher brackets would see a reduction in their expected refund from this pot of money.

Under the old system, the highest-earning taxpayers could have gotten up to $871 for single filers, depending on how much income they reported.

The bill, which lawmakers expect to introduce shortly, only affects the current TABOR refund, not payouts in future years.

The state government is paying refunds, because it’s collecting more tax money than it’s allowed to spend under the Taxpayers Bill of Rights. A strong economy last year has put state revenues about $2.2 billion above the TABOR cap, which limits state revenues to inflation plus population growth. This early TABOR payout would account for about $1.46 billion of that sum.

This leaves hundreds of millions in refunds still to be paid next year. That remaining sum will be distributed by reducing income taxes by a fraction of a percent, along with exemptions for senior and veteran property owners, and an additional smaller round of tiered sales-tax refunds.

“This last year has been difficult,” said Polis, announcing the proposal on the west steps of the State Capitol on Monday, surrounded by Democratic lawmakers and officials. ”Rising prices, gas at $4 a gallon, groceries costing more – rather than sit on this money, we know that $400 will help people now.

“I think one of the biggest challenges that people face is the cost of everything going up,” Polis said. “And really the best thing that I think that the state can do with our healthy surplus that we have because of our strong economy is immediately move up tax refunds and get ‘em out.”

Republicans were quick to blast the move; they accused the Democrats who support the bill of hypocrisy, since many have argued in the past that this money would be better kept by Colorado and spent on state services. And Republicans noted that people would receive the checks weeks before ballots are mailed out for the fall midterm election, when Polis and other leading Democrats are up for re-election.

“For years, these same Democrats have worked to undermine TABOR and fought to increase fees and taxes on everyday Coloradans,” said a statement from Colorado Republican Party Chair Kristi Burton Brown. “However, I’m pleased to see their apparent change of heart, even if it is clearly just an election-year game.”

Republican Rep. Matt Soper said he was a bit conflicted about the bill because on the one hand he wants to get the money in people’s pockets earlier than next spring, but he said it looks a lot like buying votes.

Another leading conservative noted how odd the whole thing seemed.

Fields was referring to Prop CC, a 2019 ballot measure that would have let the state hold onto excess tax revenues to fund education. Polis and other Democratic leaders supported it, but it failed with voters by seven points.

Polis dismissed the idea that the election has anything to do with the latest TABOR policy. Instead, he said this moment in time calls for this action.

“Obviously there’s gonna be, you know, cynics who decry it,” Polis said. “But I think that the real question I put to them is, ‘why do you think the government should hold on to your money for another nine months?’”