Anglers, floaters asked to give fish a break
Ash and debris from the 416 burn scar are not helping matters. 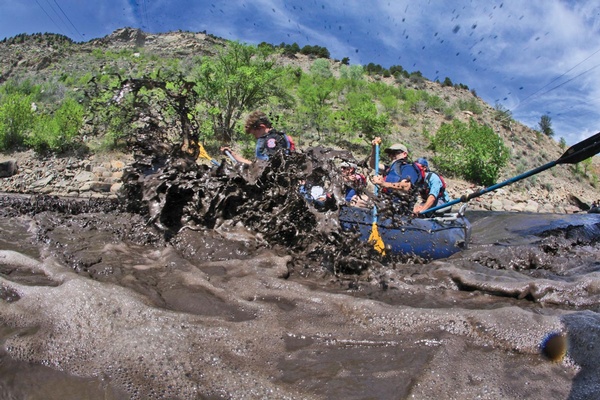 The Animas River turned black from ash Wednesday, although rafters didn't seem to mind. Local fish, however, have been stressed, and anglers and floaters are asked to limit river activity to help fish survive./Photo by Stephen Eginoire

To put it bluntly, the Animas River is a hot mess right now. And to help fish survive the onslaught of high temperatures, low flows, and ash and debris runoff from the 416 Fire, Colorado Parks and Wildlife officials are asking for angers help.

On Tuesday, CPW announced it was asking anglers to cooperate with a voluntary closure on fishing from 12 noon - 7 p.m. on the river. This time coincides with the hottest temperatures on the river. According to the CPW, afternoon water temperatures have been reaching 70 degrees; temperatures in the mid-70s can be fatal to fish as they compete for oxygen and food. The historical mid-summer average temperature on the Animas is 58 degrees.

“The temperature of the water does drop at night, so when the water clears we suggest fishing in the morning hours until noon,” John Alves, the CPW’s senior aquatic biologist, said. “The fish are already stressed because of the warm water and their stress level only goes up when they start fighting a hook and line.”

Ash and debris from the 416 burn scar are not helping matters. On July 10, CPW confirmed a significant fish kill in the river north of Durango, which was originally reported by a local family. Wildlife officials

Since then, there have been several reports of dead fish, north of Durango all the way through town. Most of the fish found dead were brown trout.

“We inspected the fish and found their gills were coated in ash which caused them to suffocate,” Alves said.

Alves said that ash and sediment run-off is likely to continue throughout the summer, and it could continue for more than a year.

Compounding the problem is the river’s low flow. Despite a small spike on July 18 to over 500 cfs, the Animas River has been languishing below 300 cfs. The average flow for this time of year is about 1,000 cfs.

“The water in the Animas River is so low that it can’t dilute the ash and sediment flow,” Alves said.

And lastly, humans play a role in the situation as well. Trout can be stressed by float-craft on the river, including SUPs and tubes. When trout see something above them, they will seek cover in deep pools, behind rocks and under banks. But when they’re forced to move, they must use extra energy, and because there is so little water in the river, there are fewer places to hide.

CPW offers these suggestions to reduce stress on fish:

• Buy a small thermometer and take the

temperature of the water. If the temperature is 70 degrees or above, stop fishing.

• Fish in the morning when water is cool. • Fish high-elevation streams.

• Use heavier tippet and land the fish quickly. Don’t “play” or tire fish.

• Use barbless hooks that allow a quick release. Those using spinning gear, who don’t intend to keep fish, should press down the barbs of metal lures.

• Release fish as fast as possible and minimize handling of fish.

“Monsoon rains and, hopefully, snow next winter will help the river and fish recover,” Alves said. “But we can all do a little now to reduce stress on fish.”