Another one bites the dust
Reeling in the last of last year's big news: dying coal; uranium; and parking vs. people 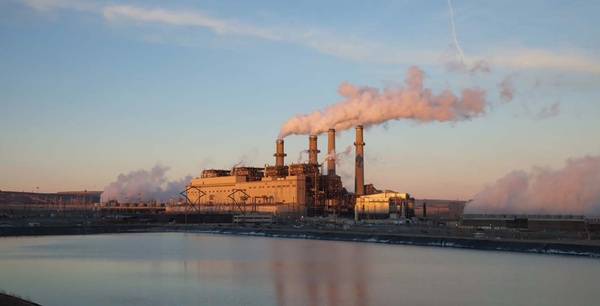 Happy New Year and welcome back to the Land Desk. We have some catching up to do on hibernation season news, so we’ll jump right in ...

San Juan Generating Station, one of the biggest coal power plants on the Colorado Plateau, is dead, along with efforts to revive the polluting behemoth and retrofit it with carbon capture equipment. After a series of legal defeats, the city of Farmington – which owns a 5% share of the plant – announced in December it was dropping its bid to take full ownership of the plant and turn it over to Enchant Energy.

Public Service Co. of New Mexico shut down the last unit of the plant in September and was moving forward with decommissioning, a decision the utility made back in 2017 for economic reasons. But Farmington continued its legal fight to take over the plant, even though Enchant’s $1.6-billion plan was deemed infeasible by multiple energy analysts and the company had repeatedly failed to meet critical benchmarks.

Now Farmington is out at least $2 million in legal costs, and it must play catchup on economic development efforts and to replace the power lost when the plant shut down. True to its fossil fuel favoritism, it looks like Farmington will build a new natural gas plant to fill some of the energy gap rather than more cost-effective solar. And instead of truly diversifying its economy, the city and region are hoping to continue relying on fossil fuels in the form of hydrogen production using the vast stores of methane as feedstock.

Unfortunately, planned solar installations that would replace lost property tax revenues crucial for local schools have been delayed by supply chain constraints and inflation. And funds from the Energy Transition Act have also not yet been disbursed.

Enchant Energy, which sprouted from an obscure New York hedge fund in 2019 for no other reason than to keep the plant running (and polluting) while collecting hefty federal subsidies, says it is looking into taking its carbon capture projects elsewhere. In November, the Intermountain Power Association soundly rejected Enchant’s unsolicited bid to purchase retiring Utah power plants and keep them running, apparently to power data centers and/or cryptocurrency mining operations.

It wouldn’t surprise me if Enchant tried to shift its pipe dream … er, carbon capture plans … across the San Juan River to the Four Corners Power Plant, another major polluter that is headed toward retirement by the end of this decade. The Navajo Transitional Energy Company, or NTEC, which is owned by the tribe but acts independently, owns a small share of the plant and the Navajo Mine that feeds it, and so has an interest in keeping it running. NTEC also invested an undisclosed amount into Enchant last year.

NTEC has been making the news elsewhere. The company is suing BNSF railway for allegedly breaching its contract to deliver coal from NTEC’s huge mines in Wyoming’s Powder River Basin to the West Coast. Yes, despite the “transitional” in its name, NTEC is one of the nation’s largest coal producers.

Meanwhile, NTEC is partnering with Arizona Lithium Limited to develop the Big Sandy mining project on Bureau of Land Management claims near Wikieup, Ariz. NTEC CEO Vern Lund sees the project as an opportunity for the company to delve into clean energy, which he says will “benefit native tribes.” But the Hualapai people may disagree: The tribe has been fighting the proposed mine since its inception because it would destroy hot springs and land the tribe holds sacred.

While coal may be declining, uranium seems to be on the move. The Department of Energy awarded contracts to four companies to supply product to the Federal Strategic Uranium Reserve. That includes $18.5 million to Energy Fuels – the owner of the White Mesa Mill near Blanding, Utah – and to Uranium Energy Corp. The companies both say they will use the proceeds to ramp up or reopen mines in Utah and Wyoming.

I can’t help it. I have to do an “I told you so” about one of my pet peeves: the parking space separation anxiety that plagues much of America, including my hometown of Durango. Just to recap: A lot of Durangatans are freaking out about a proposed main drag makeover to make it more people-friendly because it might take away some precious parking, which they allege is in short supply. Well, it’s not. A comprehensive study by the City of Durango found that on average, only 74% of downtown on-street public parking spaces are occupied during peak hours. This means that even during the busiest times, more than 100 parking spaces are available within easy walking distance of downtown, meaning the town can afford to lose some Main Avenue parking to make it a more amenable place for people.

The stat inspired me to go looking for some other parking lot data. It’s alarming.

• 121,500: Number of households that could be powered by solar canopies covering all of La Plata County’s parking spaces. (Berkeley Lab)

• 12.2 million: Number of parking spaces in Phoenix in 2017 for about 4 million inhabitants and 2.7 million registered vehicles. (Cities)

• 820 million: Estimated number of parking spaces in the U.S. (VTPI.org)

The Durango parking study is worth reading (tinyurl.com/3tz93h95) and also contains some alarming figures regarding projected growth in population and number of cars for the town.

The Land Desk is a newsletter from Jonathan P. Thompson, longtime journalist. To subscribe, go to: landdesk.org