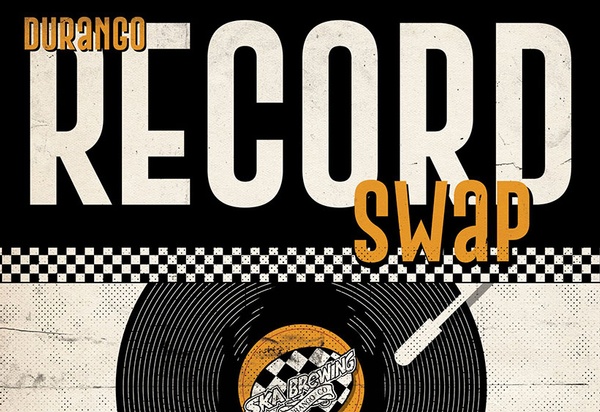 Do you love music, talking about music and drinking beer with people who also love music? Don’t worry – this is not a too-good-to-be-true “missed connections” Craigslist ad. This is to let you know about the return of the Durango Record Swap happening next Tues., April 12.

After a bit of a hiatus during the pandemic, the Durango Record Swap is back, this time at Ska Brewing, featuring vendors with a ton of records to buy, a DJ spinning music and, of course, all the beer you could want.

“This is taking our little club to the next level,” Philip Gallacher, organizer of the Four Corners Vinyl Record Club, which is organizing the swap, said. “We hope this builds momentum, and it becomes a big community event.”

About 10 years ago, Robert Stapleton, the owner of Durango’s longtime music store, Southwest Sound, started organizing record swaps around town. But when Southwest Sound closed in 2018, Gallacher and other vinyl aficionados started the Four Corners Vinyl Record Club to keep up the events.

But then, you know, COVID.

“We were gaining a lot of traction,” said Gallacher, with the last swap in March 2020 right before the shutdown hit. “But then with the pandemic, everything just died on the vine.”

Gallacher, however, ran into his old buddy Dave Thibodeau, co-owner of Ska, during Snowdown (when else?). Thibodeau is also an avid record collector, so I think you can see where this is going.

“We’re a music-focused brewery; music plays a big role for us, and I thought it would be fun to have a swap here,” Thibodeau said. “You can come, have a beer, hang out and talk about records while looking through records. It just seemed so fitting.”

From 4-7 p.m., there will be about 10 vendors from all over the region selling vinyl. Local musician Rob Webster will be spinning some music, especially ska records.

With the resurgence of the popularity in vinyl, Gallacher hopes the Four Corners Vinyl Record Club can start to host other events, like a vinyl club night where you come with your own records and put ’em on the turntable. Already, the club plans two more swaps in August and November at Ska.

“This is a test run,” Gallacher said of the upcoming swap. “If all goes well, we will probably start planning other events.”

Interest in vinyl dramatically dropped off with compact discs splashing onto the scene in the 1980s/’90s. But CDs have subpar music quality, get scratched and skip when you go jogging. And regardless, they were subsequently replaced by MP3s and streaming services, also of subpar quality.

In recent years, however, vinyl has made a surprising comeback, for a variety of reasons. Some people like the physical copy of a record compared to a streaming service, with its liner notes and album art. Others enjoy the nostalgic feel of putting a record on a turntable. And, for some, it just comes down to the fact records have superior sound to any other platform.

In 2021, vinyl sales jumped more than 50%, surpassing both digital and CD sales, according to Statista, an industry-tracking website. Last year, about 41.7 million records were sold in the U.S. (in 2006, when the vinyl revival started, sales were hovering around 1 million). Even Walmart offers vinyl now, so, there’s that.

The people of Durango have always loved their vinyl. Having a reliable store, however, has been an issue.

For years, Southwest Sound and Record Man (which was located where Raider Ridge Cafe is now) were the go-to spots for music. But Record Man closed in the mid-2000s, due to people losing interest in vinyl and Walmart dominating the CD market.

“When Walmart came to town, that really put a hurting on me, because you can’t compete with them,” the Record Man himself, James Kanagy, said. (Kanagy in 2003 sold Record Man, which closed for good a few years later)

That left Southwest Sound, which opened in 1977, as the only music store in town. But that shop, too, felt the increasing pressures of the internet and digital downloads, and closed in 2018.

For three sad years, Durango was a town without a dedicated record store, until Toast Records & Tapes opened this past summer in the 600 block of Main Avenue (though there are a number of second hand options, like Dunn Deal, the Humane Society, Durango Antique Market and the Flea Market in the summer).

“It’s been going great; there’s been a lot of community support,” Josh Bensik, owner of Toast, said. “A lot of people are just stoked to have a record shop back in town.”

Bensik said the store hopes to expand to offer more of a selection (and a bakery is opening there May 1). Since opening, his customers have run the gamut, he said, from teenagers to people in their 70s.

“A lot of that age group (teenagers) are tired of streaming,” he said. “They just don’t feel connected, and so they’re getting away from screen time and slowing down, listening to more music, reading.”

Even Kanagy, the Record Man, said he has continued to sell vinyl on consignment ever since his shop closed, and his customer base has increased significantly.

“There definitely has been a resurgence in vinyl,” he said. “And the interest is really from all demographics. And I think it’s because vinyl is the antithesis of digital. It’s something tangible.”

Gallacher, for his part, is just ready to be back in person with people who all share a love of music.

“Music, beer, that social aspect – that’s what we’ve been missing,” Gallacher said. “I think everyone is ready to get together to talk about great music while listening to great music.”