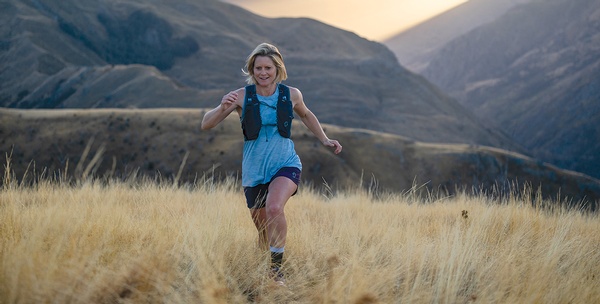 Ultrarunner Anna Frost on a casual jaunt. When not starring in photogenic shoots, she's busy winning Hardocks and the like, and – more recently – raising daughter Skyler. Frost will be among the speakers at the Women Outside Adventure Forum story night on Sept. 30 at the Powerhouse./ Courtesy photo

After a two-year COVID hiatus, Durango’s Women Outside Adventure Forum is back. And this time, they’re not taking things sitting down.

This year’s event, Sept. 30 – Oct. 2, not only offers the usual slate of rad local women talking about their outdoor exploits, it also offers the opportunity for others to get out there and dare to be rad themselves.

“Since our 2020 event was cancelled by the pandemic, I decided it was time to step back and reimagine Women Outside,” event founder and organizer Margaret Hedderman said. “The event was always about inspiring women to try a new sport or tackle a dream adventure, but now we’re giving them the tools to do it.”

The theme for this year’s event is “Permission Slip,” Hedderman said, with the idea of women allowing themselves permission to go out – even if they don’t have the best or newest gear or credentials – have an adventure, do something new and, most importantly, have fun. (Just don’t get hurt.)

“Sometimes giving yourself permission to try a new sport or pursue a dream is hard,” Hedderman said. “This year’s event is all about giving women a permission slip to stop waiting and start doing.”

And there will be lots of chances for “doing” at this year’s forum.

“The speaker presentations are important, but I wanted to have clinics so you can do something with that inspiration, put it into action,” said Hedderman.

Hedderman said she got the idea to move away from the speaker-heavy format of years past to more of a hands (and feet) on format after hosting a womens ice climbing clinic last March. The clinic was sponsored by Backcountry Experience, which also deserves a shoutout as the longtime organizing sponsor of Women Outside, along with other local and national businesses.

“It was really refreshing,” Hedderman said. “I had always wanted to have a more interactive element. It was a fun way to play with the idea.”

Also new this year, the forum was moved from March to September to take advantage of prime fall weather in the Four Corners.

“It used to be in shoulder season, but I moved it to fall to have more opportunities to spend time outside,” Hedderman said.

In order to fuel the stoke for the weekend’s outings, Hedderman has lined up an impressive array of local female badassery to rally their fellow women (and you too, dudes) for a story night Sept. 30 at the Powerhouse. The eight guest speakers are tasked with telling a 10-minute tale about a pivotal outdoors experience in their lives. Think of the evening as a butt-kicking pep rally (one you should RSVP for, BTW.)

“The idea with story night is these women are like your neighbors and friends,” Hedderman said. “There’s so much you can learn and get inspired by to do your own adventure. There’s something special about celebrating the women from around here.”

This year’s speakers include, in no particular order:

• Bee Mathis, local climber and below-the-knee amputee who kicks more ass with her prosthetic than most of us do with two legs.

• Debra Van Winegarden, local hiking diva, blogger and writer. Chances are, if there’s a peak in the San Juans, she’s bagged it.

• Hannah Green, artist and super stud runner who also has a few Hardrocks under her belt.

•  Heidi Steltzer, FLC professor whose studies on mountain science relating to snowpack have gone all the way to the UN study on climate change.

• Jenny Vierling, co-founder with her husband, Jeff, of Tailwind Nutrition, which we all have on our kitchen shelves, packs or water bottles as we speak.

The kick-off evening, which is totally free, will also include a chance to win prizes, with proceeds going to the San Juan Citizens Alliance, as well as a round of “Adventure Buddy Bingo.” The goal of the game is to help folks make new friends to explore the outdoors with and maybe relive it over beers afterward.

“We hosted a similar event – Adventure Buddy Speed Friending - in June,” said Hedderman. “The level of excitement in the room just goes to show how important it is to offer opportunities for locals – no matter how long they’ve lived here – to make new connections in town.”

Then, of course, after everyone’s connected and amped on adventure, the next step is to get out there and get after it.

“I think a lot of women wait to be told it’s OK to get outside … the whole idea is to stop waiting and start doing,” said Hedderman

For the full Women Outside schedule, go to: www.womenout side.org.