Back in black
DNF climbs out of hole, restructures membership to help build nest egg 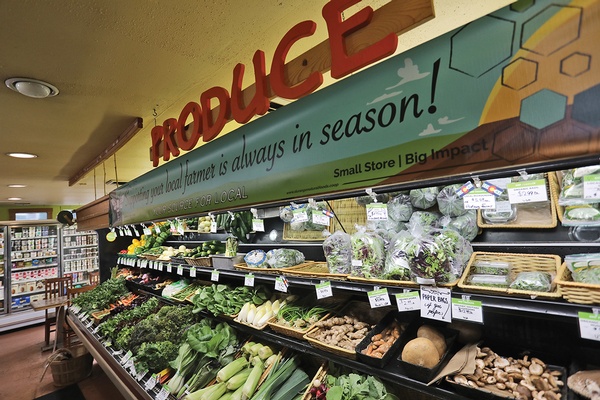 The produce section at Durango Natural Foods was well-stocked this week. After a challenging winter, in which the local co-op owed local farmers and other suppliers a backlog of $150,000, DNF has turned itself around and paid off almost all those debts./Photo by Stephen Eginoire

The local landscape isn’t the only thing coming back to life after a long, hard winter. Durango Natural Foods, the beloved but recently beleaguered local food co-op, is also showing signs of renewed life and vigor.

“We are definitely in a DNF revival,” co-op Board President Cody Reinheimer said Tuesday.

Earlier this year, the 45-year-old co-op had racked up $150,000 in unpaid debt to vendors, including local farmers that supplied the store with produce. However, thanks to a Go Fund Me campaign that raised $17,000 as well as a $75,000 loan from a member in late January, the co-op was able to stay afloat. Now, more than four months later, DNF is back on solid ground – with its local suppliers as well as its finances.

Reinheimer said the co-op has “completely” dug out of the hole to local farmers and is nearly done paying off the backlog to other local and national suppliers. He said he has personally talked to many of the local farmers affected, who remain committed to the co-op.

“All the ones I’ve talked to have said they are super happy to keep working with the co-op,” he said.

In addition to the financial lifelines, the co-op has also sought out the help of National Co+op Grocers, or NCG, an Iowa-based organization providing business services for co-ops throughout the country. “It’s basically a co-op for co-ops,” Reinheimer said.

First and foremost, NCG helped hire and pay a large part of the salary for six months for a interim general manager. Lucinda Berdon began working March 16 and will continue until Sept. 16, at which time a new GM will take over. Reinheimer said a search for her replacement will begin within a few weeks. “We realized the general manger position is oh so important,” he said.

In addition to the new managerial help, NCG also provided the co-op with other valuable insight and advice as well, he said. “It’s an organization that wants to see co-ops succeed,” he said. “They helped us navigate a lot of challenges over the winter.”

One of the first things Berdon did was to lower prices at the co-op to help make it more competitive with other local prices . In addition, the co-op did away with the thrice-weekly 10 percent member discount days.

“We realized it was definitely undermining our profits and was a big reason for our financial crisis,” Reinheimer said.

But this isn’t to say members won’t be seeing any more discounts. Recently, the co-op's members  voted to approve a change in the bylaws to the membership structure. Instead of paying the one-time membership fee of $100, members will now be asked to renew for $20 yearly on their membership anniversary. However, the $20/year fee will be capped at $300, meaning those who’ve already paid the $100 will pay off the new amount in 10 years. New members can sign up for $20/year and will be asked to renew for $20 annually until the $300 cap is reached.

Reinheimer said the new fee structure is in keeping with other co-ops around the country. In addition, it will help DNF build a reserve fund to insulate it against future financial calamities and the whim of outside forces.

“Who knows when we’ll have another fire, flood, huge winter or road construction,” he said. “We want to take precautions to make sure something like last winter’s financial crisis doesn’t happen again.”

To that end, the co-op is making a special plea to members to pay off their additional $200 equity sooner as part of the co-op’s new “Stock Our Root Cellar” campaign. The goal is to raise $100,000 for much-needed infrastructure repairs, emergencies and to provide a nest egg in the event of any unforeseen events. It will also help the co-op secure a $45,000 grant from NCG to help subsidize the salary of a new general manager. Reinheimer said the organization wants to be sure DNF is dedicated to building its reserves before it invests more money.

Members who opt to pay $100 or more in advance will get a 10 percent off coupon. Starting in July, benefits for all members will also return, with quarterly 10 percent discount coupons, in-store members-only discounts (look for the orange tag), special deals and a 20 percent off case discount. In addition, members can vote in all co-op elections.

“People will more than recoup their investment,” Reinheimer said. “Plus, they’ll get to have a voice in the co-op.”

He said he and other board members are excited about the co-op’s direction, not just as a purveyor of sustainable, fair trade and equal exchange products but as an outlet for local producers. “It’s been really great and we’re looking forward to continuing that,” he said. “We’re looking to have more food than ever from local farmers.”