Back to Brigadoon
Stars and sunsets: One volunteer's tales from behind the scenes at Telluride Film Fest 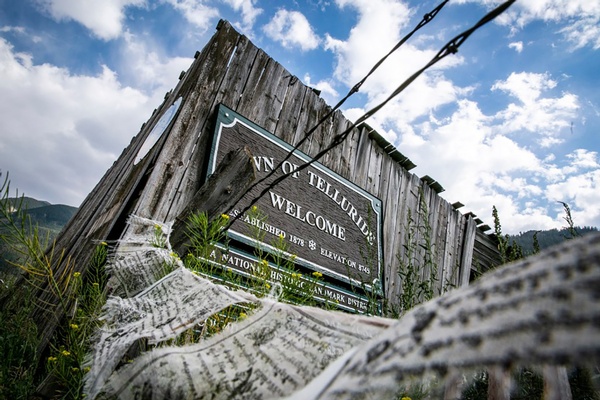 The infamous Telluride welcome sign greets guests attending the 2021 Telluride Film Festival. Low key in comparison to other film festivals, the event is a time for regulars to reconnect with old friends, see the latest films and, of course, spot a few incognito stars./ Photo by Hart Van Denburg/CPR News

Caryn Sanchez is a true believer in the Telluride Film Festival. This year’s edition, held Sept. 2-6, will be the 28th festival for Sanchez, who is one in an army of volunteers and gig workers at the storied festival. She started attending after moving back home to Colorado to work on her own independent films.

“I was working at a granting organization at the time, and the executive director was so concerned that if I moved away from L.A., I would just completely fall off the map in terms of filmmaking,” Sanchez said. “So he said, ‘You have an amazing film festival in Colorado. It’s the Telluride Film Festival. I want you to promise me that you’ll get in touch with them when you get there and become involved because it will help you stay in touch with the film culture, and it’ll keep you engaged in what’s happening outside of Colorado.’”

Sanchez arrived at the festival in 1993 as an intern. She bunked with three other women in a boarding house. Two of her first roommates have since gone on to become a producer and filmmaker.

“In the past I would, if I had the time, arrive early, and I’d help them actually construct stuff,” Sanchez said. “One year, I was so happy because I actually made a concessions cabinet. I’d never used power tools before … All during the festival, I was annoying everyone. Like, ‘Oh, come see my concessions cabinet!’”

The Telluride Film Festival – like many around the state and country – relies on people to do everything from take tickets, set up parties or concessions, and act as traffic cops for patrons getting to and from theaters. For many, it’s a way to stay connected to the film industry or have some celebrity sightings. For others, it’s an annual and indispensable fixture in their lives.

“The thing I love most about Telluride is it’s always been a very sort of down-to-earth place, very unpretentious in a weird way,” Sanchez said. “Everybody’s like sitting on the sidewalks, drinking their coffee and checking out the sunset over the canyon at night, it becomes sort of this real magical place.”

Part of that magic is also spotting movie stars, which for a festival known for its intimacy, is easier than at many of the larger festivals. Sanchez remembers working at the Sheridan Opera House in Telluride when Janelle Monáe, a rapper and actress in the 2016 Academy Award winning film “Moonlight,” stopped by to take pictures with Barry Jenkins, the film’s director.

“She came over to me and she asked, ‘Can you recommend any films?’” Sanchez said. “I said, ‘Oh, we’ll be showing a wonderful silent film here today, a Fritz Lang silent. It’s actually one of his lesser-known ones that will be showing here with a musical accompaniment.’”

Sanchez said later that night, she was pleased to see Monáe and a couple of her costars from “Moonlight” show up to watch the obscure film.

But for Sanchez and many of the volunteers, the real appeal of Brigadoon in the San Juan Mountains is the chance to see other returning faces. It’s a recognition that extends to pass holders and returning guests as well. “I’ve been there 28 years, and I’m not a senior member,” she said. “There are people who’ve been there longer than I have.”