Bagging it
Plastic bags, Styrofoam will largely disappear from stores and restaurants in 2024 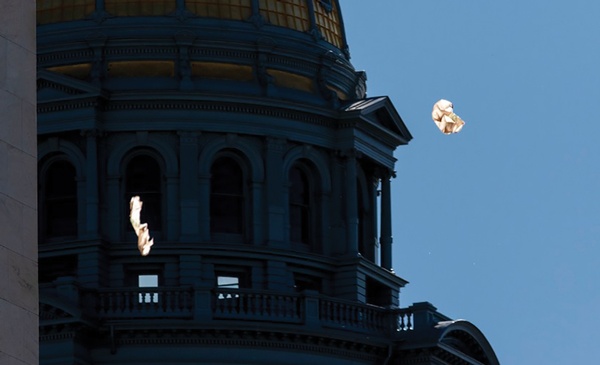 Plastic bags float in the breeze on a very windy day outside of the Colorado State Capitol. / Kevin J. Beaty/Denverite

The ban, which will also apply to single-use foam containers, won’t fully go into effect until 2024, but the state will start introducing those restrictions in 2023. Customers will have to pay 10 cents per paper or plastic bag at establishments that have to follow the ban.

Sixty percent of the money raised by the temporary bag tax will go toward local recycling or composting programs. The rest will go to the businesses themselves.

Colorado Democrats pushed the ban as part of their efforts to reduce the state’s reliance on single-use plastics and their overabundance in landfills. State Rep. Alex Valdez told the House Committee on Energy and Environment the practicality of plastic bags does not justify the waste being created by them.

Several state agencies will have to pay extra to comply with the ban. Colorado’s Department of Corrections will need to replace foam containers used for prepackaged meals with paper products. That will result in an estimated $103,675 increase in the general fund.

The ban will also affect school districts, but it’s unclear what the exact cost will be. The legislative analysis estimates it will cost an additional $5.80 per student per school year to replace foam packaging. There are about 890,000 students in the state.

“The amount of the increase will depend on the type of food service facility located in the school, the number of student meals served per day, and the cost of alternative solutions,” legislative council staff wrote. “Some school districts may also have already put policies in place to limit the use of plastic products.”

There will be several exemptions to the ban. Amendments to the bill – pushed by state Republicans, plastic industry lobbyists and businesses – exempted small stores, depending on a municipality’s specific rules.

State Rep. Lisa Cutter, the bill’s co-sponsor, told CPR News she was disappointed by that change.

“It removes a significant portion of stores. Many, many small businesses want to be part of the solution,” Cutter said.

However, the bill lets county or city governments enact stricter bans than the state, which could mean these statewide exemptions may not exist in certain communities.

Other establishments, like laundry services, farmers and pharmacies are exempt. Those small plastic bags in the produce aisle also won’t be affected.

A similar law in Denver went into effect last week. Customers at major retail stores, like grocery and department stores, already have to pay 10 cents per paper or plastic bag if they’re shopping within city limits.

For more from Colorado Public Radio, go to: www.cpr.org. ?