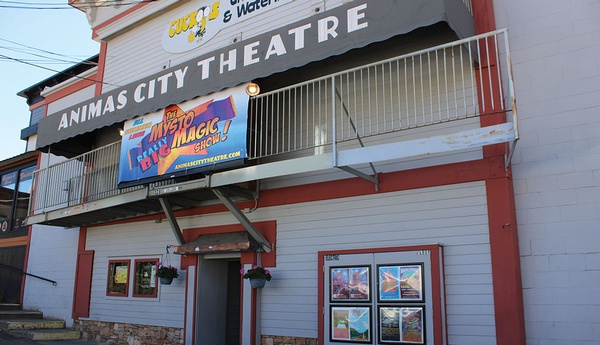 Due to low sales in the summer, the Animas City Theatre will host a magic show./ Photo by Jonathan Romeo

Citing low turnout for concerts in the summer months, one of downtown Durango’s longest-standing venues, the Animas City Theatre, has decided to forgo hosting live music and instead offer a magic show four days a week until Labor Day.

“Basically, the attendance is historically low for music during the summer, and we’ve lost money every year,” Michele Redding, who has co-owned the ACT for nine years, said. “We’ve tried all different things over the years trying to get people in the door, and it just hasn’t happened.”

Redding said the abundance of outdoor concerts and festivals, both locally and across the region, coupled with the fact most Durangoans are out enjoying the mountains, deserts and rivers, leads to low ticket sales in the summer.

Still, the absence of shows at the ACT, which many see as the town’s only classic music venue, has come as a disappointment to some local music lovers.

“We have gotten some harsh responses,” Redding said. “But we try to respond positively about our reasoning.”

Historically, the ACT has done well with ticket sales from September through April or May, Redding said. Then, as schools let out and families go on vacation, and Durangoans take to the outdoors, there’s a steep drop off.

When taking into account the cost of hiring bands, staffing to run the show and other operational expenses, Redding said the ACT’s previous owner would just shutter its doors over the summer.

“I prefer not to do that,” she said. “We want our staff to stay employed. That’s a biggie for me.”

In her tenure, Redding said the ACT has tried most everything to lure people to shows. They brought in national touring acts. They tried hosting shows later at night, after bars started to wind down. One summer, the ACT booked just local bands for a $5 cover. And, the ACT has tried booking headliners en route to major festivals in the region on weekdays.

Nothing has seemed to work, Redding said. As a result, on average, the ACT sells around 60 tickets per show during the summer, which is nowhere near enough to cover expenses and turn a profit.

It’s not just the ACT that finds difficulties booking shows in the summer, either. Charles Leslie, director of Fort Lewis College’s Community Concert Hall, reiterated many of the same issues, which is why the venue rarely hosts shows from June to August.

“There is so much outdoor activity in Durango that hosting indoor concerts has never proven to be super successful,” Leslie said.

It might be helpful here to lay out the landscape for booking music in our (somewhat) remote corner of the world. For starters, Durango is a relatively small market that’s not located on an interstate or generally on the way between major markets, such as between Denver and Albuquerque or Salt Lake City.

As a result, places like ACT or the Concert Hall have to pay more to lure artists, which drives up ticket prices. If people don’t show, promoters still are on the hook to pay bands, staff, utilities, hotels, meals and other expenses.

“It’s a risk every time you book an artist,” Leslie said. “Because if people don’t show, you are in trouble financially.”

Venues generally try to land artists who have either successfully played Durango before or are considered up-and-coming. But then you have to factor in the other curveball: Durango crowds are notoriously finicky.

“If you figure that out, you’re gonna make millions,” Leslie joked. “But that is the ongoing question: How do you know if artists are going to do well?”

Of course, people in the community always say: book better acts, and turnout will improve. But, seeing as everyone has their own definition of what is “good” music, this logic is subjective. So, the onus falls on the booking agent, who tries to appeal to what he or she thinks will draw the biggest crowd.

Eugene Salaz, who has been the booking manager at the ACT for 12 years, is sort of a gatekeeper to the music Durangoans are exposed to and get to enjoy. And he’s aware people have strong opinions on his music choices, to say the least.

“Everyone has something to say about everything, and they’re not afraid to hold back,” Salaz said. “I’ve been getting hate mail, and I’ve just accepted the fact you can’t make everyone happy.”

The ACT gets 20-30 emails a day from bands – both smaller and larger acts – interested in playing Durango, Salaz said. But he has to weigh a number of factors: Have they performed here before? Does the band’s available date conflict with a major outdoor festival?

“If we think it has some sort of a risk, we’ll pass,” he said. “And we take into account Durango is probably one of the most unpredictable markets in the music industry in our state.”

Despite public perception, the ACT does not cater to Fort Lewis College students, Salaz said. Instead, he said he books genres he knows are palatable to Durangoans: bluegrass, funk, jam, reggae and electronica.

Josh Bensik, who managed the Abbey Theatre (now the ACT) in the early 2000s, said it’s often too risky for booking agents to branch out on genres. Bensik, at the time, successfully brought in a lot of notable hip-hop acts. But when he tried putting on indie music shows, for instance, people simply wouldn’t come out.

“People typically don’t show up for an artist they haven’t heard of, which was my biggest challenge when booking music,” Bensik said. “And that limits a venue’s ability to bring larger, more notable acts.”

Salaz, for his part, said he has tried booking other genres, like indie and punk, but he maintains the market just isn’t there to make those shows viable.

“We want to extend our reach to every genre, but if people don’t come out, and we lose money, we have a huge hesitation to bring that style back,” he said. “That’s why you see a lot of the same styles; that’s what is selling in our market.”

Still, others say there’s a shortage of “traditional” venues in town, which limits the diversity of music. It’s a hard statement to definitively prove or disprove.

Of course, there are plenty of bars that host live music, and it seems every other day there’s a concert in Buckley Park. There are also niche popup venues, like The Hive, catering to the garage punk scene, and iAM’s iNDIGO Room, which hosts singer/songwriters in a more intimate setting.

But as far as a regular, dedicated venue, the ACT appears to be it, especially after the Summit closed in 2013 (though the space hung under the Balcony Bar & Grill’s management for a few more years). In 2020, the Henry Strater Theatre, too, closed, with the future of that iconic venue also uncertain.

“I don’t think there’s a shortage of places to play,” Bensik said. “But when I think about a true music venue, in my mind, we only have the ACT; that’s the only one that’s left in town.”

The ACT, generally speaking, is what brings the biggest names to town. But to be able to make money on a bigger act, the venue, which holds 270 people, would have to charge $60-$100 a ticket. It poses a tough question: will Durango show to make it profitable, or will high prices turn people away and cause a loss?

Given all the complications for venues and booking agents in Durango, Bensik, who now runs Toast Records & Bake, said the ACT does a great job for a community our size.

“It’s extremely challenging to please a community as large as Durango,” he said. “Our community is so isolated, and on top of that, everyone’s taste is so different, so it’s tough to make everyone happy.”

Of course, COVID-19 added to the problem. The ACT was closed for 15 months during the pandemic and was only able to survive because the building’s owner didn’t charge rent.

Now out of the pandemic, Redding said attendance has slowly rebounded. Unable to afford losing money over the summer, as has been the case historically, the ACT decided to try a magic show in the hopes of drawing in tourists (and yes, locals, too) in the evenings. This way, Redding hopes the venue can continue to pay its staff and make some money over the summer.

“We felt it would be worth giving a try,” she said. “We thought we could fill a niche and give families something to do in the evening.”

Ticket sales, so far, have been increasing for the magic show, hosted by Durango local Mysto the Magi, which features rope and card tricks, optical illusions, a female assistant getting cut in half and even some solid dad jokes (yes, I attended a show for journalistic purposes, and I can see how it would be far more entertaining for kids than the typical parenting plan of letting them play on a brewery floor while Mom and Dad drink beer).

And music will return – soon, Salaz said. Already, the ACT has booked shows for the fall and winter months, and even into 2023.

“The way ticket sales have gone in the summer in the past, it would be cheaper just to close our doors and pay rent; after 12 years, the numbers don’t lie,” Salaz said. “But music is coming back, and it’s going to be huge.”