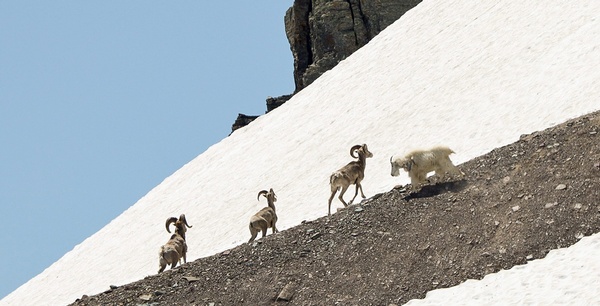 Through the lens of a high-powered scope, conservation ecologist Joel Berger noticed something unusual happening on a scrap of mud above the treeline in Montana’s Glacier National Park.

Berger, a professor at Colorado State University and scientist for the Wildlife Conservation Society, had joined doctoral student Forest Hayes on a trip to observe grizzly bears in 2019. Those animals remained hidden, but the scientists watched a tense interaction between two different large mammals: mountain goats and bighorn sheep.

It quickly became apparent the animals could be locked in a turf war. The goats huddled around spots of bare earth once covered by glaciers, which are shrinking due to global warming. When bighorn sheep approached, the goats got serious about protecting the snowless patch of dirt.

“They would do a rush charge with their saber-like horns,” Berger said. “The sheep would move off.”

A study published Monday in the scientific journal Frontiers in Ecology and Evolution documents dozens of similar conflicts between goats and sheep in the mountains of Canada, Montana and Colorado. The research suggests the animals might be fighting over salt licks exposed by melting snow and ice in alpine regions, which are warming far faster than other parts of the planet. Many animals rely on dirt or rocks for micronutrients absent from their normal diets.

The researchers also found a clear winner in the rock-licking resource war. In 98% of contests, goats dominated, forcing the less aggressive sheep to seek minerals elsewhere.

The findings raise new questions about conflicts between the two charismatic mountain dwellers. Even if they look at home in scenic photographs, mountain goats aren’t native to Colorado.

The Colorado Division of Wildlife – now known as Colorado Parks and Wildlife – actively brought goats into the state from more-northern latitudes between 1948-72. The animals quickly spread across the region, providing an ongoing source of government revenue from the sale of hunting permits. Today, state residents pay $320 to harvest a mountain goat; nonresidents pay $2,343.

Those problems have led wildlife officials at Grand Teton National Park in Wyoming to take drastic action to protect its native population of bighorn sheep. Earlier this year, it hired aerial gunners to kill 58 mountain goats living in the park.

Berger’s study included both native and non-native mountain goat habitats. In all cases, the researchers observed the two species battling it out over mineral deposits. The study doesn’t comment on whether mountain goats should be removed from landscapes to protect sheep populations. Instead, it takes a broader view, suggesting they could be an example of climate change spurring an interspecies conflict.

While research on animal battles is scant, Berger and his colleagues found larger species tend to dominate fights over scarce resources. One study found elephants often scare buffalo and zebra away from desert water holes. A separate study notes rhinos kept antelope out of precious shade.

By understanding how people’s activities contribute to those conflicts, Berger said conservation groups and governments could gain a better sense of how to preserve wildlife. That could be especially important as climate change opens up new resources and takes away others.

As climate change continues to warm the planet, humans and animals could find more reasons to fight.

In his observations of goats and sheep, Berger couldn’t help but think of human conflicts to dominate the Arctic. As sea ice melts, the U.S., Russia and other countries have rushed to control new shipping lanes and fossil fuel resources.

For more from Colorado Public Radio, go to www.cpr.org  ?