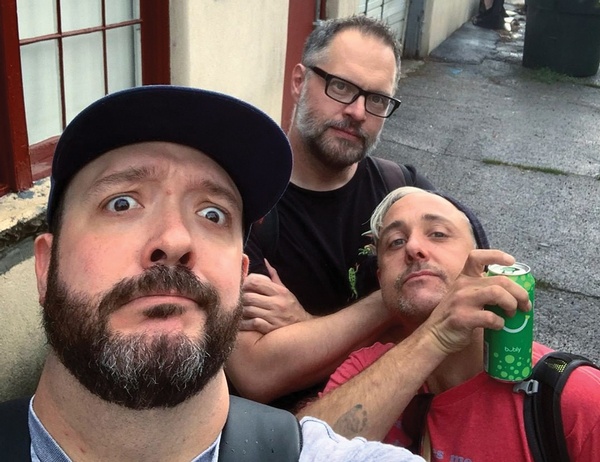 From left, Sean Moriarty, Bobby Noyes (background) and Aaron Brandes make up the local podcast "The Whiskey Reel." The podcast, which comes out every Tuesday, takes shots at everyone from bullies and Lauren Boebert to hipsters and even Elmo. It also takes shots of the drinkin' kind, reviewing a different brand of whiskey each week./Courtesy photo

Let’s face it. Since COVID, drinking alone at home just isn’t as fun as bellying up at a favorite watering hole alongside your best boozing buddies. But for those locals missing the barstool banter and whiskey-glass gesticulating, there’s the next best thing: The Whiskey Reel podcast. That’s right. Each week, you can listen in from your lonely man cave (or she shed) like a barfly on the wall for an 80-proof hour-and-a-half of old-fashioned fat chewing and political lampooning. Oh, and whiskey drinking and talking about whiskey drinking – but more on that in a minute.

The podcast, which started in January 2018, features Sean Moriarty, Bobby Noyes and Aaron Brandes – whom I suppose you could call three regular dudes but with a sense of humor as dry and potent as the whiskey itself. The idea first fermented with Noyes, 46, an IT consultant by day, who originally started the podcast with two different drinking dudes. The podcast was centered on the blurry concept of three guys sitting around, watching movies and reviewing a different whiskey each week. However, since they couldn’t actually show the movies due to copyright issues, the show ended up heavy on the drinking.

“It was a little hit or miss,” recalled Noyes of the early days. “We would just get drunk and by the end it was just a shit show.”

As luck would have it, Noyes soon stumbled (probably quite literally) on Moriarty, 38, who worked as a bartender at Steamworks, and Brandes, 48, the general manager for Homeslice and a certified sommelier (fancy word for wine expert). With a common background in the restaurant industry – Noyes once bartended at El Moro – the three got to talking, and drinking. And that’s when The Whiskey Reel began churning.

“We just hit it off,” said Noyes. “Our three voices just meshed together better.”

The three followed the movie-and-whiskey theme for a while, using the movies as a jumping off point for conversation. However, they soon realized they were somewhat limited by the premise.

“Somewhere we decided it wasn’t the best use of our talents,” said Brandes, aka “The General Manager of the Multiverse.” “Everything before episode 75 is either terrible or incriminating.”

They started adding new content here and there: sketches, fake commercials, music reviews, news commentary and even a research assistant, Carol. (Spoiler alert: Carol is really Moriarty with a spot-on Midwestern accent, something Noyes found himself having to awkwardly explain to a date who accused them of treating Carol unfairly.) The men also started wading into shark-infested politically charged waters, taking shots (no pun intended) at everything from Top That Yogurt (which they lampoon as “Top This” in a segment called “The Yogurt King”) to voter suppression and current parody darlings Lauren Boebert (“Boebert Barbie”) and Marjorie Taylor Greene. Not even hipsters or Elmo escape the politically incorrect wrath of the Reel. 4

“That Elmo thing did happen,” quipped Brandes. “I want that on record.”

As the men tell it, the podcast didn’t start out tackling controversial topics – it just sort of rolled in that direction after Noyes had a “kerfluffle” with another business in town.

“We have a deep, deep seated hatred for bullies,” explains Brandes. “That’s why we stand up for our cohorts. There’s so many more opportunities, we just couldn’t help ourselves. There seems to be so many bullies out there.”

When asked if the jabs have landed them any angry pitchfork mobs or sidewalk protestors outside their houses, the answer was somewhat of a disappointed “no.”

“Unfortunately, we haven’t had any negative response, but we’re dying to,” said Noyes, adding that even an angry listener is still a listener.

So far, the controversy has mostly been confined to social media, where “keyboard warriors” want to get in their two cents from the anonymity and comfort of their own homes.

“Sean and Bobby have had some legendary conversations with people on social media,” said Brandes. “But I believe we are going to be on the right side of history.”

And then there’s the whole Bradenton, Fla., mystery. About a week ago, the men noticed a big uptick in downloads from Bradenton, a fairly nondescript coastal town south of Tampa.

“More than anything, we were just confused – we were hoping it was a militia group,” said Noyes.

The men dedicated part of their podcast to reaching out to Bradenton and even filmed a short tourism video for the town for their Facebook feed. (Hey, Bradenton, if you’re out there – call us.)

In addition to the greater Bradenton area, The Whiskey Reel has also seen an uptick in traffic locally and throughout the region (it’s hosted on Soundcloud). In fact, it’s taken off so much that Moriarty has decided to make it his “second full-time job” in addition to co-owning Animas Marketing, a digital marketing firm in town.

“I’m not sure if saying that will help or hurt,” he said of disclosing his day job.

And as the podcast – now at 134 episodes and counting – has evolved, so has the format, which has entailed cutting back on the drinking. A good thing, according to Noyes.

“We break the podcasts into two parts and record in one shot,” he said. “What happens is, you end up drinking two bottles of whiskey, more or less, in one day. By the end, we were slurring words and in our cups. Inappropriate things are flying out of our mouths.”

Added Brandes: “It definitely doesn’t lead to great content crying about your divorce. I did that for six episodes.”

So now, they keep it to half a bottle per show. “That’s what we drink before we start drinking,” said Moriarty.

As for the divorce counseling, well it’s still allowed, but there’s a time and place for it. At the end of each podcast, there’s a segment called “Clutch Your Pearls of Wisdom,” where the men reveal something personal – a little “peak behind the curtain,” as Brandes put it.

“It’s an opportunity to make it genuine and end on an uplifting note,” he said.

And so far, for all their work, the men have made … not a cent. But they’re hopeful a podcast mogul will hear them and “gobble” them up.

“It’s not exactly the craziest thing. So if anyone’s out there … I gotta get out of the restaurant industry,” said Brandes (who I’m sure was joking in case Lynn or Corey are reading this.)

In the meantime, they say they’ll settle for a gift card to their favorite place on Earth, Star Liquors, and to keep doing what they love.

“We just enjoy it so much,” said Noyes.

Added Moriarty, “We love pop culture – and making fun of it.”

So as long as there’s pop culture, Lauren Boebert and whiskey, the Reel will keep turning.

To check out the Reel in all its listening options, go to: linktr.ee/whiskeyreel 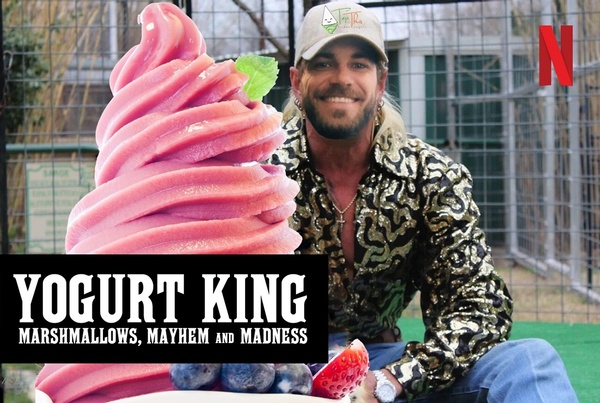 The Whiskey Reel's parody of a local froyo slinger and slur hurler.