Brain training
Stressed out? Anxious? Here's how to gain control of that monkey mind 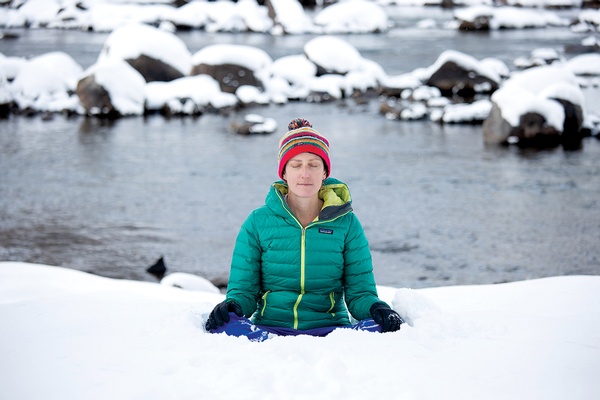 You don't have to go to the lengths of local meditation guru Kate Siber, above, to get some peace of mind. Siber as well as other local mindfulness coaches are offering meditation training that you can take via Zoom from the warmth and safety of your own home./Photo by Jennaye Derge

Holding it together has been difficult over the past several months. So, when I got an invite to take a Zoom meditation class, I was a little reluctant. In no universe could I see myself sitting at my computer and successfully avoiding my work emails, let alone “centering” myself with mindful meditation. But, thanks to local meditation leader Kate Siber, I did.

Siber is a writer, lover of the outside, all-around bad ass and, more recently, dharma leader in training. She is also one of the only people in this world who could convince me to sit with my eyes closed in front of my computer screen on a Wednesday night to meditate with a “Brady Bunch” grid of strangers. While emails flooded my inbox and the world crumbled around me, I attempted to meditate to the sound of Siber’s computer voice, interspersed with refrigerator hums and dog snores.

Meditating at home is already hard, but lucky for me, I wasn’t alone in my struggle. It turns out, at the beginning of Siber’s meditation journey almost a decade ago, she was similarly cautious when it came to the idea of meditation and mindfulness. Her first experience, although not a Zoom call, was with a friend who wanted to have a casual meditation before dinner one evening – a Zen appetizer, if you will. They went to the nearby Durango Dharma Center and sat in a room with a group of strangers.

“I wasn’t sure what everyone was doing,” Siber recalled with laughter. “Everyone was just sitting there with their eyes closed.”

Any meditation newbie would probably mirror the oddity of that experience, too. On the surface, it really is just sitting around silently with your eyes closed. But Siber was lucky enough to have the inkling there was something deeper.

In 2013, a few months after her first experience, the inkling grew into a fire, and Siber soon began attending weekly meditations at the Durango Dharma Center. In 2014, she dove deeper, attending her first retreat at a residential center, lasting five nights, giving her a sense of multi-day meditation.

She followed this path for a few years – attending various long-term retreats – and became more involved in the Dharma Center, serving as a volunteer and board member. Eventually, she started taking steps to become a leader, and starting Feb. 1 – after a lot of practice and work – she will be welcomed onto the Dharma Council as an official dharma leader in training.

Siber said her journey has been long, and it has changed her – and continues to change her to this day. In as few words as she can muster, she describes it as “an epic adventure.” An adventure of internal and external distractions and subsequent findings, life-shattering epiphanies, and changing views on the world and individuals. If nothing else, though, it has been an  4 honest and humbling way to know herself better.

“Oftentimes what I found when I started practicing meditation in earnest was that my mind was anything but neat and tidy – it was pretty unruly,” Siber recalled.

That’s why meditation is called “practice.” Part of Siber’s position as a teacher is to remind people that it isn’t an instant cure all.

“A really essential part of coming to a meditation practice is to come with a willingness to be completely honest to see what’s really going on without trying to manipulate it to make it prettier,” she explained. “It’s as if we want to believe we are more put together than we are, but the freedom is in being with things exactly as they are and not needing things to be different in the moment.”

I, myself, needed to wrap my brain around this during the online class. The jam-packed idea of meditation has enough nuances to make anyone’s head hurt. But thankfully, we have a few gurus in town, like Siber, offering meditation and mindfulness classes to relieve our headaches and help ease us into a more peaceful state.

Schmidt has been practicing mindfulness and meditation for about 20 years and, like many, started when she was seeking a salve during a turbulent time. She found solace in meditation and practiced on her own and with a Buddhist teacher and monks in Grand Junction, where she was living at the time. Local mindfulness instructor Cindy Schmidt has been teaching mindful meditation since 2015, switching over to internet classes last spring when the pandemic hit. While she agrees it can be different to show up to a class through the internet, she doesn’t see many downfalls with the digital switch. In fact, she thinks online classes can be more inclusive for those who have a hard time making it to a class or don’t live nearby.

Her prominent goal was to help herself, but after a friendly coax into a teachers training program – and despite her adversity to public speaking – she quickly developed a love for helping others. Eventually, she became a teacher in meditation and mindfulness courses to help those dealing with life’s unwavering stresses and struggles.

“Personally, I think we could all use (mindfulness and meditation),” Schmidt said. “Especially with everything going on right now.”

Yes, it’s true, we probably could all use more of the “double “M’s,” but what is the difference between the two and how are they related?

Mindfulness, according to Schmidt, is living intentionally and in accordance with our values. “In a sense, it’s really being able to be present in the moment without judgement of our thoughts and our feelings that are arising, and being able to make choices that are beneficial for ourselves and others,” she explained.

Meditation, on the other hand, is the tool used to get us there, she said. We use meditation to train our attention, to focus and concentrate on what we want to instead of letting our “monkey mind” drag us around. Meditation helps clear up the chatter.

Having taken both Siber’s and Schmidt’s online classes, the concept of a monkey mind is one I understand well. Admittedly, it is hard to ignore the email, phone, dog and rumbling stomach while trying to be quiet and still. It’s easy to go off on trails of thoughts that lead to stress and anxiety. This, in turn, leads to feeling bad about not properly focusing and then feeling bad about feeling bad.

According to Schmidt, this is another area where mindfulness can be helpful: settling into the difference of false judgements and facts.

“It’s not that we don’t have any judgements at all because we wouldn’t be able to function in the world if we didn’t … but there are beneficial and appropriate judgements. It’s all those other inaccurate projections that don’t serve us well,” she said.

Basically what she means is that sh*** happens (i.e., COVID and all of 2020). But, instead of freaking out, we can accept the existence of bad events, push through them without labeling, reacting or judging in a negative light, and then breathe a sigh of relief when we don’t let our bad feelings take us down a bottle of wine under a blanket.

And after the hangover of 2020, mindfulness is sounding pretty good right now. Perhaps we all could benefit from sitting down, getting quiet, logging off and logging in.

“I think it really is an integral part of finding happiness,” Schmidt said. “We all want to be happy, we don’t want to suffer. That’s where (meditation) is so beneficial and helpful. It’s the tool and skills to be able to lead a genuinely happy life.”

• The Dharma Center offers weekly sitting meditation and dharma talks on Monday evenings from 5:30-7 p.m. Currently it is on Zoom. All are welcome. You can find the link at durangodharmacenter.org …The Center also holds beginning meditation classes three times a year.