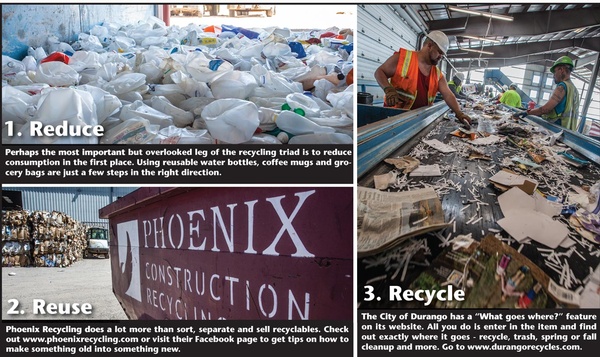 Fay Fisk has been in this business for almost 30 years. She started out as a forester and today works as a broker, buying and selling recycled goods for companies like Phoenix Recycling.

Recently, she attended a meeting of i dustry professionals in Arizona. People from all over the Southwest attended, including members of the Navajo Nation, municipalities, small and big business owners, recycling groups, university representatives and more.

What really surprised the veteran of the recycling industry was the number of people who attended, especially on such short notice. She said the meeting was the most
well attended one she’s witnessed in years. The reason everyone made the trip was to talk about what Fisk called “the big stick in the room” – China.

In the summer of last year, China announced a new policy called National Sword. The country is no longer buying cheap plastics or mixed paper, and the limitations it’s placed on single stream recycling, cardboard and other recyclable materials is severe. Many in the industry, including Fisk, say the new regulations are impossible to meet.

Some attribute the country’s new policy to a sudden spark of environmental inspiration; others not so much. Only China’s leaders really know what motivated this recycling renaissance, but regardless of  motivation, things will never be the same.

“How do you chart another course?” Fisk asked. Because a new course – both in the short term and the long term – is the only way forward.

One of the things China’s absence from the marketplace has revealed is just how much material Americans – and other wealthy countries – consume.

Recycling became so simple over the past several decades, people could purchase almost any package at the local grocery store and know it would eventually end up back at the same store, maybe as another milk jug, cereal box or water bottle.

Now, things will need to change.

“Recycling has to be done with a lot of integrity,” Mark Thompson, owner of Phoenix Recycling, said. “When we pick something up from a customer’s doorstep, there’s a level of trust. The customer’s expecting us to do something with it.”

Thompson said that if he collects items but has no way of turning them into something else, then he’s misleading his customers. Not only would he be breaking their trust, he’s not giving them an opportunity to change their habits.

If he’s honest with customers and tells them there is no market, then they can make the change.

“If they know it’s not going to be recycled, maybe they’ll choose to go a different route,” he said.

Two habits highlighted by China’s new policy are tendencies toward contamination and the increasing use of cheap plastics.

One of the limitations China placed on imported recyclables with the National Sword policy was a 0.5 percent contamination rate, which industry experts say is practically impossible to achieve.

According to Joey Medina, recycling and trash manager for the City of Durango, contamination is an ongoing problem. Residents have even gone so far as to put car parts in their blue recycling bins, including transmissions and bumpers.

At Phoenix, they’ve found everything from watermelons to toys. The worst, though, is dog poop. Recently, they discovered a bag of dog poop in the single stream recycling. Not only was it an unfortunate find, but it contaminated 100 pounds of recyclable material – all of which ended up in the landfill.

Aside from the unusual finds and what the industry refers to as “aspirational recyclers” (those who aren’t sure if something is recyclable, so they toss it in the bin in the hopes that it might be ... and cause a lot of problems along the way), the worst contaminant is glass.

The City of Durango collects glass bottles separately from its single stream program. Those bottles are sold to the Rocky Mountain Bottle Co. in Wheat Ridge, where they likely end up as a bottle for Coors, its parent company.

But if just one of those bottles is left in the blue bin, it can contaminate an entire bundle of single stream, sending it all to the landfill.

Thompson said the real challenge is to actually recycle all the items that have been recyclable for the past 50 years. All those items – paper bags, cardboard boxes, and simple No. 1 and 2 plastics, which include milk jugs and laundry detergent bottles – still have a home in today’s marketplace. It’s the newer items that are piling up without a buyer, like the No. 3-7 plastics. Facilities, like Phoenix and Friedman Recycling, in Albuquerque, are having the most trouble finding a home for those items. There’s just no market for them.

“Six months ago, we were able to recycle that plastic, now we’re not,” Thompson said. “I have a feeling unless something significant changes in the next few months, the local programs may pull back from that material.”
In the meantime, both Phoenix and Friedman Recycling, where all of the City of Durango’s single stream recycling ends up, are looking for buyers.

Friedman Recycling’s CEO David Friedman said since China’s National Sword program began in January, the country has purchased half of what it did just a year ago. The cost of recyclable materials has plummeted, and his operating costs have doubled.

“If cities want to maintain a curbside recycle program, costs are going up. There’s no way around that,” he added. Like many other companies, Friedman is finding homes for some of the single stream products in Korea, Vietnam and Malaysia. But, this is a short-term fix, so they’re also moving into new markets and building relationships in Central and South America.

Even Chinese companies are looking for ways around their country’s own limitations. Several have already purchased paper mills, plastics facilities and other plants using recyclable materials in the United States. One example is Nine Dragons Paper, a Chinese company that recently purchased paper mills from Canadian company Catalyst Paper. The mills are located in Maine and Wisconsin.

“To see Chinese paper companies start producing here in America – that’s a major shift,” Friedman said.
He’s been working in the industry since he was a teenager, sorting recyclable material in the plant, which was once owned by his father. Decades later, he’s running the business alongside his brother, Morris, and witnessing one of the biggest changes the industry’s ever experienced. “We just hope this bump in the road won’t dissuade people from doing the right thing,” he said. “Please, don’t stop recycling. Please, don’t give up. We’re confident the market will come back.”