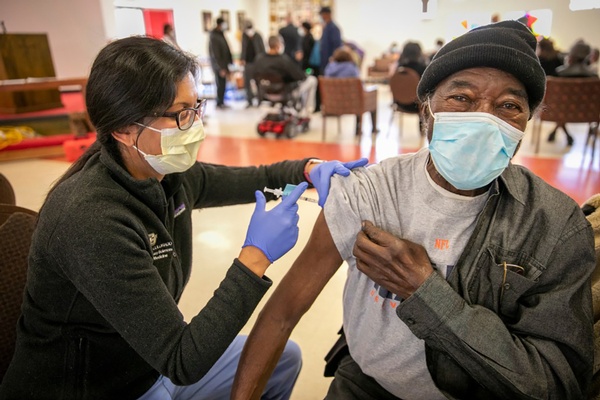 Vaccinations are limiting the spread of the coronavirus in the Colorado communities where they are being most accepted.

For the state’s 10 largest counties, for every 10 percent increase in the number of people vaccinated, Herlihy said there’s a decrease of 51 cases per week per 100,000 people.

As counties hit herd immunity, we might see the pandemic end “at different times in different communities,” she said.

“To be clear, (the pandemic) hasn't ended anywhere yet. But by these numbers, some communities will reach herd immunity levels before other communities,” he said.

Polis noted that Boulder and Jefferson counties are nearing 65 percent vaccination, and as a result, there’s now a “decreased circulation of the virus in those communities.”

Polis was in El Paso County and Pueblo last week, trying to drum up interest in getting vaccinated. “There's no place in the state that it's easier to get vaccinated than Pueblo, Colorado,” he said.

The governor stressed that most counties still have a ways to go.

“We need to be somewhere closer to that 70 to 80 percent range,” he said, “where the virus simply no longer has enough hosts to spread effectively.”

Although the vaccination trend is good news, other state virus indicators are more troublesome. The one-day positivity rate is now 9.65 percent, the highest level in months. Rates are increasing most among children and teens, who made up 26.43 percent of all cases, or 2,953, in the state the week of April 18. In addition, hospitalizations recently popped above 600, also their highest levels since January. Herlihy said the higher hospitalizations are likely driven by the more contagious U.K. variant, which is now the dominant strain in Colorado.

Polis stuck to the message he’s been sharing for weeks: if you want to see the end of the pandemic, get your shots now.

“If you haven't yet been vaccinated, you are at very high risk for contracting this virus,” he said, reminding those who aren’t yet fully vaccinated to avoid social interactions. “If you are (vaccinated), you can certainly breathe easier.”

Polis said he was hopeful the Pfizer vaccine, now only available to people 16 and older, will be approved for 12-to-15-year-olds in time for the new school year in the fall. He also announced most of Colorado’s large community vaccination sites, including the San Juan Basin Health site at the La Plata County Fairgrounds, will now accept walk-ins without appointments.

“If you don't set one up or just don't feel like using the internet, or you're just driving by … don't worry about not having an appointment,” Polis said. “You can get vaccinated and you'll be done in 20 minutes.”

Local content was added to this story. For more from Colorado Public Radio, go to www.cpr.org.