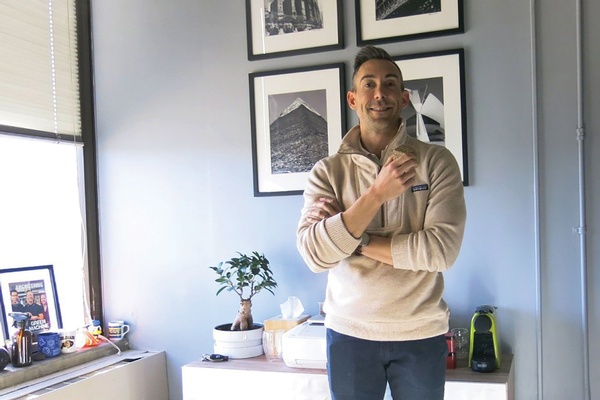 University of Colorado Boulder Structural Engineer Wil Srubar holds a building brick he developed that has cyanobacteria, which has been proven to absorb the heat-trapping gas carbon dioxide./ Photo by Grace Hood

Heat-trapping gas that can seep from Colorado buildings is the third-largest source of emissions statewide. It’s a concern for environmental groups, which are rushing to restrict natural gas inside homes and make office buildings more energy efficient. While that’s the most obvious avenue for change, one engineering professor at the University of Colorado Boulder has a different approach that could maximize emissions reductions.

Engineer Wil Srubar is creating new potential building materials that could one day suck carbon dioxide out of the air.

Deep inside the lab, Srubar is using temperature and humidity to grow bacteria, which, when mixed with sand and other materials, can create a “living” brick.

Here’s how it works: The mix sucks C02 from the atmosphere while forming a rigid structure that’s strong enough to bear loads similar to regular bricks.

Srubar, who was co-author on a paper about the subject. “We’re using biology to grow materials that we choose to build with.”

The bricks look like a type of cement mixed with coarse sand, but they’re sturdy enough to stand on. They can take up many shapes, and under hot and humid conditions, these bricks grow. That’s because they contain living bacteria. Also, these bricks can multiply on their own using cyanobacteria. Under the right conditions, they can absorb C02.

If the bio bricks eventually replace steel and cement in building construction, they could yield another benefit: Even more reductions in C02. Manufacturers of both steel and cement emit a lot of carbon dioxide when they produce the materials.

“It’s pretty crazy,” said Srubar. “You can leverage the exponential growth of bacteria to exponentially manufacture materials. So you can split one brick into two. Two into four. Four into eight.”

Srubar developed the concept with a team that included other engineers, a biochemist and graduate students. The paper was published in the journal Matter.

To read more from Colorado Public Radio, go to www.cpr.org.