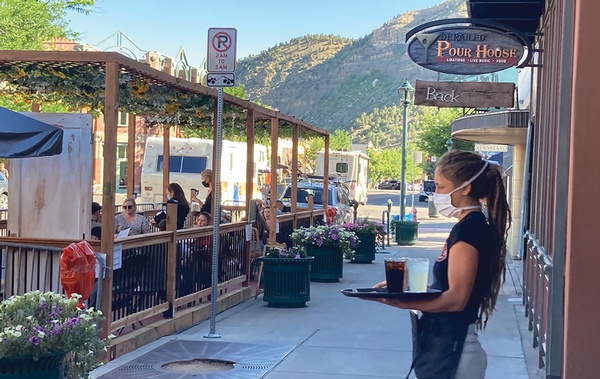 A server brings drinks to diners seated in one of Main Avenue's bump-outs last summer. Durango received a $50,000 grant from CDOT's "Revitalizing Main Streets" program to help convert traffic lanes and turn parking spots into outside seating. The program was so well-received that lawmakers recently put another $30 million toward it./Photo by Missy Votel

A state program that helped Colorado cities convert car lanes to restaurant dining space and pedestrian malls in their downtowns is about to get a big boost.

Both chambers of the state Legislature have approved more funding for the Colorado Department of Transportation’s Revitalizing Main Streets program, which aimed to help businesses during the height of the pandemic last year. The bill would shift $30 million from the state’s General Fund to that program and also allow CDOT to expand its Denver metro-focused Safer Main Streets program statewide.

Conor Cahill, a spokesman for Gov. Jared Polis, did not explicitly say if and when the governor will sign the legislation. But he said Polis is “grateful” to the Legislature for prioritizing the funding.

The package is part of Polis’ $1.3 billion stimulus proposal to aid the state’s economy.

“It’s very timely right now,” Sen. Rachel Zenzinger, D-Arvada, one of the bill’s sponsors, said. “It not only helps us with one of CDOT’s main goals, which is tackling projects that improve safety. But it’s also recognizing that our business community and our communities in general are just really struggling because of the pandemic.”

Some Republicans opposed the measure, saying the state should spend its resources on highways instead.

“We need to get some highways fixed so we can get people to downtown,” Rep. Perry Will, R-New Castle, said during a floor debate March 4.

Thus far, CDOT has distributed about $3 million through the Revitalizing Main Streets program to about 50 cities and towns. Last year, Durango used a $50,000 grant from the program to help convert Main Avenue from four to two lanes, and turn parking spaces into bump outs for outdoor dining and other businesses.

“One of our downtown local bookshops brought in some trees and they had a little garden in their area,” she said. “It was just a really nice kind of sunny, summery festival, fun, outdoor vibe.”

Durango and Southwest Colorado was a destination during last summer’s road trip renaissance. Hill says from June to November, sales tax income for the city actually increased over 2019. The city will repeat last year’s program this year and might go even bigger.

“We are exploring the idea of maybe doing weekend shutdowns almost as a trial to see what some sort of a pedestrian type mall would look like on Main Avenue,” she said.

In Breckenridge, the city closed Main Street to vehicular traffic entirely. Mark Johnston, the city’s assistant public works director, said sales taxes slumped a bit in the fall but were “solid” over the summer.

“For the most part, we received positive feedback from locals, visitors and the business owners themselves,” Johnston said.

The town received two CDOT grants: one to purchase barriers for the Main Street closure and another that added lighting to 175 trees along its River Walk corridor this winter.

“It’s inspiring to see so many communities across the state, both large and small, get creative and resourceful to enhance safety, improve the local environment and support economic vitality,” CDOT Executive Director Shoshana Lew said in a statement. “We’re thrilled to expand these initiatives.”

Sitting at a table on what was once a parking spot outside the Trailhead Taphouse in Golden, Lakewood resident Dana Sadowski said she visited some of Colorado’s new “car-lite” and car-free main streets last year – and she’s looking forward to doing that again this year.

“It can get crowded in some of these tourist towns,” she said on a recent sunny afternoon. “So if there’s more space to walk, that’s helpful.”

Sadowski said the converted thoroughfares reminded her and her husband of European pedestrian malls and plazas they’d seen in previous travels. If more Colorado cities and towns emulate those, she said, then that would be at least one good thing to come out of the pandemic.