Bushels & bears
Instead of tempting ursine invaders, local harvest could help those in need 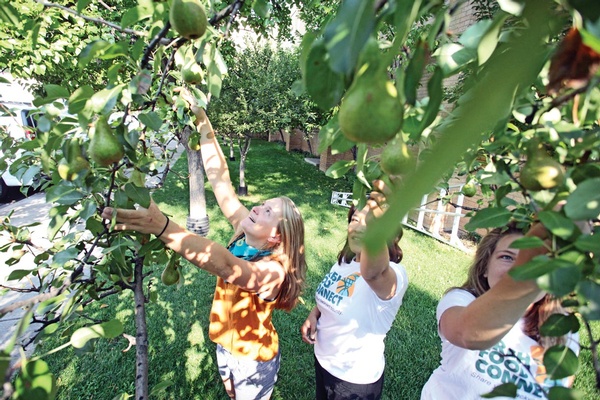 Rachel Landis, left, picks pears from trees outside the Smiley Building on Tuesday morning. Fruit from the property will be taken to area food banks and other communities in need - before any bears come calling./Photo by Stephen Eginoire

One in four kids in La Plata County worry about their next meal. At the same time, 36 bears were killed in the county last year; 25 of those within city limits. It turns out, there is a way to improve both of those numbers – and it starts with fruit trees.

Without a late spring frost to take out the blossoms, this year’s fruit crops are epic. Some have already fallen off the trees, like apricots and cherries. While others, like apples, are weighing down limbs before they’re even ripe for picking.

One local population is keenly aware of this fact – black bears.

Every year in August, black bears begin hyperphagia – the time when they start to pack on the pounds ahead of hibernation. During this time, the average bear consumes 20,000 calories a day – which takes a whole lot of acorns and chokecherries, their typical fare.

Thus, when the hunger pangs hit, some start seeking out other high-calorie options. That’s when they end up in the

back yard, tearing down the bird feeder and rummaging through the trash – the No. 1 attractant for bears.

It’s one of the reasons the City of Durango requires residents to get a wildlife-resistant container if a bear gets into their unsecured cans. This requirement comes with a $100 fee for delivery of the new can, too.

In La Plata County, animal control officials will give violators a fine of $200 for letting bears into trash. If residents get a wildlife-resistant container, the fine can be waived.

(Bear-resistant trash cans are available from the city and all three of the county’s waste-haulers: Phoenix Recycling, Waste Management and WCA Transit Waste.)

While it can sometimes be a novelty for residents and visitors to see a bear in the yard, it can quickly become a

safety concern. Often, problem bears ultimately have to be put down. The best way to keep this from happening is to not attract them in the first place by keeping trash secure, pet food inside and the bird feeders put away during the months of hyperphagia.

The other way to make a difference, according to Peterson, is to call when bears are seen in yards or trash. Residents may be afraid to make the call, he said, but those calls can help city and county officials address the situation before bears become a problem.

Other things that keep bears coming into town are, of course, fruit trees. Peterson, who founded Bear Smart in 2003, said what really gets bears into trouble is when they damage the tree.

Ripe for the pickin’

To address this, several years ago Bear Smart began a fruit gleaning program. Residents across the county can go to fruitglean.org and list their trees. Then other residents who are interested can find out where to get it.

Rachel Landis, director for The Good Food Collective, said the program doesn’t just help reduce human/bear conflicts, “It connects us to the land, the food and the bounty that is here.” purchase ends up in the trash.

This isn’t just bad for those who need it, it’s bad for the environment. The greatest source of greenhouse gas coming out of landfills is from biodegradable waste, like food. Tied up in trash bags and rotting away, this type of waste emits lots of methane and carbon dioxide – instead of ending up on the plates of those who are food insecure.

In La Plata and Montezuma counties, Landis said, about 20 million pounds of produce goes unharvested each year. “There’s an abundance of fresh, local healthy food here,” she added. “The gap is distribution.”

One of the goals of The Good Food Collective, a Durango-based nonprofit, is to fill that gap. The Collective, which opened its doors about two months ago, has three programs to address the unharvested produce: the fruit gleaning program (which they’re in the process of taking over from Bear Smart); the new community gleaning program started with the grant funds; and Fresh Food Connect.

While the fruit gleaning connects private citizen to private citizen, the new community gleaning is able to expand to larger crops with a team of harvesters, hired using the grants, one from the USDA and another from a local business, the Payroll Department.

“The biggest addition is the ability for gleaning crews to go out and address bears getting into fruit trees,” Peterson said.

Instead of posting the trees on the fruit gleaning website and waiting for a response, he explained, crews with The Good Food Collective will be able to respond immediately.

The third part of the puzzle is Fresh Food Connect. It’s actually a national program, and Durango is the first Colorado community outside the Front Range to participate.

Landis, who ran the Environmental Center at Fort Lewis College for five years before taking on the new nonprofit endeavor, said the program is geared toward back yard gardens with extra produce.

Locals can sign up and let the Collective know when they’ve got extra food to donate. Then she and her team will come by – using their new electric tricycle – to pick up the produce and deliver it places such as the Manna Soup Kitchen, Durango Food Band and Mancos Food Share.

Their new vehicle, or etrike, is a pedal-assist tricycle, much like a pedicab. Instead of a seat for passengers, though, it pulls a large storage container to fold the fruit and vegetables. It can haul up to 700 pounds of produce and has a range of 40 miles, according to Landis.

If there’s any extra produce, the next stop is local businesses. Apples have ended up at Fenceline Cidery in Mancos, and plums in the ice cream at Cream Bean Berry or a dessert at the Ore House.

“The whole point is to get that food into the community,” Landis said.

And, all the while, it’s helping to decrease human/bear conflicts by reducing their temptation to come looking for all that low-hanging fruit. 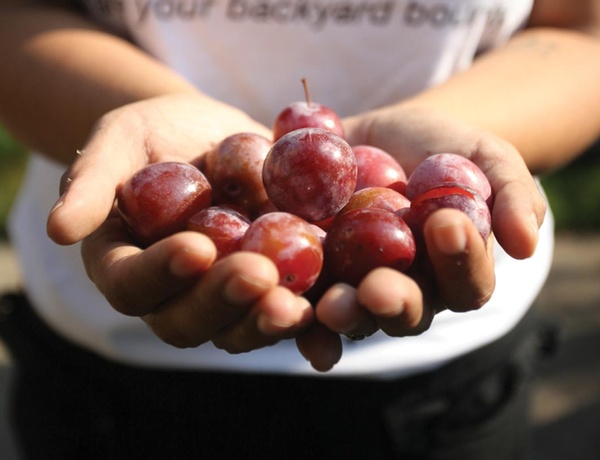 For more on black bears in Durango, check out Bear Smart Durango at www.bearsmartdurango.org. Bear Smart can answer questions, offer tips for being Bear Smart, or even assist with electric fencing for fruit trees or chickens.

Want fruit? The Good Food Collective’s fruit gleaning program is free and open to everyone. Find someone on the list and pick up extra fruit for a fun family outing, or get in touch with the collective’s director, Rachel Landis, for a group harvest. Landis said the collective is looking for volunteer harvesters and, it turns out, lots of ladders.

Also, if you’ve got a backyard garden with more produce than you can use, donate it to those in need by signing up at freshfoodconnect.org.

More from the garden ...

Get squashed for the 4th annual Zucchini Extravaganza at the Pine River Library in Bayfield this Sat., Aug. 18, from noon- 2 p.m., hosted by the Pine River Community Garden Club.

“This event is for the entire community, not just the ‘over-squashed’ gardeners,” Darcy Poletti Harp, programming librarian, said. “We want everyone to bring in their award-winning