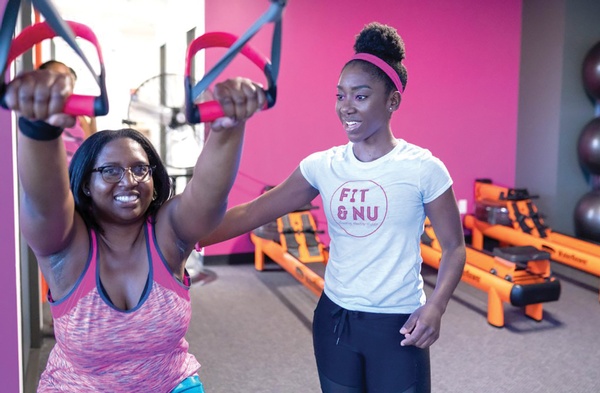 Brittney Rae Reese, right, coaches a client in the before times at her gym, Fit & Nu, which she owns with her sister in Aurora. The pandemic forced the women to move their fitness and wellness classes online, and now they must decide whether or not to return to their 2,500-foot gym./ Photo courtesy Brittney Rae Reese.

The economic toll of the coronavirus can be told in numbers. Colorado lost about 376,000 jobs in the first three months of the pandemic and is still down about 160,000, according to Brian Lewandowski, executive director of the business research division at the University of Colorado’s Leeds School of Business.

Tourism, mining and the foodservice industry were among the hardest hit.

While the economy cratered then bounced back more quickly than in previous recessions, growth slowed again in the fall. With vaccinations on the rise and restrictions being lifted business owners are more confident than they have been, but a real recovery will take a while, he said.

“I think that we’re at this point that it’s going to be hard to recover the remaining jobs until we reach some sort of herd immunity in this country,” Lewandowski told “Colorado Matters,” CPR’s daily news show. “We need our businesses to be able to reopen at full capacity. We need people getting on planes again and filling up our hotels again, you know, taking those vacations again until we can recover those jobs lost in the tourism industry.”

The economic story can also be found in personal experiences: a theater director who closed his 300-seat playhouse and found a way for the show to go on; a gym owner who became camera operator, lighting tech and video star when she took her business virtual; and a restaurant server who found new hope with a shot in the arm.

The show must go on

In a normal summer, tourists who flock to the mountain town of Grand Lake spend most of their daylight hours outside. At night, though, the Rocky Mountain Repertory Theatre is a star attraction.

The house seats 300 people for Broadway musicals – 20,000 customers altogether in a good year, which 2020 was not. Executive Artistic Director Michael Querio had already hired cast and crew and sold tickets last spring when he had to call off the season. He told workers not to come because he couldn’t pay them. He refunded tickets that had already been sold or rolled them over for another season.

Having told the summer workers not to come, he had 50 units of employee housing open. He reached out to people who’d worked for the theatre through the years,  knowing most would be out of work, and offered them a place to stay.

“We called it an artist’s colony,” Querio said.

Those who came essentially sang for their supper. Querio organized performances on the theatre’s patio (with a socially distanced capacity of 40) once or twice a week.

And while Rocky Mountain Rep’s crowds stayed small, the town of Grand Lake bustled. “Sometimes you would think there was a parade going on by how many cars were inching into town,” Querio said. “Many business owners said they had the best summer they’ve ever had.”

Colorado Tourism Director Cathy Ritter is familiar with the phenomenon. Outdoor tourism soared while other parts of the industry, including hotels and arts venues, suffered. Now surveys show many people are eager to travel, but a full rebound is years away. Many businesses have failed, others are hanging by their fingertips and the industry will have a tough time getting its workforce back, she said.

“I think it’s very doubtful that things are going to snap back to the way they were back in 2019. We’ve all been through some profound changes in this past year.”

A pivot and a community trauma

Brittney Rae Reese and her sister founded their wellness business, Fit & Nu, six years ago on Aurora. Reese coached fitness classes in their 2,500-foot facility. Her sister ran their nutrition program. Women of color were their target audience.

Then the pandemic hit.

The sisters closed their doors, changed their business model and went virtual. Business was reasonably steady until the summer when George Floyd and Breonna Taylor were killed, and Fit & Nu’s clients struggled.

“That shifted the mood to where we started to see that clients weren’t signing on as consistently and you know they needed time to just grieve and just to process what was going on in the world,” Reese said.

In response, they launched a live Instagram show to talk about the issues and offer encouragement.

Throughout the last year, the Reeses have expanded their social media and video offerings and done everything they could to draw attention to their business. Now they’re deciding whether they can make a profitable return to the gym or will switch permanently to the virtual model.

Makisha Boothe, the founder and head coach of Sistahbiz Global Network, a Denver-based nonprofit that supports Black women entrepreneurs, cites the Reese sisters’ Fit & Nu as an example of a company that’s innovated to stay alive. Even so, Boothe said Black women start at a disadvantage in forming their companies, partly because they lack financing and support systems that other businesses have. Entrepreneurship “is rewarding, it’s a beautiful journey but it is definitely not easy,” she said.

For restaurants, a shot in the arm

Colorado restaurant owners pushed for months to get their employees moved up on the state’s vaccine priority list. Now that shots are widely available, many in the industry have new hope for stability.

That’s the case, anyway, for Hanna Bull of Longmont, who was joyous – “So freeing and exciting,” she said – after she got her Johnson & Johnson vaccine.

Bull recently moved to Colorado from Charlotte, N.C., where she worked at an outlet for of the Denver-based breakfast chain, Snooze. When she moved to Colorado, she transferred to the chain’s Boulder location.

“My schedules have been nonstop...consistent,” she said “I’ve not been getting my hours cut, so these are all wonderful things. Things to be very, very happy for.”

Many restaurant owners say they’re more optimistic, too, but it’s come at a devastating price. Restaurants lost more than $3 billion and an estimated 93,000 jobs in 2020, according to Sonia Riggs, president and CEO of the Colorado Restaurant Association.

“It’s those gems – that are the local places that people put their blood, sweat and tears in for many years – that have suffered the most,” she said.

For many restaurateurs, today’s standard isn’t how profitable they are, Riggs said. “People’s new success is did I keep my restaurants open? And am I only down a little bit year over year?”