Buzzed & buzzin'
The Hive's free, late-night ride gets intoxicated drivers off the road 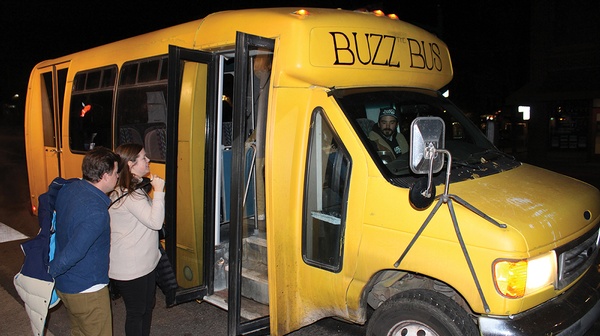 Riders board the Buzz Bus on Nov. 19, 2022. Once funded by the City of Durango, the Buzz Bus, which offers free rides home to bargoers, went dormant. However, The Hive, a local nonprofit, recently resurrected the service./?Photo by Jonathan Romeo

“We’re at the Ranch! No, we’re at the Starlight! Oh wait, no, we’re at the Garage!” the visibly intoxicated woman spilling out of a bar said as she was holding onto her friend for dear life lest she risk toppling over.

She was at the Ranch. There was a huge sign that said “El Rancho” right above her head.

Now, we cast no judgment on late-night revelers. Hell, we were in the exact same position the night before for The Durango Telegraph’s 20th anniversary party, so who are we to talk? But, we ask: would you want this person on the road late at night, after god knows how many White Claws? No, you don’t, and luckily, The Hive’s Buzz Bus was parked right there to scoop them up.

“We’re going to make Ramen tonight!” the woman said, now safely seated and ready for the next adventure.

“We’re going to make noodles and everything will be good.”

And thanks to the Buzz Bus, they were.

For years, the City of Durango funded a late-night bus option for bargoers that kept drunk drivers off the road. But, after a mix of low ridership and a lack of funding, the service went away in 2015.

This past spring, however, The Hive, a local nonprofit, purchased a 14-passenger bus and resurrected the offering, which is free of charge on Fridays and Saturdays (tipping the volunteer drivers is encouraged, though).

“We bought the bus for transport services, and in trying to name it, I said ‘Buzz Bus’ and a light bulb went off,” Kelsi Borland, executive director of The Hive, said. “I remembered the old service and thought we should offer that again.”

Ever since The Hive started running shuttles in May, the Buzz Bus has helped about 100 people per weekend safely navigate the journey from the bars to home … or wherever they choose to end up.

“Every weekend (ridership) can be up and down,” Borland said. “But even if it’s 20 riders a night, that alone is a success.”

Just so you don’t have to, I spent a recent Saturday night aboard the Buzz Bus to get an inside look. That night, the driver was Ricky Ryan. Shifts typically last from around 9 p.m.-3 a.m., or later. Like that one weekend, Ryan said, when a woman way too drunk to get behind the wheel needed to get back to her camp at Mesa Verde National Park, a more than two-hour roundtrip journey.

Ryan grew up in Durango and remembered the city’s old Buzz Bus. A snowmaker at Purgatory Resort, Ryan wanted to help out on his nights off. “I wanted to be like Otto Mann from the Simpsons,” he joked. “But I like helping people from getting arrested or hurting themselves or others.”

This night, Ryan is joined at the beginning of the evening by his friend Zach, who was just keeping his buddy company. “This is more fun than hanging out at the bars,” said Zach, a bouncer at the Garage. Zach said he has stopped very, very drunk people who were coming out of the bar and getting into their cars by giving them the Buzz Bus number. “This has saved people’s asses,” he said.

The first few hours are slow. Ryan drives the yellow bus up and down Main Ave., past the few late-night bars – the Ranch, El Moro, Starlight Lounge, the Garage, Roadhouse. One perk of a small town is the crowd is pretty concentrated in one area.

We park outside the Ranch, and within five minutes, we are offered “yip” and mushrooms. Yip, we learned, is slang for cocaine. But, based on the guy’s overly friendly and enthusiastic demeanor, we could have guessed. Though he was kicked out of the Ranch for throwing up in the bathroom, he was not ready to call it quits for the night, and we pushed on.

“I just like to roll around and keep the bus visible,” Ryan said. “It’s random how it works; out of nowhere, it’ll become crazy, usually around midnight.”

“Is this the Buzz Bus!?” one very excited Ranch patron said while entering into the cold November night. Aside from parking in visible locations, the Buzz Bus puts flyers up around town and leaves cards at bars.

Another couple boards the bus and declares a very matter-of-fact explanation for choosing not to drive drunk: “Our children are at home. And they are going to grow up alone if we don’t get home safe.”

The Buzz Bus rolls on, up to College Mesa and over to the 32nd Street neighborhood. While the service prefers to stay within city limits, drivers will usually go anywhere to make sure people are safe (e.g. the Mesa Verde thing).

Sometimes, however, it seems like the riders don’t even care.

“Excuse me, sir!” one woman bursts out (emphasis on the “sir!”) after being on the bus for  10 minutes, apparently waking from a drunken reverie. “Where are we going?”

“I could kiss you on the mouth.”

Services like the Buzz Bus do keep drunk drivers off the road, said Durango Police Cmdr. Jacob Dunlop. Especially with the popularity of rideshare apps, like Uber and Lyft, the City of Durango has seen a huge decrease in drunk driving since the mid-2000s, when there’d be 500-600 arrests a year.

That number is now down to 200-300 DUI arrests a year, but, of course, any are bad. Just this past year, it should be noted, two people died in Durango after being hit by drunk drivers. To-date, Durango Police have made 266 arrests this year, up from 210 during the same time period last year.

The holidays, such as … ahem … Thanksgiving, always see an uptick of drunk people on the road, Dunlop said.

“We always appreciate when people make responsible decisions and find alternative ways of getting home after consuming alcohol,” Dunlop said. “And I do believe services like the Buzz Bus have a positive impact.”

The Hive’s Borland hopes to keep the Buzz Bus going, but funding is a challenge. She estimated it would take about $30,000 a year to keep the service in operation, pay drivers and perform maintenance on the bus. The City of Durango has contributed $10,000 for a six-month contract, and The Hive has raised another $5,000 or so.

Halfway through the year, funding for the Buzz Bus is precariously on track.

“We’ve gotten a fair amount of donations and sponsorships, but I thought we’d get more,” she said. “I just need to find a little more support, because we’re not covering expenses. But it’s a service that’s needed, and we’re going to continue.”

That much is apparent as we approach 1 a.m. and the next round of calls comes in.

“Can you pick us up at the Ranch,” a woman asks (are you seeing a theme here?)

“I’ll be over in five,” Ryan responds.

“OK I love you, bye,” the woman says in a way where the “eeee” drawls far too long.

We pick up a group that looks just days over the legal drinking age. And, because it seems every generation randomly picks an item popular from the generation before to be the “it” thing, these kids are communicating,on the bus via walkie-talkie.

One young buck, trying his luck with the ladies, asks: “What’s your vibe in Durango?” It worked! “I’m a Pisces,” she says.

But the overall sense on each of these rides is a deep appreciation for a safe way home, at no cost (though it appears most were happy to tip). As any night owl in Durango knows, securing an after-hours ride can be dicey.

On one of the last stops (for me, anyway) of the night, the 20-somethings bid adieu to their friend Kyle, who gets off on a street on the grid. His friends, apparently saddened by hints the night was ending, lamented their departing friend.

“Dude, Kyle’s a boss; he’d spend the night in the gutter if he had to.”

Well, thanks to the Buzz Bus, he doesn’t.