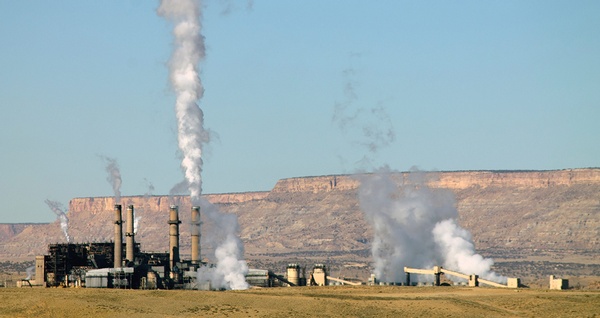 I think it’s actually going to happen: One of the Colorado Plateau’s biggest polluters is about to stop polluting. After nearly 50 years of belching tons upon tons of sulfur dioxide, nitrogen oxides, volatile organic compounds, mercury and planet-warming carbon dioxide into the air, the last operating unit on the San Juan coal plant in northwest New Mexico is shutting down for good at the end of this month.

It’s not exactly news, as the closure’s been in the works since 2017. But it hasn’t always been a sure thing. See, an upstart company called Enchant Energy and the city of Farmington have been conspiring for the last few years to hijack the closing plans, takeover the plant, keep it running (and polluting) as is until they can scrape up the cash to install carbon capture equipment, after which they would keep it running (and polluting) for an indefinite period of time. The scheme was always a long shot. Even so, officials from Farmington and Enchant Energy have continued to express confidence in the takeover.

So, yes, there’s still a possibility that the power plant will continue to run after Sept. 30, and maybe I’m jumping the gun to write this now. But the reason I’m doing so is because I received an email from Four Corners Economic Development announcing an employment fair in light of the plant’s closure for the estimated 225 workers set to lose their job. Westmoreland, the owner of the coal mine that feeds the plant, clearly is planning to shut down operations at the end of the month and lay off most of its workers. Unless Enchant is planning on getting its coal from some other mine, I’d say this is a good indication that the plant will shut down as planned.

That’s a good thing. It will significantly reduce the pollution burden on the people who live in the communities near the plant, from Shiprock to Waterflow, from Hogback to Nenahnezad, from Kirtland to Farmington. It should reduce view-obscuring smog throughout the Four Corners and less ozone-forming pollution in Farmington. And it’s not just air pollution: The plant kicks out millions of tons of solid waste – from clinkers to sludge to fly ash – every year that is tainted with mercury, arsenic and other heavy metals and can even be radioactive. It can leach into groundwater and seep into domestic wells and poison those who drink it or blow as fine dust into the air, settling on countertops and in peoples’ lungs. And it sucks up billions of gallons of San Juan River water each year – water that can be put to better use now. Carbon capture equipment would only increase water consumption.

But it’s also a major loss. Some 225 workers will lose their jobs in a couple of weeks. Those workers, many of them unionized, make on average $86,000 per year or more with benefits. Maybe some will find jobs locally with another branch of the energy industry, but many may have to move away for work, leaving holes in their respective communities. The local school district could lose dozens of students and more than $3 million in property tax revenue.

Beyond that, such an extensive operation needs services and equipment, much of which it acquires locally, as was revealed a few years back when Westmoreland filed for bankruptcy and its expenses became part of the public record. In just one quarter, the company spent $27,000 at a local shoe store, $47,000 at a machine shop and $118,000 at a soil remediation firm. One study found the plant had a $356 million per year economic impact (another says $117 million) – most of which will disappear when the plant closes. “Now your foundational economic driver is going down,” Arvin Trujillo, the CEO of Four Corners Economic Development, told me a few years ago. “It’s like a spider web, with the coal plants in the middle. When all these $70k to $80k jobs disappear, what do we do then?”

To help answer that question, advocates and state lawmakers passed the Energy Transition Act in 2019 to help the affected communities during the transition. It allows PNM to issue bonds to fund the power plant’s abandonment, which will include about $40 million for local economic development and displaced worker assistance, and another $30 million for coal mine reclamation, which should keep some workers employed. The act also requires PNM to build some of the replacement power facilities in the same area. Planned solar installations near San Juan Generating Station will help make up for some, if not all, of the lost property tax revenues and will provide temporary construction jobs and a handful of permanent ones.

The fossil fuel industry, for better and for worse, has had a tremendous impact on northwestern New Mexico’s economy, culture and even its communities’ identities. It has left scars and plenty of gaping, unhealed wounds. The boom-bust rollercoaster frayed the social fabric and the industry’s dominance stifled efforts to diversify the economy. But industry also helped build up a middle class and funded schools, libraries and infrastructure. And it held off the downsides of the amenity economy, such as ridiculous housing costs and predominance of low-wage service jobs.

That’s why Farmington officials and others fought so hard to keep the plant open. It’s understandable. But it has also distracted them from the necessary work of diversifying the economy and putting the pieces in place to ensure a just transition. Now, when the closure does occur, they’ll find themselves unprepared and far behind where they might have been had they read the writing on the wall years ago.

Now, the corporations that profited off of pollution for decades will exit unscathed, as will their CEOs and shareholders. The far-off cities that flourished on cheap power for so many years won’t even know that anything’s changed. And the same communities that were victims of the industry’s pollution and misdeeds will now be hurt the most by the corporations’ abandonment. That’s simply wrong.

So by all means celebrate the death of polluter. But also mourn the dearth of justice that’s inherent in the whole goddamned system.

The Land Desk is a newsletter from Jonathan P. Thompson, author of “River of Lost Souls,” “Behind the Slickrock Curtain” and “Sagebrush Empire.” To subscribe, go to: www.landdesk.org